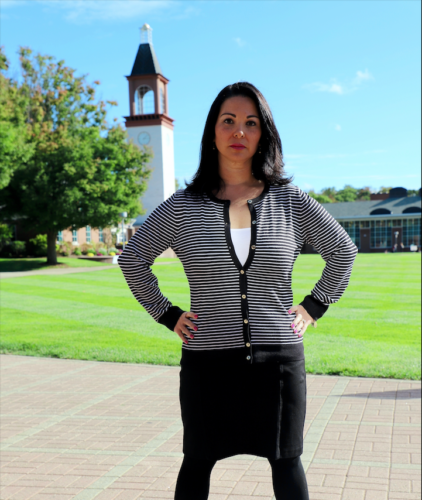 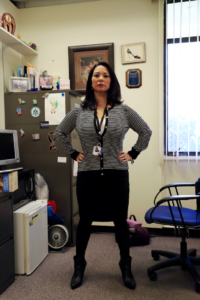 [/media-credit]Just as the class arrived for its computer information systems capstone that day, the mighty winter storm finally caused the power to go out. In the dim light of the hallway, not a soul moved, and instead looked to Professor Kiku Jones.

Jones calmly began to do roll call, picking a name from the middle of the list and calling it out. The moment the name rang through the empty hall, one student sprung up out of the chair into a dramatic pose and held it.

That was the moment, recounted by Jones, that sticks with her as the moment she decided to use the ‘power pose’ to invoke confidence in her pupils.

“When I first heard about the ‘power pose’ idea, I thought ‘let me try and roll this out,’” Jones said. “I saw what was happening and how (my students) were acting more confident. Every year since, it’s gotten better.”

Jones found inspiration in a TED Talk from American social pyschologist Amy Cuddy. In the TED Talk, Cuddy describes the power of confident body posture, which she calls ‘power poses.’ Jones saw the talk and decided to try it in her class for the year.

“I can see the change from nervousness and giggling at the start of the semester to the strong, fierce faces at the end of the semester,” Jones said. “I feel a lot of of students at the senior level have done all this amazing work and even they are not feeling quite that confident in all they have accomplished. I want them to feel empowered.” 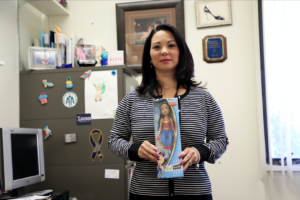 [/media-credit]As a result, Jones began to make her students ‘power pose.’ Some chose to channel super heroes. Jones herself names her pose ‘Wonder Woman.’ Some channel athletes and some just do what feels right. Then, when she does roll call, she will randomly call out names. Once a student’s name is called, they spring into their pose. Once all the names are called, students hold their pose for 90 seconds. Then the class begins.

“Kiku Jones is the type of professor you look for at a university,” Kevin Stefanak, a QU alum and former student of Jones’ said. “She not only challenges you to do your best, but she cares for each and every one of her students.”

Jones is an associate professor of computer information systems and recipient of the highest Quinnipiac faculty honor, the Center for Excellence in Teaching Award. The award is hung up on the front wall of her office, barely noticeable when the door is open.

Instead of the award, the first thing a visitor might notice are the pictures of her kids, family, and as she points out, her two biggest influences in her teaching style.

“I am a strange combo of the two,” Jones said. “They were really big influences on me.”

The picture shows two people leaning on one another. The first is her own professor of computer information systems from Western Kentucky University, Linda Johnson.

“She was a phenomenal and engaging professor,” Jones said with a smile. “I was more interested in learning from her than I was in the course material.”

Then there is the other man in the picture, Dr. Jack Stallard, one of her professors at Western Kentucky. She described him as a the man who inspired her to be a professor. He connected with his students by spending the first few minutes every class asking what everyone had for lunch, how their days had been and genuinely connecting with his students. 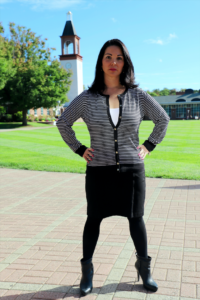 [/media-credit]Jones said she tries to have the energy and passion of Johnson while connecting with her students, similar to Stallard’s approach as well.

“I do everything to bring my students up,” Jones said. “I’m not trying to bring them toward my major, I’m trying to make them confident in themselves.”

Jones has certainly done what she set out to do, as her students, both former and current speak very fondly of her.

“Her care and dedication to her students’ development inside and outside the classroom leave an everlasting impression on all who take her class,” Stefanak said. “Professors like (Jones) are one in a million and an incredible asset to the university.”