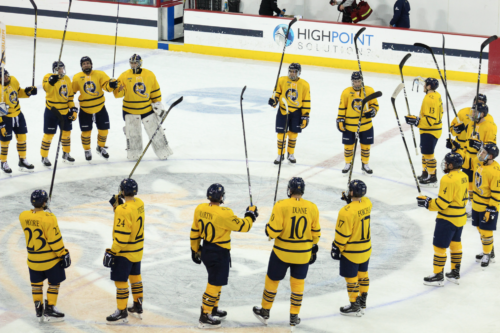 It was a big weekend for Quinnipiac men’s ice hockey. 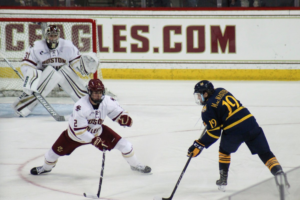 [/media-credit]In their regular season opener, the No. 14 Bobcats traveled to Boston College for the first time in program history and gave the No. 13 Eagles a run for their money, leaving Chestnut Hill with a tie, while hitting three posts in the process.

Sophomore forward Alex Whelan showcased a wicked release on his first goal of the season, sophomore goalie Andrew Shortridge had a stellar 25-save performance against a young, offensive team and altogether the Bobcats looked like a highly-competitive group in game one of the year.

“I think Quinnipiac will be more of a staple in our schedule from now on,” he said. “…I think we go there next year to play, so I envision that as one of our non-conference rivalry-type games as we go through the stretch here.”

Then on Sunday, Quinnipiac welcomed No. 2 Boston University to Hamden for its home opener. 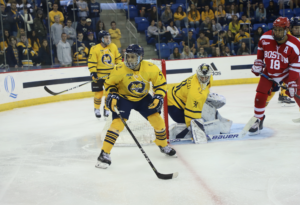 At least, they were good enough to force overtime against a premiere team in college hockey.

Whelan ripped another snapshot from the wing, senior center Kevin Duane played with a major chip on his shoulder against his former team and freshman Keith Petruzzelli turned away 31 of 34 shots in his collegiate debut. Noted, all three goals allowed came from chaos in the crease as a result of BU’s high-end, net-front presence.

Like York, Boston University head coach David Quinn made it known that even to a Hockey East powerhouse, Quinnipiac isn’t a team to be taken lightly.

“(Quinnipiac) is a team that certainly tests your physicality and toughness,” Quinn said. “Coming into a hostile environment against a big, mature, strong team that I know has a lot of talent and is well-coached, I’m really proud of the way we responded.”

Except on Monday, Quinnipiac dropped three spots in the USCHO.com national rankings to No. 17.

Yes, there is still a big, round goose egg in the wins column. But dropping that far down in the rankings after going head-to-head against a pair of Hockey East teams is simply unjustified.

An ECAC team playing to back-to-back overtimes against college hockey forces deserves more than that.

In the early goings, it’s clear that the Bobcats have two more-than-able goalies in Petruzzelli and Andrew Shortridge, possess a deep defensive core — as shown through the blue line’s ability to step up for an injured captain Chase Priskie on Sunday — and even when the forecasted offensive guns aren’t there on the scoresheet, secondary scorers have been able to contribute in relief. 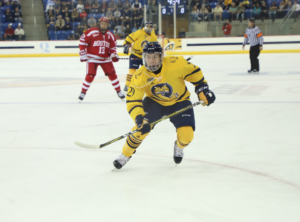 [/media-credit]Junior defensemen Brandon Fortunato and John Furgele have been sound on both sides of the ice, freshman Odeen Tufto has transitioned smoothly at the collegiate level and although he sees the least ice time out of the newcomers, freshman Matt Forchuk — to put it bluntly — isn’t a liability.

Add in the experience returning players offer, and things are looking bright for the now-No. 17 Bobcats early in the season, despite the lack of wins over the weekend.

“In two games to open up [against] two arguably top 10 teams in the country and we’d like a little better result, but we were certainly in both games,” Quinnipiac head coach Rand Pecknold said after Sunday’s loss. “If for a bounce here, a bounce there or a little better attention to detail, we come out with better results.”

The Bobcats have more to prove.

Even though it dropped further down in the rankings, don’t count Quinnipiac out moving forward.