Quinnipiac Athletics to have increased presence on ESPN3 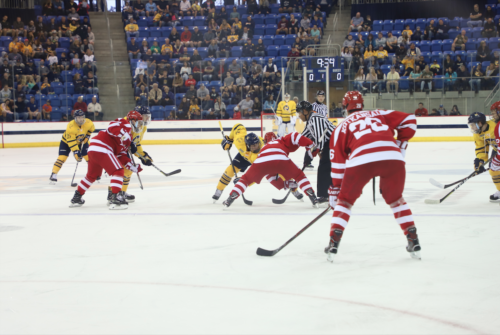 [/media-credit]There is growing speculation that the Quinnipiac Athletics department has an agreement with ESPN to air an increased number of games, specifically ice hockey and basketball, online through ESPN3.

[email protected]_WIH vs Providence (10/7) and @QU_MIH vs Boston Univ. (10/8) will be available on ESPN3.
Full slate of QU games on ESPN3 coming soon. pic.twitter.com/lmEwdXTqVT

“We have a unique opportunity this year with our Basketball and Hockey games and ESPN3,” Sumby said in the email. “The Athletic department is looking for [4 to 5] students to run camera for each basketball and hockey game at the TD Bank Sports Center during the season on a freelance basis…This is a great opportunity for some camera operation and to work with ESPN.”

Another change to Quinnipiac Athletics this summer was the hiring of Sharon Burke and George MacLellan.

MacLellan joins Quinnipiac after working in a similar position at the University of Hartford. At Hartford, MacLellan “coordinated the Hawks’ ESPN3 production as well as graphics, extensive highlight packages and feature content and social media content,” according to QuinnipiacBobcats.com.

Essentially, MacLellan worked with Hartford to get its games broadcasted on ESPN3. Now he “comes to Quinnipiac after serving in a similar role at the University of Hartford,” his profile says on Quinnipiacbobcats.com.

Burke is another media and video connoisseur. At Quinnipiac, she has been a Media Productions Specialist in the School of Communications and Manager of the Video Equipment Center since 2015. This came after working with NBC Connecticut and Fox 61. 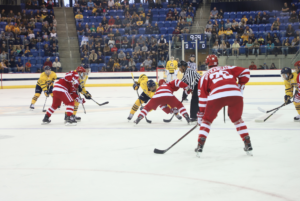 [/media-credit]“She was nominated for six Emmy’s from 2010 through 2011 and was a recipient of a 2011 Emmy Award for Continuing Coverage of Bridgeport Tornado with FoxCT,” her QuinnipiacBobcats.com profile mentioned.

Changes are being made at TD Bank Sports Center as well. Burke and MacLellan have been operating through a makeshift control room, stationed in press row of the hockey arena’s press box, while control rooms are being refurbished for ESPN.

The partnership between Quinnipiac and ESPN3 dates back to 2014 when seven Bobcat home games were featured on the website. The games featured at that time included men’s and women’s basketball as well as men’s ice hockey.

“Quinnipiac and ESPN3 will continue to work towards streaming all of Quinnipiac’s men’s and women’s ice hockey and basketball games at the Bobcats’ home venues,” via a press release from the 2014 agreement on MAACSports.com.

All signs point to an agreement being announced by Quinnipiac Athletics in the coming days or weeks.

Both of Quinnipiac men’s ice hockey’s first games of the season and women’s hockey’s tilt against Providence were aired on ESPN3.

Additionally, as of Oct. 9, all home games listed on the men’s and women’s ice hockey and basketball schedules on QuinnipiacBobcats.com are listed to be shown on ESPN3.

The Quinnipiac Athletics department declined to comment on the matter.

The Chronicle will follow updates on the story as news rolls in.