Cudi and his demons 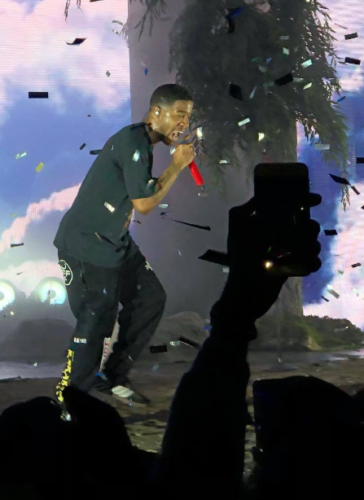 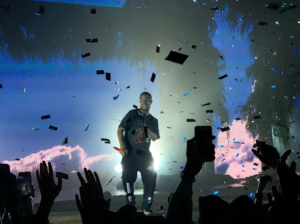 [/media-credit]The stage-propped pine trees began to emerge from the dark haze and a soft red glow shined through the wooded mirage. From the artificial trees there seemed to be a soft buzzing of crickets which began to fill the stirring theatre. Suddenly, out of the mist, Kid Cudi appeared, clad in comfortable black sweats and a beaming grin.

The theater then filled with the spacey vibes of “Baptized in Fire,” a feature off of Cudi’s most recent album, “Passion, Pain, & Demon Slayin’.” The crowd immediately began to sway with the loud bass tones while cheering on their hero.

On Tuesday Oct. 3, Kid Cudi performed at the Oakdale Theatre in Wallingford. Although the theatre was nowhere close to full capacity, the small crowd was not lacking in enthusiasm.

Quinnipiac junior Vincent Guarino was in the general admissions pit, up close and personal with Cudi.

“There was an insane amount of open seats and the (general admission) didn’t feel like it was sold out, but that made things better because we weren’t dealing with fake fans,” Guarino said. “Everyone in that crowd [that] night were genuine fans of Cudi. Everyone was singing along to everything. When he would play some of the deeper cuts from his albums, we were all going crazy. Cudi seemed really into it, too.”

Perhaps more special than the concert itself was the timing of the event. The concert came just one day shy of a year since Cudi announced his checking into rehab due to a personal health battle.

On Oct. 4, 2016, Cudi went on Facebook and released this message to his fans.

“Yesterday I checked myself into rehab for depression and suicidal urges. I am not at peace. I haven’t been since you’ve known me,” Cudi said. “If I didn’t come here, I would’ve done something to myself. My anxiety and depression have ruled my life for as long as I can remember … I don’t trust anyone because of it and I’m tired of being held back in my life. I deserve to have peace. I deserve to be happy and smiling. … I really am sorry. I’ll be back, stronger, better. Reborn.”

A year later the comeback kid, Cudi, took the stage at Oakdale and put on a 17-song set to an ecstatic crowd. The performance was pure positivity. Cudi pulled out all the show stoppers as the crowd responded more and more to his contagious energy.

Guarino, a big fan, was glad to see Cudi back at it.

“It was great to see him on stage with a huge smile on his face and just happy to be back with his fans,” he said. 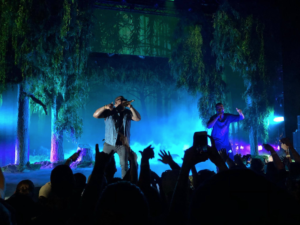 [/media-credit]The setlist weaved in and out of his early works and all the way through to “Passion, Pain, & Demon Slayin’,” released right after his checking into rehab. Cudi performed cult favorites and singalongs like “Pursuit of Happiness,” “Marijuana,” and “Mr. Rager.” New jams, “Kitchen,” “Rose Golden” and Kanye West collaboration “Father Stretch My Hands Pt. 1” contrasted the old hits. Even a few club hits turned the theatre into a rave for a few crazed minutes when “Memories” and the sirens of the Crookers remix of his breakout single from 2009, “Day N’ Nite,” rang out.

One of the highlights of the night came in the form of a surprise guest on the sixth song. Long-time Cudi collaborator and fellow Cleveland native, Chip tha Ripper (King Chip), came on stage. Together the two rappers hyped the audience up with “Brothers” and “Just What I Am,” both popular songs from Cudi’s 2013 record, “Indicud.”

Guarino was just as astonished as the rest of the crowd when Chip materialized to the mesmerizing stage.

“[Cudi] bringing out King Chip for ‘Just What I Am’ was definitely a highlight because of how random it was. I’m from New York so guests showing up at shows is normal but Wallingford, Connecticut? That’s wild,” Guarino said. “[Why] was King Chip in Connecticut? I have no idea. But wow, their chemistry together is still electric.”

As the night went on, the crowd and Cudi bonded over all the love and support in the air (not to mention weed). Cudi even stopped multiple times in between songs to sign CDs and other mementos from the GA crowd.

When the set was nearly over Cudi went on a spirited monologue to his dear fans.

“When I checked into rehab a year ago, the first thing I had to do is take care of myself,” Cudi said to the reverent crowd. “[But now] seeing the love, feeling the love, I’m so happy. I’m going to do better, I promise you that, for my family, myself, and my fans … We’re all in it together,” Cudi said. “Ever since I walked into the building, the energy has been outrageous, thank you all so much… You know we all go through shit, but we can handle it, and we survive.”

The moment was received by many cheers of, “WE LOVE YOU CUDI!” from the crowd which then rose into a crescendo of a thousand cries of joy as the opening hymns of Pursuit of Happiness begun.

It’s no coincidence that “Pursuit of Happiness” has been Cudi’s most-streamed song on Spotify with 178 million plays, as it intimately walks listeners through Cudi’s struggle between his highs and lows. 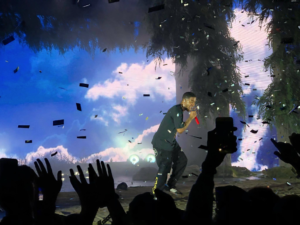 [/media-credit]“My favorite moment of the concert was when he played ‘Pursuit of Happiness’ because it was one of my favorite songs that he wrote,” Quinnipiac junior Zach Leichter said.

The chorus of “Pursuit of Happiness” sings, “I’m on the pursuit of happiness, and I know/ Everything that shine ain’t always gonna be gold/ Hey I’ll be fine once I get it/ I’ll be good.”

In an interview on Arsenio Hall’s show in 2014, Cudi expressed the purpose the behind the music he makes.

“Really, my mission statement since day one, and I’m getting so worked up talking about this,” Cudi said. “All I wanted to do was help kids not feel alone and stop kids from committing suicide.”

At the end of the day, Cudi’s show at Oakdale Theatre was uplifting. His fans were steadfast all along and made for an incredibly intimate concert.

“When you see someone you look up to in need of help, and the media is just watching and waiting for the worst possible case scenario to happen, it really hurts,” Guarino said. “Cudi needed the help and the fact that he admitted it to the world was brave and inspiring. It was so good to see Cudi on stage last night smiling. So so good.”