The building blocks of identity 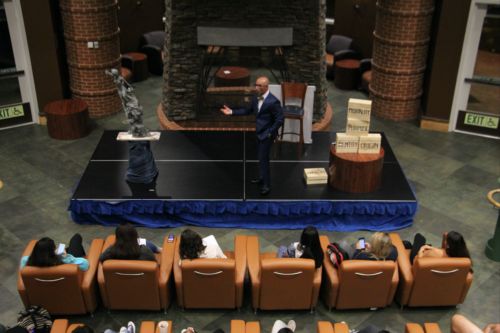 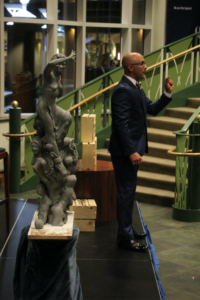 “Is it worth it to gain everything, but lose yourself?”

Dr. Ivan Tirado has been a freshmen year seminar (FYS) professor at Quinnipiac University for the past three years. He only recently became a professor because he wants to influence people to find their path early on and not be afraid to explore outside their comfort zone.

Tirado held a lecture this past Wednesday night called, “Belonging and Becoming” as a part of Latinx Heritage Month.

Starting off the lecture with a comedic tale of his high school days, Tirado explained his first encounter with a loss of identity when he realized no one at his old high school knew who he was after graduation. To further enhance the points he made, he used wooden blocks to represent the milestones that brought him to where he is today.

The first block stood for origin. He wants people to understand where they are from, but not just place themselves in that sole category. He mentions labels and how we are all human so we shouldn’t be judged for our past experiences.

“Sometimes we get so caught up with the labels that we forget that we are human, but it is very important for us to understand that, yes, you need, as a human being, to belong,” Tirado said.

Many of Tirado’s students came to see him, as he is a very well known and respected professor, they wanted to see what he would say in his lecture.

“He has a certain persona that allows others to instantly feel comfortable and adjusts quickly,” said Ilana Sherman, one of Tirado’s students. “ His light-hearted humor and ability to connect with others is a quality that sets him apart from the rest. He truly has a passion for what he teachers, and it is reflected in his class discussions, individual talks with students, and his on-campus presentations.”

He then brought out a second block with the word “identity” printed across. In connection to our family lines with our last names, we are also defined by numbers, according to Tirado. By that, he means numbers on our driver licenses or our student ID, but we shouldn’t let that number define who we are. 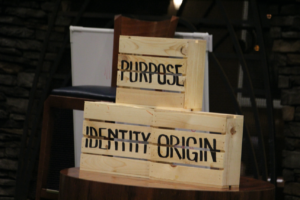 [/media-credit]“The numbers are just a small part of our identity, interesting how we have all these IDs and sometimes we don’t know who we are,” he said.

Tirado went on to explain the Social Learning Theory. He used the acronym CAPS, which stands for Cognitive, Affective, Physical and Spiritual, to simplify the theory for the audience. He pointed out the social cycle in which we are influenced by our environment, which in turn influences our behavior.

“Whatever you do in your life, you must have purpose,” he said.

Tirado placed the third block down that has the word purpose. He started this topic off with a story of how he originally envisioned his future. He sought out to be a civil engineer because he had good grades and it was an interesting field where he would be successful.

When Tirado told his father his plans, his father knew it wasn’t the right path for him. His father was proven right when Tirado changed his career goal to art. He used this excerpt from his life to explain how we must find our passion, or else whatever we end up achieving in life will be worthless if we don’t truly enjoy it.

To remind himself of his purpose, Tirado keeps notes from his daughter that she wrote when she was young in his pocket. She wrote letters describing how much she loves her father for taking care of her and providing everything she needs. Tirado says that when he sees his kids pursuing what they’re passionate about, he’s filled with joy. He wants his own kids and his students to find their purpose in life sooner than later. A regret of Tirado’s was waiting so long to go back to school for teaching and he doesn’t want anyone to have the same fear of stepping outside their comfort zone.

His fourth wooden block had the word morality written on it. The importance of morality, according to Tirado, is patience. While he was lecturing, a beautiful sculpture was to his right. This sculpture, called “Morning Light,” was made within a span of two months. 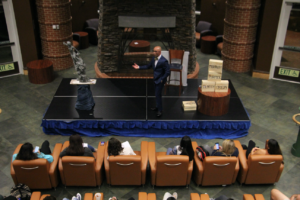 [/media-credit]“This is really 5-10 percent talent and 90 percent patience,” he said.

The fifth and final block was destiny.

“It is my hope that you understand where you’re from, who you are, what your purpose is, and how are you going to interact with that environment that is trying to influence you?” Tirado said.

Tirado makes the point that everything in life is uncertain. People are the makers of their own future and anyone can become anything they achieve to be. Tirado is proof that you can become anything you want to be life; he has maintained several jobs throughout his career from Radio Announcer to Television to Stand-Up Comedy to becoming a Manager at an OBGYN practice, before he ever thought about being a professor. He’s saying in the process of finding your destiny, do not lose yourself along with it.

“The truth is, this is a part of the journey, so it is my hope that you start shaping your own,” he said.