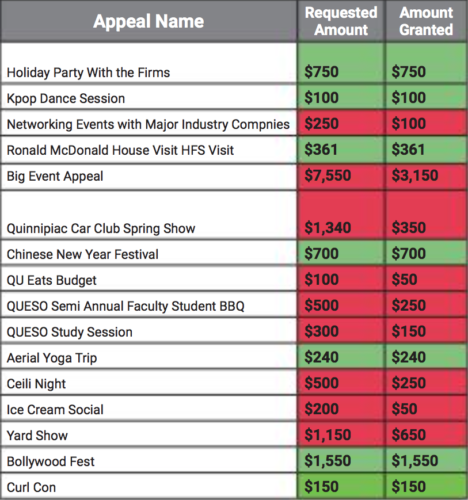 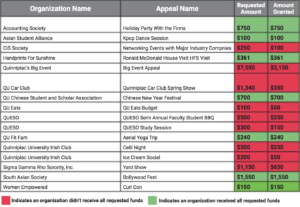 [/media-credit]Certain organizations at Quinnipiac were denied the funding they requested for school events last spring in 2017. The special appeals process by the Student Government Association (SGA) gave these clubs a second chance for financial support.

Before November 2017, SGA is required to decide which of the 33 organizations that applied will receive funding.

Unfortunately, SGA was not able to provide extra funding for off-campus events, such as conferences, competitions and capital expenditures.

SGA has done its best to provide Quinnipiac organizations with as much funding as possible.

“It is unfortunate that we are at a point right now where SGA doesn’t have the ability to fund all organizations,” Hicks said. “We can only do as much with what money we are given.”

SGA’s goal is to benefit as many students as possible, but it has been a challenge due to the lack of funding from the University.

To apply for special appeals, an organization needs to submit the appeal through DoYouQU and attend a meeting with the Finance Committee of SGA. Many of the organizations agreed the process was made simple and reasonable.

“The written portion was pretty straightforward,” Breanna Hegarty-Thorne, junior public relations officer for the Quinnipiac University Irish Club, said. “During the face-to-face interview, they were all extremely friendly and efficient.”

Organizations are allowed to submit up to two appeals. The process of deciding which appeals will be heard begins as soon as one is requested.

On-campus events that are open to the entire Quinnipiac community appeals are held first, followed by off-campus events. Once separated into off and on-campus categories, the decision is then based on the order in which the appeals were received. SGA is quick to respond to all appeals.

“I was overall pleased with the quick turn around time of special appeals,” Dhara Bhuptani, senior and president of the South Asian Society, said.

Not all organizations with appeals heard received the full amount they requested, though most of the organizations that received any amount of funding from SGA have expressed their gratitude.

“Thanks to them we are able to hold an event to promote the Irish culture in the QU community, which we are extremely grateful for” Hegarty-Thorne said. The special appeals process has allowed clubs a second chance to fund events that could benefit many people at Quinnipiac.

“I’m super excited that we have the funds to plan our biggest annual event of the year, which is the Bollywood Fest,” Bhuptani said.

Although many appeals were not able to be heard, SGA was still able to help some organizations with funding.