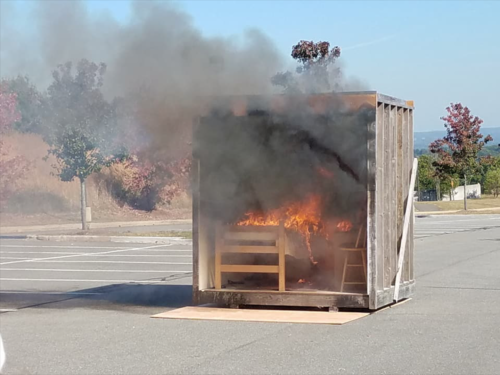 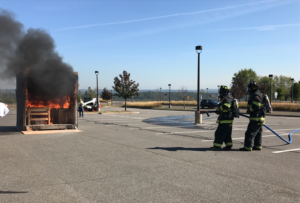 [/media-credit]Fire safety is important for students to understand, especially living in a dorm at college.

A mock fire was displayed on York Hill Campus on Wednesday, Oct. 4. The Hamden Fire Department, Public Safety and Residential Life put the event together for the purpose of teaching students fire safety.

“The safety of students is a top priority, and we want to be sure the residents of our halls are aware of the dangers related to fire,” Director of Residential Life Mark DeVilbiss said.

On Saturday, Sept. 16, a kitchen fire took place in the Crescent residence hall on York Hill Campus. The fire reportedly to have started from a student cooking with oil which caught fire on the stove top. No one was harmed in the incident.

“This event really shows the students what a fire can do to a dorm room,” Hamden Fire Marshal Brian Dolan said. “It also teaches them how much time they actually have once a fire has started.”

The mock fire was put on display to show students how fast a fire can spread, and what to do if they were to find themselves in that situation.

“We can’t prevent a fire, but we can hope that this event shows students how to act in case of one,” Deputy Fire Marshal Tim Lunn said. “We’re here to teach students about fires and how to make their rooms safer so this doesn’t happen in the future.”

This was the fourth time Quinnipiac has sponsored mock fire by the Hamden Fire Department.

The event started by a Hamden Department firefighter demonstrating how to properly use a fire extinguisher. Firefighters showed students how to properly put out a fire with the pull, aim, squeeze and sweep method.

A firefighter then set the dorm on fire. The dorm consisted of a bed, desk and other items to represent a typical student’s room. The fire proceeded behind the desk and made its way up to the wall.

According to Hamden Fire Department, fires burn in a “V” form from the point of origin. It starts from the center and makes its way up the walls.

The smoke detector went off immediately even though no one could see a trace of a fire. The firefighters told students that every fire is different. In this case, the wind affected the fire and caused it to form slower than it would in an actual building.

Within minutes of the flames appearing, the smoke changed to a thick, black color. The firefighters explained that this occurs because of combustion and the smoke becomes toxic to breathe. 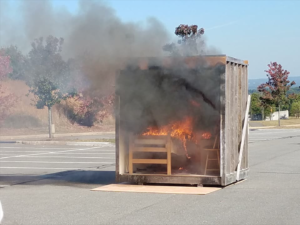 [/media-credit]As the smoke filled the dorm, it did not reach the bottom of the floor and under the bed. The firefighters pointed this out to the students and the importance of staying low to the ground to avoid breathing in the toxic air. The fire reached approximately 800-1,000 degrees Fahrenheit.

The firefighters put on their bunker gear and readied the hose from the fire truck. They stood approximately 10 feet away from the fire and put it out. Minutes later, the fire was out and students observed the damaged room.

The entire dorm was stained black from the flames. Pieces of furniture and the wall chipped off, indicating the aftermath of the fire. Students were in shock of how much damage was done in such a short amount of time.

“It’s one of those things where you don’t think it could ever happen to you, but it’s so simple,” freshman public relations major Annika Gustafsson said.

Fire safety is important to teach students, according to the Hamden Fire Department. Dorm fires are common if students are not educated properly on how to prevent them.

Junior biology major Emilio Zullo had a fire in his building last year.

“I think this is a great event to teach students what to do in case they are ever stuck in that situation because you never know if it can happen to you,” Zullo said.