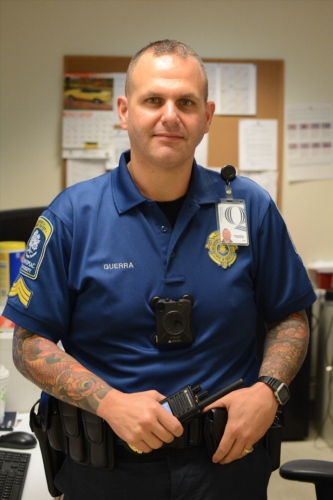 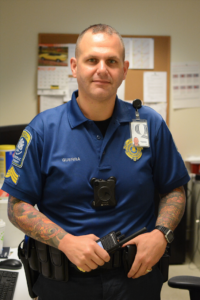 [/media-credit]With the addition of guns to arm officers in 2014, Quinnipiac University’s Public Safety added body cameras to its arsenal of advancements.

Put into use in late August 2017 after Public Safety was trained and certified, the small, versatile cameras are meant to protect officers and students alike by providing visual proof of incidents, according to Public Safety Officer Bradley Bopp.

At the beginning of every shift, officers are assigned a camera, according to Bopp. The officer puts it on, turns it on and goes to his or her shift. At the end of the shift, the officer returns it, then video is uploaded into cloud-based storage.

Following in the footsteps of schools nationwide such as Fairfield University, Syracuse University, University of Hartford, Rowan University and Ithaca College, Quinnipiac made the executive decision to implement cameras into its daily routines to keep up with the ever-changing evolution of law enforcement.

“It’s kind of the way law enforcement is going,” Bopp said. “You’re seeing them in a lot of police departments and there are several other universities that are using them as well, so it’s something we’ve been looking into. It’s obviously a cost factor.”

Although the specific cost of the body cameras along with their charging and saving units was not identified, the cost for other schools such as Syracuse University came to $1,000 a piece, according to an article by WRVO Public Media.

“The cameras are inexpensive compared to the cloud,” Bopp said. “A lot of departments worry because it’s expensive to be able to maintain that.”

For students such as sophomore marketing major Amanda Barbato, the pricey devices seem unnecessary in comparison to providing funds for other departments and organizations on campus.

“I feel that the body cameras are a waste of money because I do not see many incidents that would happen on campus where they would be needed,” Barbato said. “Our campus is a pretty safe environment, so I don’t see them being necessary.”

In other words, the small device works as a camera to record everything officers see throughout their daily shift.

“There’s reasons we have in our policy (to turn on the camera) and some of those are when responding to a call reportedly involving weapons or violence, responding to any call involving a physical altercation, arguement or disturbance, any call where officers are needed to resolve or prevent a dispute and it goes on and on,” Bopp said.

Some other situations that will be recorded are drug investigations, subsequent room searches and taking statements from witnesses or victims.

Video footage involving a criminal case or civil complaint will be saved in the cloud for up to four years, while any other recorded information will be erased after 90 days.

For the 50 officers that are currently trained and wearing cameras, tapings of events on and off campus provide visual clarification to the ‘he said, she said’ scenarios that may have occurred in the past. The footage, upon review, can also supply officers with objects, people or actions they might have missed upon first glance.

“It’ll help if we go off campus to a party or to a house, we’d be able to see plates on cars, stickers on the cars, people’s faces,” Bopp said. “It’s a good investigative tool to have. Something caught on this that the naked eye didn’t see could be very evidentiary to some kind of case.”

In regards to protecting the safety of officers, the cameras can also be used in defense of students if a safety officer’s actions proved unjust in the eyes of a student or faculty member.

Junior health science major Sara Karr respects Public Safety for maintaining these advancements to ensure students safety, but still feels that having the power to record people whenever and without their consent can lead to potential privacy issues.

“I think it’s a good thought initially to protect students that may be taken advantage of by the authority of Public Safety,” Karr said. “But I feel like it’s something that could be abused even if officers can’t necessarily edit the video.”

Public Safety has been utilizing the body cameras since before students returned to Quinnipiac for the fall semester, yet not many are aware of the change in uniform and what that may mean for those who are not always conscious of their actions.

Bopp hopes that the cameras will curtail some of the conduct issues.

The cameras clear the air of any questions that may revolve around instances that come up on either end of the issue.

“I think it’s good all around. It’s good for the student as well as us and it keeps everybody honest,” Bopp said. “It keeps the public safety officer honest in doing his job and not trying to be anything more than he is above the law.”