No. 14 Quinnipiac men’s ice hockey loses 3-2 in final seconds to No. 2 Boston University 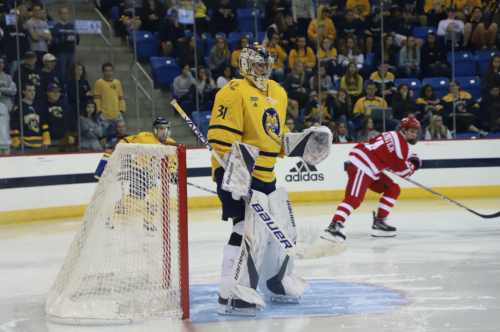 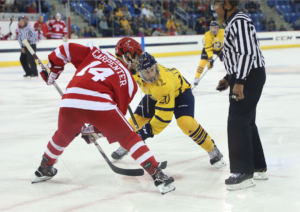 [/media-credit]“I thought [Boston University] played hard today,” Quinnipiac head coach Rand Pecknold said. “I thought our guys did too. Certainly we’re disappointed to lose in overtime like that. I thought our guys competed hard and battled. It’s early in the season there’s some things we need to clean up but there’s a lot of positives.”

Terriers freshman Shane Bowers (Ottawa’s 2017 first-round pick) scored the game winning goal with 41 seconds left in overtime. Bowers’ goal was an awkward one, as his first shot was saved. He then got the rebound with chaos in front of the net and was able to sneak the puck into the net as it was dislodged moments after it went in. Although the goal was under review, the call was upheld, securing Boston University’s win.

“It’s just a great win for us. Really proud of our team,” Boston University head coach David Quinn said. “This is a team that certainly tests your physicality and your toughness. I was curious to see how we were going to react coming into a hostile environment against big, mature, strong team that I know has a lot of talent and is well-coached. I’m really proud of the way we responded.”

The Bobcats were without junior defenseman captain Chase Priskie (Washington’s 2016 seventh-round pick) on Sunday as he’s recovering from an injury sustained in Friday’s contest at Boston College. Priskie was replaced by sophomore Brogan Rafferty on the first defensive pairing.

Although Rafferty didn’t show up on the score sheet, Pecknold was impressed with his performance.

Sunday marked the first official collegiate game for Bobcats freshman goalie and Detroit Red Wings draft pick Keith Petruzzelli. The 6-foot 5-inch netminder finished the afternoon with 31 saves and he knows what he has to do moving forward to secure the starting job over sophomore goalie Andrew Shortridge, who started in Friday’s season opener on the road. 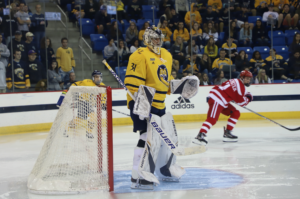 [/media-credit]“I was happy with how [today] went,” Petruzzelli said. “Obviously a tough loss, not the outcome we’re looking for, but the guys did a great job in front of me pushing shots to the outside [and] blocking shots. It was a fun for sure and I’m looking to get back out next weekend.”

Quinnipiac sophomore forward Alex Whelan got the game’s first goal, and his second of the season, nearly 14 minutes into the contest.

The goal was set up by junior forward Craig Martin blocking a Terriers entry pass at the Bobcats blue line. Whelan gathered the puck in the neutral zone, skated into the attacking zone and shot the puck from the right faceoff circle, over the blocker side of Oettinger.

“I’ve been working a lot on placing my shots rather than just turning around and just shooting it,” Whelan said. “This year I’ve been working with Craig (Martin) and Scott Davidson so far. They’ve been really good. If [Martin] doesn’t block that shot, I never get the chance to take that shot so I think that’s a great play by him.” 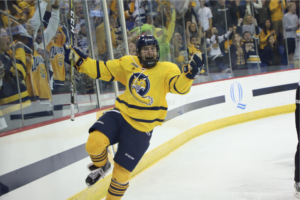 [/media-credit]After going 20-5-1 in the 26 games they scored first last season, Sunday marked the second time in as many games that the Bobcats weren’t able to win after scoring the game’s first goal.

Terriers sophomore Patrick Harper (Nashville’s 2016 fifth-round pick) scored his first of two goals on the day at 3:39 into the second period, on a 4-on-3 power play. Petruzzelli made the initial save on Harper’s first try, but as the goalie was outstretched, Harper gathered the rebound and put it into the net.

Nearly 10 minutes later, the Bobcats took the lead back when freshman center Odeen Tufto won a puck battle along the boards. Tufto then gave the puck to senior forward Landon Smith who passed the puck back to senior forward Bo Pieper at the blue line. Pieper skated a few feet forward and unleashed a wrist shot from the slot that went by the glove-side of Oettinger.

Harper earned his second goal of the game, and his fourth of the season, just 53 seconds into the third period. Harper carried the puck into the attacking zone, skated around a Bobcat and shot the puck from the left circle. A ricochet off a Bobcat defender helped the puck glide into the back of the net.

Harper now leads the nation in goals (4) and points (6) after Sunday’s game.

With Sunday’s loss and Friday’s tie at Boston College, this marks the first time that the Bobcats failed to win either of its first two games since the 2014-15 season.

But Pecknold has some optimism about his team moving forward.

“I’m not a big moral victory guy, but I do like the way we played this weekend,” Pecknold said. “We definitely made mistakes in both games, which you expect early on, but I thought our battle level was really good. I thought we played to our identity. It wasn’t perfect, we’ve got to get some of these freshman more up to speed and some of these freshmen are good hockey players…they’re going to help us win games. We just need a few more weeks of practice and a few more games and they’ll help us.” 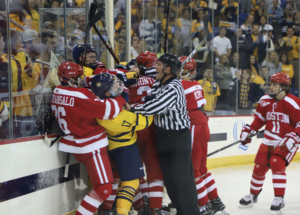 [/media-credit]Between the Terriers and Eagles, the Bobcats faced 19 NHL draft picks (11 for the Terriers and eight for the Eagles) over the course of the weekend. The Bobcats only have three themselves in Priskie, Petruzzelli and junior defenseman Karlis Cuktse (San Jose’s 2015 fifth-round pick).

All six of the defenseman that played for the Terriers today are NHL draft picks.

The Bobcats next play on Saturday afternoon, when they host the University of Vermont. The last time the two teams faced, the Bobcats lost 5-1 in the Friendship Four final.