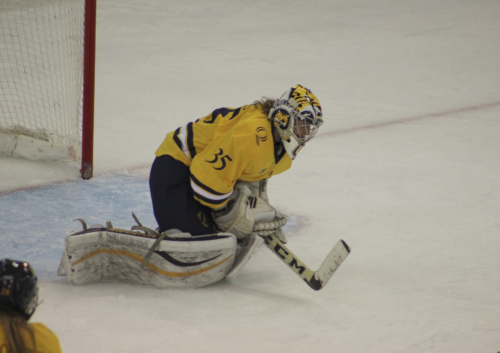 The Quinnipiac women’s ice hockey team beat Providence in its home opener by a score of 1-0 on Saturday, Oct. 7. While the Bobcats lost 3-1 on Firday at Schneider Arena in Providence, they were able to shut down a team who has proven to utilize a very potent offense so far in this young season (5.33 goals per game).

The two Abby’s were the heroes of today’s contest, as sophomore goalie Abby Ives posted a 37-save shutout in the win (on her birthday) and sophomore forward Abby Cleary scored the lone goal, while also playing hard on both ends of the ice. 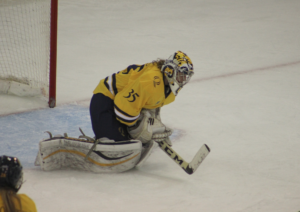 [/media-credit]Quinnipiac head coach Cass Turner has been very impressed with Cleary’s work ethic throughout the offseason and is not surprised that the young forward has found success so far this season.

“Abby Cleary’s mindset has really grown,” Turner said. “When she has successes and when she has failures, she is ready to recover from them. That is a really important skill in college hockey and it’s showing.”

Cleary scored the goal in the middle of the second period, but before that, it was Providence who was in control for much of the game.

The Friars spread out all over the ice and really moved the puck effectively throughout the first half of this non-conference battle. Quinnipiac struggled getting the puck out of the zone as Providence’s forwards presented speed that was difficult for the Bobcats to match.

Quinnipiac was outshot 14-5 at the end of the first period, but Ives came up with some key saves to keep the game even.

Quinnipiac’s struggles transferred into the beginning of the second period, as Providence continued to press and had a couple of opportunities right at the start of the period, including a 2-on-1 chance that was denied by Ives.

“We needed to care about every play we were gonna make, we needed to value our sticks, we needed to be in quick support of one another,” Turner said of the team’s adjustment after a subpar first period. ”It was huge to get that first goal today and you could see us transform, so I think for us, we just need to play from a more confident place where we are believing in who we are.”

Quinnipiac went on the power play midway through the second period and while they were unable to bury a goal on the man-advantage, there was a clear momentum shift after this sequence.

Shortly after the power play ended, Quinnipiac got on the board.

Senior forward Raquel Pennoyer took a shot from the blue line which created a rebound and Cleary came whizzing into the zone, squeaking by the two providence defensemen and burying the rebound chance with a backhand that she put upstairs.

“Rocky had a really good shot on goal, and rebound came right to me so I was lucky enough to put that one in,” Cleary said.

Quinnipiac was greatly energized from the power play until the end of the second period, having a stretch where it had 11 shots in a row before Providence was able to get one. 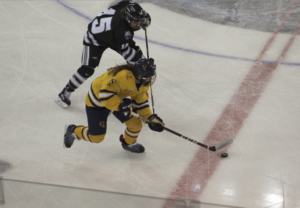 [/media-credit]The third period was back-and-forth throughout most of it and the team defense to go along with Ives’s stellar performance enabled Quinnipiac to prevail over this tough Hockey East opponent.

The trio of Taylor House, Melissa Samoskevich, and Sarah-Eve-Coutu-Godbout came up big during the final stretch and held possession in the offensive zone for most of the time that they were out there.

The Bobcats’ overall team defense was on full display in the third period, with multiple players dropping to their knees to block shots and clear the puck out of the zone.

Quinnipiac hopes to build on this great team effort, as it gets ready for a double header against Vermont at home next weekend, Oct. 14-15.