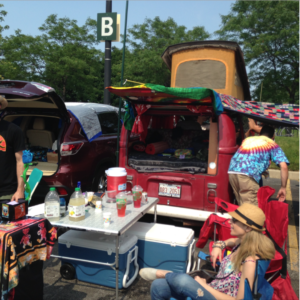 [/media-credit]As some QU students may or may not have noticed, a signature party has been left out of the Quinnipiac social scene for some time now. Tailgating is a party tradition that many, if not most, colleges and universities partake in no matter what the season or sport. Granted, we don’t have a football team, but we do have a D-1 men’s ice hockey team that has carried our school name into the world’s eyes as we dominate the ice.

With games always being filled and students always repping the hockey teams, it almost seems wrong that we don’t celebrate and pump up before the games with a collective and unifying tailgate. However, even if the student body came together to try and create one, tailgating isn’t even allowed by QU rules. In the 2018 Quinnipiac University Student Handbook it states: “Open parties or gatherings, meaning those with unrestricted access by non-members of the student organization, without specific invitation, where alcohol is present, are prohibited.”

“I had no idea [that tailgating was against school policy],” junior Conor McCabe said. “Nobody has ever said anything so I guess I just always assumed that it was something kids at this school weren’t into- there’s so many rules.”

McCabe is not alone in his realization that tailgating wasn’t allowed on campus. Junior Julia LeBlanc shared the same awakening.

“I did not know that tailgating wasn’t allowed at Quinnipiac,” LeBlanc said. “I think it’s the best part of the game, just celebrating beforehand.”

But because of this policy, Quinnipiac is missing out on some of the most legendary tailgates before the games. York Hill is one of the most perfect places for a tailgate out there. The three empty lots beside the Quinnipiac Sports Center provide ample space to set out tents, grills and coolers galore.

What makes the location even better is the view it provides. Being up on the hill gives a stunning panoramic view of the Sleeping Giant and a far-away look at the New Haven skyline- so when you want to take a celebration picture with your friends you have the best background to match.

Also, for the girls who like to get crafty, shirts and apparel with college logos have been revamped to fit the tailgate scene. Not unlike many shirts that have been D.I.Y’d on this campus, shirts among other colleges made for tailgates are fashionable tube tops, lace up tops and cropped sweaters that show creativity while still promoting the beloved school.

York Hill is also a wet campus, which is a plus for students 21 and older. So in addition to playing some chart-topping songs while playing cornhole, students can also play some drinking games to liven up their tailgate experience without worrying about consequences from Public Safety.

In addition to all this, transportation to and from the sports arena is free and reliable thanks to the shuttles. For students that live on York, their commute is easy enough with the arena being walking distance from their dorm rooms. But for students living on main campus, one five-minute shuttle ride up the hill and the destination has been reached. So getting to and from this hypothetical tailgate would be safe, easy and very, very cheap.

Sophomore Rachel Marchuk understands the importance of safety when considering the possibility of tailgating before games.

“I think that tailgating is something we should try and reinstate as long as people stay safe and follow the rules set out for them,” Marchuk said.

With the first hockey game approaching this weekend and tickets selling out almost instantly, the urge to tailgate is growing.

“I would absolutely be open to go to one.” LeBlanc said. “I’m actually going to UConn for their tailgate this weekend.”

Maybe if we are able to somehow change the policy to unite the student body in their passion for the sports teams, we can have our school be the one visited before the big game.