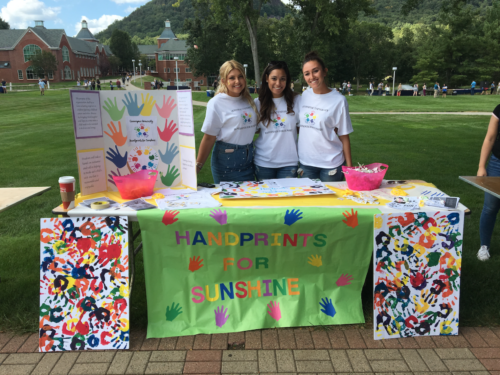 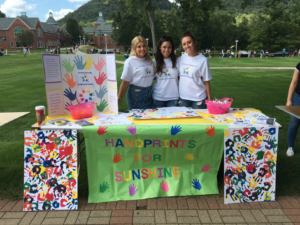 [/media-credit]Bringing an organization to any university is difficult for founding members. The endless paperwork and appeals can drive any full-time student insane, yet sophomore Gabriella Izzo and senior Emily Grindell took on the ultimate challenge last year in creating their very own club.

Childhood friends, Izzo and Grindell came together in college to create what is now Handprints for Sunshine.

The purpose of the organization is to leave a lasting imprint on those fighting childhood cancer and other illnesses by bringing them laughter and hope through visits to children’s hospitals and social service institutions, according to the Facebook page.

While developing the club, the president and founder, Izzo, stressed the need for the organization to be broader than its previous versions and therefore created the concept from scratch, starting with the name.

“I brainstormed ideas and thought about how holding a child’s hand is probably one of the most comforting and rewarding feelings and immediately thought of handprints,” Izzo said. “I finally decided that when a child looks up at you and smiles, it brings out almost an inner sunshine so I put it together and got Handprints for Sunshine.”

Based on similar concepts existing at other universities, the club is in its first year at Quinnipiac and already has plans to make its imprint on students and residents of the Hamden area.

Collecting a high of 900 signups from the Involvement Fair, and a turnout of 150-200 students in attendance at meetings, the organization has already put in the making precautionary steps for the members to ensure overall safety of volunteers and the children and families they visit.

“We had a meeting this past week that went over HIPPA (Health Insurance Portability and Accountability Act) training, which is all the laws having to do with confidentiality of all these patients because that’s very important within our organization so we take it very seriously,” Grindell said. “Then we took a small quiz that counted as our certification so we’re technically all certified under HIPAA.”

Despite still being the early stages of the organization, the executive board has already established connections with local schools, the New Haven Ronald McDonald House and Yale University. Trips are expected to be planned at a minimum of three a month to visit each of these locations either dressed in character costumes or equipped with activities to entertain patients.

“The people at the Ronald McDonald House are really welcoming us with open arms, they really want us to be there a lot,” Grindell said. “They love the idea of the organization so we’re gonna be there as much as we possibly can.”

Through Grindell’s personal connections as a long time resident of Hamden, Handprints also maintains a program with Yale in which participants can be certified as one-on-one volunteers to receive service hours under Yale as well as through Quinnipiac.

“Some of our volunteers are being certified through Yale to do the one-on-one visits so that’s like bedside and taking the kids from their treatment back to their room, hanging out with them for a while… things like that,” Grindell said. “My grandmother was the head of nursing education so that was a huge influence getting involved with them.”

Since the club is currently unchartered by the school, the organization has utilized the resources of their members to fund trips such as the ones into New Haven along with the supplies needed for crafts and costumes.

“Some of it is coming out of pocket,” Grindell said. “Some people that are part of the organization have parents who work for Hasbro and things like that so they’ve been trying to get donations for us. There’s things like tax write offs that some of these companies have been doing for us and donating certain things which has been really really helpful.”

Handprints has also been selling t-shirts with the organizations logo while also supporting donations from a GoFundMe page. The page has a goal of $10,000 and has already raised $315 in the past month.

Grindell and Izzo both emphasized the value Handprints holds in its universality and the importance the specific cause has to its members.

“Most of our E-board has a lot of volunteer hours previous to this, especially with special education,” Grindell said. “A lot of us are into teaching and things like that so most of us are children oriented people. There’s an opportunity for everyone that joins the club since we have the different committees there’s a chance for everybody to find something that they are interested in.”

For sophomore entry-level masters physician’s assistant major Rebecca Gotthelf, the organization stood out amongst the numerous others on campus because of the interactive environment the club plans to engage in.

“There’s a lot of philanthropic things on campus, but this is unique in that you do get the hands on experience with kids in a fun environment, not just for them, but for you as well,” Gotthelf said.

Already growing quickly in numbers, Handprints has ambitious plans to one day expand into regions farther than Hamden and New Haven into a potential partnership with Connecticut Children’s Medical Hospital and possibly neighboring cities and states.

“I definitely think that once we grow a lot more that it will be really easy for us to expand, especially since we’ve been getting more and more recognized and more people are hearing about us,” Grindell said. “We had way more of a turnout than we’d ever expected so it’s really awesome that we get to get so many people involved.”