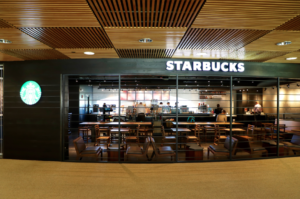 [/media-credit]Quinnipiac students can now look forward to grabbing a piping hot latte between classes or relax and enjoy a snack with friends at the brand new Starbucks upstairs in the Carl Hansen Student Center Piazza.

The fully-functional Starbucks had a “soft open” on Tuesday, Oct. 3, and is serving the company’s entire menu including coffee, specialty drinks, sandwiches and grab-n-go snacks.

Charles Couture, Quinnipiac’s resident district manager of dining services, explained that the opening of Starbucks on campus is part of Quinnipiac’s overarching goal to make improvements according to student feedback.

“The Starbucks cafe has been designed to be a gathering place for students with community tables, soft seating and music,” Couture said. “Starbucks is just part of an overall plan to enhance the student experience. We have worked closely with the university to increase overall student satisfaction.”

Two students enjoying the new cafe’s opening, Maria Mastropaolo and Brandon Lyons, are excited by the new on campus dining option and thought the drinks tasted just like they do at a regular Starbucks location. 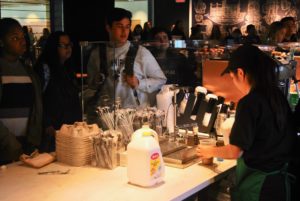 [/media-credit]“I got a pumpkin spice latte, I’m super excited. It tastes just like the real Starbucks because it is the real Starbucks, and that’s really exciting. This made my day a whole lot better,” Mastropaolo said. “[The line] was like thirty minutes but it was worth it honestly. I think it’s gonna be a really great thing. I think all the students are gonna love it.”

Lyons agrees that Starbucks is a positive addition to the university’s dining selection.

“It’s nice that the school is listening to us and giving us what we want. The wait time was a little long, but I think once they get into the swing of things, that won’t be an issue,” Lyons said.

Quinnipiac chose Starbucks to be its newest addition to dining options on campus because of how it values using quality ingredients and making its products with care, something Quinnipiac believes its student body deserves.

The university also decided on making several additions to on-campus dining this year based on survey results taken from the student body, which shows that sushi and a national coffee chain were the most desired food options to come to campus. 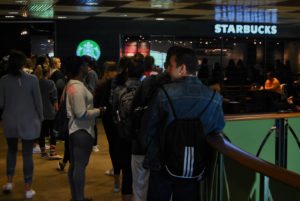 [/media-credit]Couture believes that Starbucks will be well received by the Quinnipiac community.“I believe that the students, faculty and staff are really excited about having a Starbucks on campus,” Couture said. “I expect that it will be a very busy location for us and a great option for the students.”

The design team and university staff worked hard over the summer to transform Carl Hansen Student Center (SC) Room 225 into a fast-paced coffee shop, but Couture believes it will all be worth it when the grand opening arrives.

“Converting a lecture hall into a fully operational Starbucks is not without its challenges,” Couture said. “We assembled a great team to accomplish this transformation. Starbucks will be a great addition to our dining program, so any challenges we faced to make this location a reality will be forgotten once we start serving lattes.”