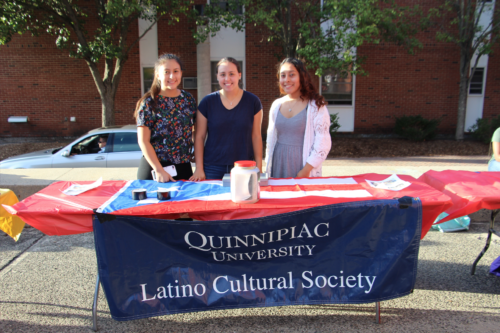 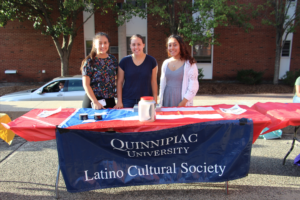 The purpose of the event was to raise cultural awareness on campus and give recognition to organizations that normally do not get much recognition, according to Destiny De Jesus, junior and president of the Beta Rho Chapter of Chi Upsilon Sigma.

“I really like that (the Cultural Carnival) bringing everyone together to enjoy some fun things,” De Jesus said.

Sophomore Patrick Cambareri believes that the best part of the event was the emphasis on diversity and the music.

Additionally, there was an area for other organizations, besides NAACP and Chi Upsilon Sigma, to table and promote themselves. Some organizations that were present include: African and Caribbean Student Union (ACSU), Black Student Union (BSU), Women Empowered and the Latino Cultural Society (LCS).

The LCS mainly dedicated its table to raise money for Puerto Rico and Mexico. Recently, these countries have been affected by the natural disasters of hurricanes and earthquakes such as the most recent Hurricane Maria.

Stephanie Martinez, junior and vice president of Latino Cultural Society, said that the organization is here to raise money for the disaster relief fund for Puerto Rico and Mexico.

“We’re doing everything that we can,” Martinez said. “We’ve been tabling in Tator Hall to try to get as many donations as possible. I know that we are throwing it out on social media, if anyone wants to donate to us.”

Martinez believes that this cause is important, especially since Puerto Rico is an American territory.

“I see that some states are sending help over,” Martinez said. “But, I feel like more people need to see that they are struggling. They literally have nothing…houses are destroyed, they have no running water, no power. I hope we can come together as the United States and help.”

The event required a $5 entry fee as proceeds went to Chi Upsilon Sigma’s philanthropy, the “I Have A Dream” Foundation.

“This foundation is centered on the academic growth of kids who cannot support themselves throughout school, such as high school and college,” De Jesus said.

The “I Have A Dream” Foundation also provides post-secondary tuition assistance, according to its website.

Although cultural awareness was the main focus of the event, political awareness was also present at the carnival and a table was dedicated for people to register to vote.

The event did not just bring awareness, it created impact. The Cultural Carnival brought people together in order to raise money for some noteworthy causes. By giving a few dollars, many Quinnipiac University students helped students achieve their academic dreams and provided relief to areas affected by natural disaster.