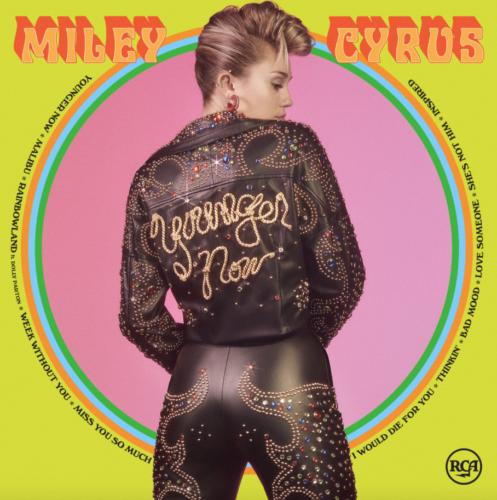 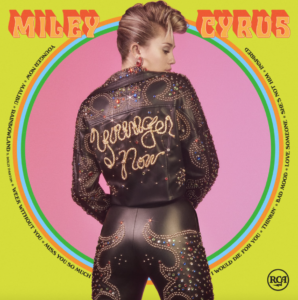 [/media-credit]“Younger Now” is the epitome of a rainbow. Just like the colors, every song is different, but when you put them together it makes something beautiful. And who doesn’t love a rainbow?

But don’t be mistaken, there’s a lot of hippy-ness going on in this album, so if you’re not open to that idea, this is not the album for you. In fact in the song “Miss You So Much,” it really sounds like she should be sitting cross-legged in a wheat field barefoot with an acoustic guitar strapped across her body as she puts the wheat into her hair and hangs with her stoned friends.

The 11-song album released on Sept. 29 ranges from songs with a 70s-vibe to pop or bluesy. It is a true telltale into ‘the real Miley.’ Listening to the songs, one can tell how raw each one is because they all are so different; she’s not trying to fit into a mold of the “pop-generation,” or create a unique album to gain attention. This album is genuine.

The single, “Younger Now,” is definitely the new anthem and motto she is living by. Cyrus shocked the world during the infamous 2013 Video Music Awards (VMAs) with her twerking and nude outfit and since then seemed to spiral into this blackhole of what should be referred to as “the lost Disney souls.”

Then came “Bangerz” and sure, there were a few bangers on that album like “Wrecking Ball” and “Adore You,” but fans felt like they lost a friend, because she just wasn’t the same.

And then there was her free independently released album on Soundcloud “Miley Cryus & her dead petz,” which we really don’t talk about…except for “Pablow the Blowfish.”

It seems like with “Younger Now,” however, she’s finally showing us her cool, mellow side and saying she doesn’t have to pretend to be anything anymore.

“No one stays the same/ You know, what goes up must come down/ Change is a thing you can count on/ I feel so much younger now,” Cyrus sings.

With a pop feel to this song and her lyrics, it is as if she’s saying that she’s letting go of all these different, fictional versions of herself to show her true side. Because of that, she feels less pressure and when do you feel the least pressure, and the most carefree? When you’re young.

Her lyrics are the most powerful part of this album.

The best songs are arguably “Thinkin’,” and “She’s Not Him,” besides of course the hit single “Malibu,” released on May 11, that graced the radios all summer long.

“Thinkin’” is edgier than all the other songs, with breathy breaks in between phrases. This is definitely a song one can blast through their car speakers because of the intriguing and driving backbeat. It’s one of those songs you sing when you’re pissed off at your significant other, but also pissed off at yourself.

“She’s Not Him,” however, is more low-key with a slower tempo and use of piano. Cyrus’s lyrics in this song are so revealing about her current and past relationship and how conflicted she felt.

After the 2013 split from her long-time boyfriend and fiancé Liam Hemsworth, she came out as pansexual and started seeing a woman, Victoria Secret model Stella Maxwell, according to Elle. This song shows, though, the strong ties that she’s always felt for Hemsworth that no one could ever replace him no matter how hard she tried to move on.

Any fan of Cyrus and Hemsworth will have all the feels in this album. One could speculate that a lot of songs are written about him like “Miss You So Much,” “I Would Die For You” and even breakup song “Week Without You.” Cyrus confirmed back when she released “Malibu” that the track was a love song for Hemsworth.

“’They’re going to talk about me if I come out of a restaurant with Liam. So why not put the power back in my relationship and say, ‘This is how I feel’?” she said in an interview with Billboard.

And Hemsworth is the biggest fan. When the album released, the actor posted on his Instagram encouraging fans to buy the new album.

“Check out this little hotties new album!” Hemsworth’s caption read. “She’s got a bright future ahead 😉 Get it while it’s hot! #YoungerNow.”

While there are amazing tracks on this album, there is one that didn’t have the same punch, and deserved so much better.

Her hippy-est and least effective song is “Rainbowland,” performed with her godmother Dolly Parton and isn’t of the same quality as the other songs. It’s not that the music isn’t catchy or the lyrics aren’t well thought out. It’s the sound quality.

In the beginning of the song plays a voice message from Parton, where she says that she’s going to record herself on a cassette tape so that Cyrus can later add her part to it. She sarcastically jokes that she’s so “high-tech.”

Because of the way she recorded her part, Parton’s singing is so overpowered by Cyrus. Of course, it is Cyrus’s album, but the song could have been much more special if you could hear Parton more clearly. Her echo of Cyrus’s lyrics and harmony are so faint, one can barely hear it. One can tell it would be of such better quality if the women’s voices blended equally.

Overall, the album is solid. Her soulful and self-discovering work is effective and powerful. The new Miley is here, and we can only hope she doesn’t go anywhere and spiral back down into the post-Disney blackhole. Recently artists such as Taylor Swift have tried to create new identities for their music, however, though taking a risk to do so, Cyrus’s album is the most honest and creates an identity that’s very unique.