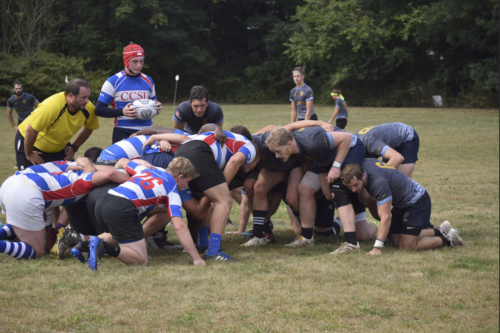 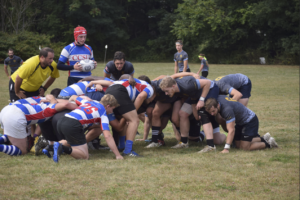 [/media-credit]Every Saturday afternoon in Hamden, a group of more than 40 Quinnipiac athletes prepare for their next contest. They have played alongside one another for years, to the point where they consider each other family. Many of them live together, even study together. This band of brothers is everything one would expect from a competitive college team.

Unfortunately, the competition and comradery is where the similarities of collegiate athletics stop. These QU students don’t play their matches at the foot of beautiful Sleeping Giant State Park. Their matches are played at the foot of an abandoned middle school on New Hall Street in Hamden.

The team doesn’t take a school shuttle to their home field. They are confined to a carpool system.

The players bleed Bobcat yellow and blue, but there is no Bobcat sported proudly on their uniforms. Quinnipiac apparel is forbidden, instead giving way to logos of sponsors that offer at least a percentage of funding to make this team a possibility. The Bobcat roar is not heard in the stands or on the sidelines. Custom chants take their place.

Welcome to a game in the life of New Blue Rugby, Quinnipiac’s unofficial men’s rugby team.

Made up entirely of Quinnipiac students, New Blue Rugby offers college students a chance to experience competitive contact sports that is hard to find on campus. There are no scholarship offers or tryouts. The only requirements for membership are a love for the game, and a devotion to the team.

“As long as you come out and put in the work, and you try to show that you want to be part of who we are, we’ll accept you,” senior and team captain Nik Griswold said. “As long as you’re a Quinnipiac student…you’re always welcome.”

Griswold’s perspective is not unique. It is a belief shared by everyone on New Blue.

“We don’t have tryouts or cuts,” co-captain Dan Holland adds. “We take whoever. If they want to play, they’ll play.”

When Holland says they’ll play, he means it.

New Blue may not be an official collegiate athletic squad or even a club team, but they carry the workload and demands of  Division I athletes.

“We practice every day from five to seven (in the afternoon),” Griswold said. “Those two hours a day don’t include working out on your own, and then it’s half a Saturday on game days. We’ll be up at nine, and won’t get back until four or five.”

For the leaders of New Blue, the physical demands of the team and sport are the easy part. Operating independently, captains like Griswold and Holland are also responsible for coming up with funding to pay for league dues, jerseys, playing equipment, field time and referee fees.

Players are mainly responsible for league dues, while local sponsors help cover the costs for jerseys and balls. The team also puts together team calendars every spring, which are sold in an effort to raise money to keep the team financially afloat.

“It’s difficult because we play against teams that are supported and funded by the school,” Griswold added. “They have school coaches and the schools pay for coaches, when for the most part we’re coached by the players.”

These adversities are old struggles for New Blue. The team was formed in the early 1990s, and have been organizing practices and game plans by themselves until just last week, when they were able to find a coach in Marcus Satavu, who played for the United States rugby sevens team in the 2016 Summer Olympics. Satavu is able to attend one or two practices a week and was present for New Blue’s “home” match last Saturday, a 64-0 thrashing of Westfield. 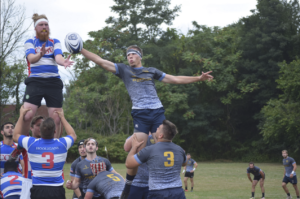 [/media-credit]When their per diem coach is unavailable, Griswold and Holland are responsible for running drills at practice, while doing their best to coach while on the field on Saturdays. It may seem like an undesirable situation, but the absence of a coach and school representation has been giving New Blue a unique advantage on the pitch.

“One of the nice parts about being a disaffiliated team is that other teams look at you and underestimate you,” Griswold said. “They’re always expecting to come in and see this un-coached team that doesn’t know what they’re doing. So it kind of gives us an advantage when they underestimate who we’re going to be.”

If opposing teams want to stop underestimating New Blue, they should take a look at the team’s history.

Despite being stripped of their club team label in 2001 and escorted from campus playing fields a year later, New Blue has been able to steadily climb through the divisional ranks. The team joined the New England Rugby Football Union in 2005 and promptly rattled off two straight unbeaten seasons, earning it a bump from Division IV to Division III. After winning the league title in 2012, New Blue was moved up again to their current Division-II ranking.

New Blue believes they have found their niche in Division II, having played Coast Guard Academy (ranked ninth) to a tie in the opening week of the season. After its blowout win against Westfield, New Blue moved up to No. 50 in the rankings after starting the season unranked out of the 115 Division II teams.

“Division II is the best fit for us,” Holland said. “We’re in a strong position to win the league and go compete nationally, but we’re not going to be blowing teams out all the time. Our main focus right now is to win league and make a run at Nationals.”

So how could a team with such scarce resources enjoy such prolonged success?

“We’re a zero-excuse team,” Holland said. “We have our disadvantages with not being affiliated, but we believe it has zero effect on our play. We think we can do it with or without support…we’ve had this team for years now, and we’ve won league titles and gone to regional playoffs. So we’re fine.”

New Blue remains content with their ability to play the game they love despite the absence of a student section in the stands or access to school athletic facilities. The team still clings to a ray of hope that one day, they will make a triumphant return to the Quinnipiac campus. They don’t have to look far for inspiration. In fact, they don’t have to look outside their own sport, given the recent success of the Quinnipiac women’s rugby team.

“Everything they have they worked for,” Griswold said. “We’re good friends with a lot of those players. They have inspired us. They went from a team created four or five years ago, and in the past two years have had two national championships. Coming to Quinnipiac and seeing those girls put in the work and get to that point, it tells us that we can do this too.”

While the women’s team continues to dominate on the national stage, New Blue continues to trend upward in the New England Wide Collegiate Rugby Conference, despite most recruitment being confined to word of mouth on campus. However, there are signs that their brand is growing, which New Blue sophomore Ben Mahon can attest to.

“I got into contact with New Blue before I came to QU,” Mahon said. “I sent emails during my senior year of high school… I knew QU didn’t have a rugby team, but every time I searched them, I found New Blue rugby.”

Students like Mahon won’t find a traditional college athletic experience at New Blue, but players still walk away with something of undeniable value.

For now, this close-knit group remains confined to their playing grounds on New Hall Street. It has been their home for years, and the short six-mile trip back to Quinnipiac seems like an eternal commute when it comes to regaining their school affiliation. As they patiently wait to be officially recognized as Bobcats, New Blue continues to rise up the rugby rankings while embracing their self-sufficiency.