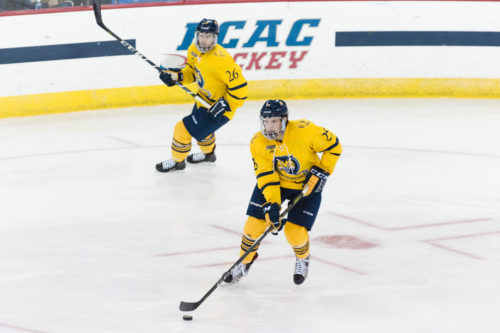 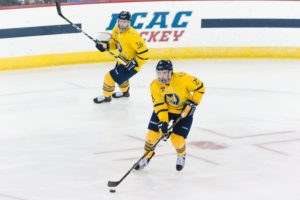 What was once a hopeful season was gone. No hunt for a Whitelaw Cup as ECAC Champions. No chance in an NCAA Tournament.

But like every season, there is room for improvement with a new one right around the corner.

On Friday night, the regular season commences when No. 14 Quinnipiac travels to play No. 13 Boston College.

The game comes five days after the Bobcats’ annual exhibition game against a Canadian opponent. This time, Quinnipiac welcomed Nova Scotia’s St. Mary’s University to Hamden, but the 3-2 win wasn’t all sunshine and rainbows.

As a whole, the team knows it needs fine tuning moving forward.

“We were extremely rusty tonight,” Quinnipiac head coach Rand Pecknold said after the exhibition game. “I would say that might have been the worst game faceoff-wise we’ve had in 15 years…it was pretty bad.”

Among the six seniors lost due to graduation, the departures of centers Tim Clifton and Tommy Schutt open up select spots down the middle of the ice.

Freshman center Odeen Tufto is one of 10 freshmen that make up the Class of 2021 and as the sizeable class fights for limited roster spots, Tufto was one newcomer that stood out in the preseason tilt. 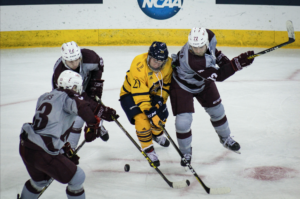 [/media-credit]Coming off a Clark Cup run with the USHL’s Sioux City Musketeers, Tufto centered senior forwards Landon Smith and Bo Pieper on what could be the Bobcats’ top line. The 5-foot-8 center put his offensive skills on display against St. Mary’s, but also showed that he is no stranger to physical play.

Tufto found himself surrounded by a pair of aggravated Huskies in the corner after generating one of many offensive opportunities against St. Mary’s.

“I think that in order to be effective I have to show my skill, but I also have to be tenacious out there and a hard worker,” Tufto said. “When I did that, good plays happened and some scoring chances came out of it.”

Up front, Tufto is joined by forwards Matt Creamer and Dan Nybondas as the most likely freshmen to crack the regular roster.

While Nybondas, a 6-foot-6 Finnish commit, was unable to play in Sunday’s game due to pending NCAA eligibility, Creamer played on the right wing of senior Kevin Duane and junior Luke Shiplo.

Juniors Thomas Aldworth and Scott Davidson both sat out on Sunday as well, leaving senior forward Tanner MacMaster the opportunity to center another pair of freshman forwards; Matt Forchuk and Devin Moore.

Forchuk (a natural center who led the AJHL in scoring with 97 points in 56 games last season) and Moore will most likely begin the season as the Quinnipiac’s 13th and 14th forwards heading into the regular season.

On defense, there is not much room for freshmen Joe O’Connor or T.J. Brown, as two junior transfers, Brandon Fortunato (Boston University) and John Furgele (University of New Hampshire), are set to play after sitting out their respective transfer seasons.

However, the biggest freshman addition comes between the pipes.

Freshman Keith Petruzzelli played the first two periods in the exhibition game, indicating that he will be Quinnipiac’s starter come Friday night and moving forward. 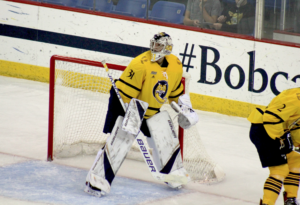 [/media-credit]While all signs point to Petruzzelli being the Bobcats’ No. 1 goalie, Pecknold reminds those in awe of the Detroit Red Wings’ third-round pick, that the Petruzzelli-(sophmore Andrew) Shortridge tandem could be one of the best in the country.

“It’s nice to have two guys we can count on,” Pecknold said. “Keith (Petruzzelli) did well for us in the first two periods, had some big saves for us, and [it was] tough for [Shortridge] to go in cold, but it was a good experience for him.”

Although there are some minor tweaks in the lineup as a whole, junior captain Chase Priskie knows that if the team wants to be successful, the returning veterans will have to be the ones taking charge.

“I think if the freshmen can come in and [find] any role they can play, [it] will help the team,” Priskie said. ”But to be honest, we’re really expecting a lot from the returners this year and for everyone to elevate their game.”

The Bobcats’ goals per game average was 24th in the nation, their power play ranked 32nd in the nation (18.3 percent) and they recorded a team shooting percentage of just 8.5 percent.

Nevertheless, the inability to finish could simply be the result of puck luck, according to College Hockey News’ advance stats.

Quinnipiac finished the 2016-17 campaign as seventh best in the country in terms of Corsi For Percentage (a stat that tracks any shot directed at the net, whether blocked, missed, off the post or scored) at even strength, while its PDO (the sum of a team’s shooting percentage and save percentage) was slightly below average.

The stats indicate that if the Bobcats maintain similar offensive numbers from last season, the end results should average out in their favor.

Even though the team hasn’t gone through significant changes in personnel, the Bobcats are bound to find results if they continue to push the offensive envelope.

[/media-credit]While returning forwards like Smith, Pieper, junior Craig Martin and sophomore Alex Whelan are poised for high-production seasons, Aldworth, Davidson, Duane and sophomore Nick Jermain are looked upon to enhance their efforts in order to help the greater good of the team.

“I think we’ll score a ton this year,” Martin said. “We all worked hard this summer to improve as a group and its given us a very solid four lines. We’re a much deeper team this year and I expect that to show.

Although the player is ultimately the one putting the puck in the back of the net, adjustments in coaching could help Quinnipiac’s cause as well.

But for Pecknold’s team, an area of uncertainty remains with depth at center.

In an attempt to balance the line combinations and provide another offensive spark, Pecknold is converting Martin from his natural wing to center. 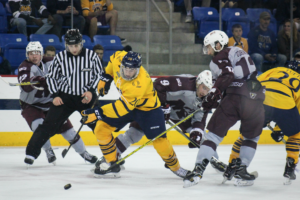 [/media-credit]“We’ve got cleaned out pretty good over the last two or three years at center,” Pecknold added. “I like [Martin] a lot. He’s played wing most of his life, he’s got high IQ, high compete and is a really good defensive hockey player. We think he can fill that role that Timmy Clifton did last year for us — and in previous years Matt Peca did for us — but I like where he is. He’s got some work to do on faceoffs and stuff, but he’s a pretty good hockey player.”

At the blue line, the only problem Quinnipiac has is a total defensive logjam.

There are simply too many quality defensemen to play at once, forcing Pecknold and his staff to make strenuous decisions.

One of the moves is pushing natural defenseman Shiplo up to left wing. Shiplo spent some time at wing last season and played up front against St. Mary’s as well.

After sophomore defenseman Karlis Cukste briefly exited the game as a result of a blocked shot, Shiplo showcased his resourceful presence.

“It’s nice that he has that versatility and can do both,” Pecknold said. “I thought he had a really good game on the wing and then [Shiplo] went back, took some shifts on D. It’s nice having that flexibility.”

However, among the solidified defensemen, the Bobcats are stacked. 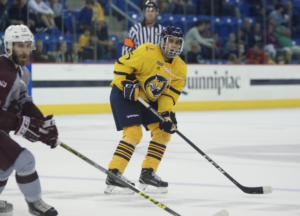 [/media-credit]Priskie and Fortunato make up the first pair, senior assistant captain Kevin McKernan and Cukste will serve as the second pair and sophomore Brogan Rafferty and Furgele look to round out the top six defensemen, while injured freshman Joe O’Connor will likely serve as the seventh defenseman.

“We have six solid defensemen out there, so it’s hard to have a ranking system one to six,” Priskie said. “But if we bring six guys to the table and are all willing to play to our identity, it’s tough for teams to beat us.”

With two of Quinnipiac’s potential toughest games of the year coming this weekend, followed by three consecutive non-conference games (Vermont and Northeastern), the season’s tone will be set before ECAC play in November.

With the exception of spread out non-conference games (UMass Amherst, Maine, UConn and Arizona State), the ball will certainly be rolling by the time conference play is in full swing.

“I think we start to hit our stride in November,” Pecknold added. “October, for everyone in college hockey, is just kind of ramping it up a little bit, but we’re all in the same boat. In previous years, we’ve been good in October, so October is a good month for us, but we’ll see. We’re looking forward to this weekend and playing a couple of the best teams in the country.”

On Sept. 25, Quinnipiac was picked to finish second behind Harvard in both the media and coaches ECAC preseason polls. Along with Crimson sophomore defenseman Adam Fox, Priskie was the only Bobcat named to the preseason all-conference team. 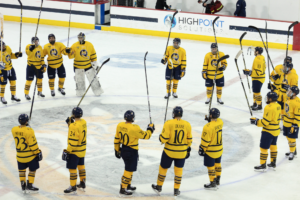 [/media-credit]With a revamped group of leaders, a well-built blue line and a solidified No. 1 goalie, Quinnipiac looks to get back into the NCAA Tournament after missing the mark for the first time in five years.

“I think we’ve got something good here,” McKernan said. “We have big goals this year and we’re going to do what it takes to get there.”