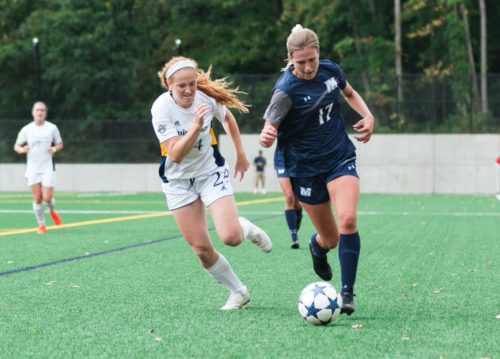 The Quinnipiac women’s soccer team fell to the defending MAAC champion Monmouth Hawks, 2-0 at home on Saturday afternoon. The loss came on the terms of last season’s MAAC championship game, which the Bobcats also dropped 5-2. 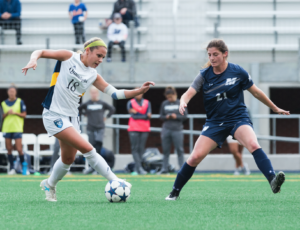 [/media-credit]Quinnipiac players and coaches acknowledged the game had an extra amount of intensity that isn’t typical for a regular season matchup.

“It had like a playoff feel to it and obviously just the fact that last game that we played [Monmouth] last year was the final too” Quinnipiac he coach Dave Clarke said. “As I said all along, any team that’s going to be winning the MAAC down in Disney (location of the MAAC Soccer Championship), is going to have to knockoff both teams.”

“Before the game I was getting the same feeling and nerves that I got for the final of the MAAC (Championship) last year and it brought emotion that [Clarke] doesn’t like in the game” Gargan said. “I wanted revenge really badly, and I think we all did as a team, and I think we let it get to us too much and we didn’t do a good enough job. [Monmouth] handled it better than wen did.”

Despite emotions running high, the Bobcats didn’t open with equal intensity to Monmouth.

Two minutes after the opening touch, the Hawks put in a defining early goal from senior forward Rachelle Ross. From that moment the Bobcats were forced to play from behind for the rest of the game, as they fought to recover.

Clarke was keen on keeping the team’s emotions in check for the next big game, which was an area of concern for him.

Monmouth had come into the match on a five-game run where they had not allowed a goal. The Bobcats were not able to break through, as they only managed five shots the whole game.

“It’s just a matter of execution,” Clarke added. “You look at the results over the last seven to eight games…they’ve only conceded one goal in eight games, so that’s what we were addressing all week and we played right into the hands of them.”

Monmouth put their foot on the gas and added another goal with 11 minutes in the first half. Redshirt sophomore forward Madie Gibson was credited for the shot on Monmouth’s side.

The first half concluded with the Bobcats making a run through the Hawks’ defense until junior forward Madison Borowiec was beat to the ball in front of the Hawks’ net by the Monmouth goalkeeper. 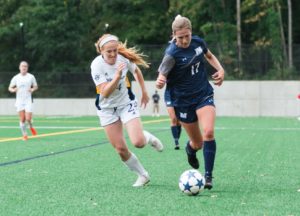 Senior forward Nadya Gill thought it was not the physicality of the game that was off, but instead the team’s emotions that ran too high.

“Regardless of the amount of cards we got, we went in, we worked very hard, and we put in everything we had.” Gill said. “Physically I think we matched them, it was just mentally the emotion, like Jess [Gargan] said at the beginning, and Dave [Clarke] obviously talked about [how] we need to control [our emotions].”

Nearing the last leg of the second half, Quinnipiac finally started to settle into the game. They created multiple runs up through Monmouth’s defense which led to several unsuccessful, yet close crosses.

Just as it was most of the game, misconnections on such plays were detrimental for the Bobcats. Even a few free kicks and corner kicks in the second half resulted in missed opportunities.

At the final whistle, the Bobcats had tallied 18 fouls and were unable to score on Monmouth, losing 2-0.

Nevertheless, the Quinnipiac players remained dead set on having another chance to face the Hawks in the upcoming playoffs.

“The playoff atmosphere was there,” Gill said. “But hopefully now that we’ve experienced it, the next time we play them we can really settle down a bit and play our game.”

The Bobcats still have five regular season games left before the playoffs begin and sit at an overall record of 6-5-1, with a 3-1-1 conference record.

Good news for Quinnipiac came in form of the return of sophomore defender Mackenzie Tiball. Tibball returned from a three-game absence due to injury.

“Mackenzie provides a balance because [she’s] a left -footed player. I like to have a left-footed player on the left side.” Clarke said. “[Hopefully] we can get her back to match fitness because she was playing well before she went out.”

The Bobcats’ upcoming matchup comes against the Rider Broncos (2-8-1 overall) on Wednesday Oct. 4.