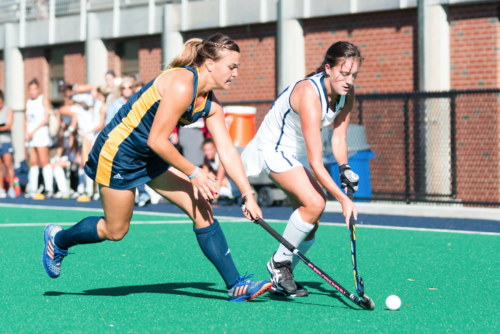 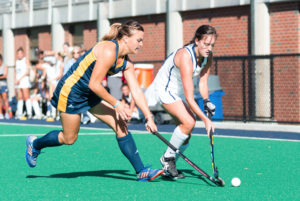 [/media-credit] The loss is Quinnipiac’s first of the season in conference play.

“[It was a] bad first half, good second half,” Main said. “We forgot that this was a conference game, and by the time we got to the second half, we had trouble finishing and was down three starting forwards.

It was Martinez’s second goal of the season, but Villanova was unharmed as they took a 2-1 lead on a goal by their top-scorer Lydia Sydnor. Sydnor has five goals, nine points, and nine shots on goal this season.

In the second half, Quinnipiac was able to create chances on net, but could not convert. The Bobcats went 1 for 10 on penalty corners and had 12 shots on goal. 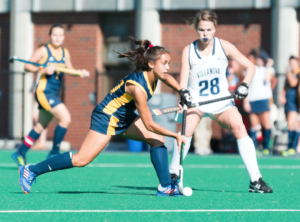 [/media-credit]Quinnipiac was unable to finish in that area, indicating that penalty corners are something the team has to work on frequently throughout the season.

“It’s a daily effort for us,” Main said. “We looked for those players to have their day, and unfortunately none of them did, their goalkeeper scouted us very well.”

The offensive play of graduate student Montana Fleming was encouraging, as she had three shots and and was involved in the majority of Quinnipiac’s scoring chances.

Despite the offensive chances, there are improvements to be made in order to convert.

“We have to show up to every single game, with our full team and full effort,”  Fleming said. “But today we couldn’t do that.”

Up next, the Bobcats see another tough opponent as they try to pick up their first road win of the season on Saturday against Bucknell (3-2).

“Bucknell is very similar to the team we just played,” Main said. “We have to make adjustments in the personnel, just like we did against Yale, and we’re traveling tomorrow (Saturday) so we can watch an hour of film and make the changes we need to make.”