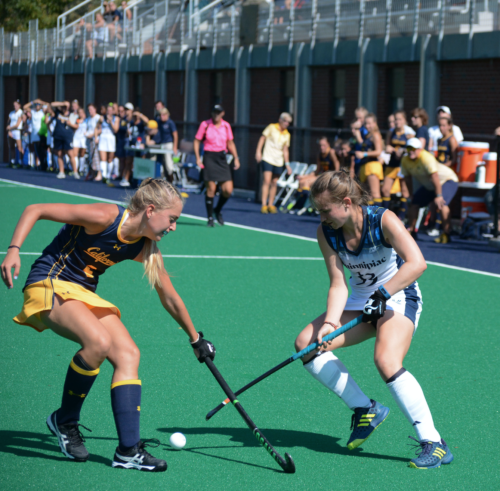 The Quinnipiac field hockey team (3-7) fell to out-of-conference opponent California (6-3) by a score of 3-2 at the Quinnipiac Turf Complex on Sunday. Despite taking an early lead, the Bobcats could not bounce back after falling behind in the second half. 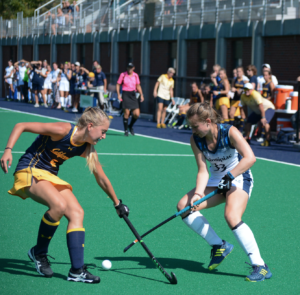 [/media-credit]Senior midfielder Dayna Barlow scored the game’s first goal to give the Quinnipiac the early lead. The first half seemed to be all Quinnipiac as it held California scoreless despite four shot attempts.

Sophomore goalkeeper Livy Golini made a save in the first half’s last minute of play on Golden Bears forward Janaye Sakkas to keep the Bobcats on top going into the second half. The last-minute save was one of five saves in the game for Golini.

California began to change the pace of the game in the second half. California’s Janaye Sakkas and Katrina Carter scored two goals within the first 10 minutes of the frame. Overall, the Golden Bears put up nine shots in the second half compared to Quinnipiac’s seven.

Penalty corners proved to be a big part of Quinnipiac’s game, too, as it scored on two out of five opportunities. The Bobcats also kept a firm grasp on California defensively, not allowing a single penalty corner for the Golden Bears.

“How often can you play a team like California and say you didn’t give up any [defensive penalty corners]? So attack corners obviously they have been a strength for us,” head coach Becca Main said. “We’ve relied on them in the past and they kept us in the game, they were beautiful today.”

Junior midfielder Anna Walmsley gave the team life late in the last five minutes of play with a goal scored off a deflected shot on the penalty corner to put the Bobcats within one.

In the final minute of regulation, Quinnipiac came close to tying the Golden Bears, but its final shot attempt could not find its way to the back of the net.

Main believes the biggest positive from Sunday’s loss is the efforts put forth by her offense.

“We’ve struggled a little bit with getting attack going. I liked what my forwards did. They pulled out of the space, they left the space open for the mids and the mids found them,” Main said. “So, I really felt we were joined today, especially in the forward and midfield line.” 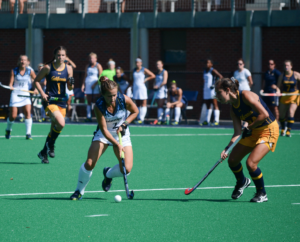 [/media-credit]Next up, Quinnipiac will take on Big East opponent Villanova on Friday at home, as the team attempts to remain perfect within the conference.

According to graduate forward Montana Fleming, the team aims to win as many games as possible, but the key focus is its Big East matchups.