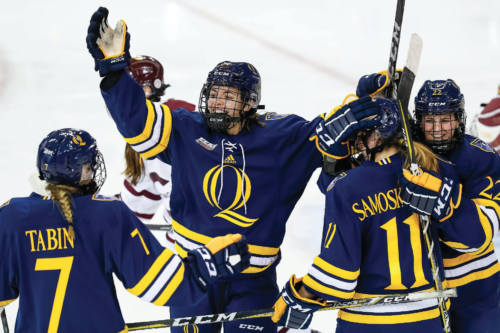 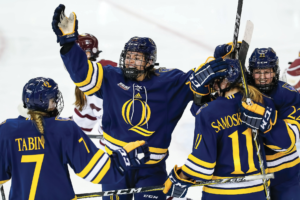 She said prior to the exhibition that the team was embracing the scrimmage between the Stingers due to their successful track record (14-9-3 overall in 2016-17).

“We look at [the scrimmage] as preparation for upcoming games,” Samoskevich said. “Concordia did good in the national tournament this year. I feel like this will be a good matchup for us.”

Last season, the Bobcats finished the year fifth in the ECAC, posting a 21-10-6 overall record. They played Princeton in the first round of the ECAC women’s hockey tournament and lost in the best-of-three series 2-1.

After making an NCAA Tournament appearance in 2015-16, there is no hiding that the early exit was a disappointment.

Going into the 2017-18 season, the USCHO.com women’s preseason poll ranked the Bobcats No. 9 in the nation.

The next day, the ECAC coaches preseason poll was released and predicted that the Bobcats would finish fifth in the conference.

Although the Bobcats are one of the top 10 women’s ice hockey programs in the country, the mentality is as it’s always been; rankings are just numbers.

“[The numbers] change so much in the beginning of the year,” Quinnipiac head coach Cass Turner said. “It truly is just a number. We talk a lot about having pride in the process and having the mindset to get better every single day.”

The Bobcats have their minds set on making the NCAA tournament this year, but if they are going to get there, Turner notes that they have to focus more on the bigger picture.

Samoskevich also emphasizes that even if the team is playing well, there’s always something they can look to improve on.

“If we have a good day then we should build from it instead of just taking it for granted,” Samoskevich said.

Samoskevich attended the 2017 U.S. Women’s National Team Selection Camp this past May and Cianfarano was selected third overall in the NWHL Draft by the New York Riveters.

Cianfarano is also a frontrunner for the Patty Kazmaier Award which is given to the top player in NCAA Division I women’s ice hockey.

Samoskevich and Cianfarano were the points leaders for the team last season with 29 and 26 points, respectively. Kenzie Prater led last year’s freshmen class in points with 16.

Quinnipiac has been known more for its defense than its offense over the past decade, particularly in the crease. Before Rossman broke several program records, it was Chelsea Laden (‘15) who had set the bar for goaltending. Before Laden, it was Victoria Vigilanti (‘13) who set the bar.

It seems that every new goaltender that comes into the program keeps raising the goaltending bar, and this year sophomore goalie Abbie Ives will attempt to live up to these sky-high expectations.

“We’re certainly going to miss [Rossman], but I feel really excited about what we have going into this season,” Turner said. “Abbie Ives, playing in only four games, saw some time against good teams. She’s only allowed one goal in her career so far.” 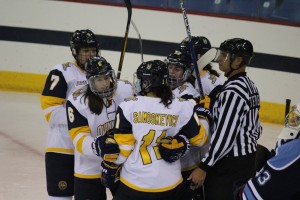 [/media-credit]In the offseason, Rossman signed a one-year contract with the NWHL’s Connecticut Whale while Woods and Baumgardt were selected in the CWHL draft by Kunlun Red Star and the Calgary Inferno respectively.

While there are many notable departures, the Bobcats have plenty of new faces in Hamden this season as well.

“I expect to see Grace Markey and Taylor House make an impact up front right away,” Turner said. “Same with Allison Small. She brings a lot of experience and had a great year in the [Provincial Women’s Hockey League].”

Much like Turner, Samoskevich’s goals for the season rely on a full team effort.

“My expectations for them and for anybody on the team would be to buy-in,” Samoskevich said. “I feel like if we do that and we’re all on the same page then we could win a championship this year.”

The Bobcats also acquired Anna Kilponen, who transferred from the University of North Dakota after their hockey program was disbanded.

“[Kilponen] brings so much to our program, and with us losing Emma Greco and Taryn Baumgardt due to graduation, she is going to make a big impact for us straight away,” Turner said.

New faces from last season were able to come into Quinnipiac and contribute to the team right away. Kenzie Prater, Kati Tabin and Sarah-Eve Coutu-Godbout found themselves getting a considerable amount of ice time in their freshman season.

Quinnipiac will open up its regular season on the road against Maine. Last season, the Bobcats opened the regular season against the Black Bears as well and outscored them 8-4 in a weekend series.

The Bobcats host Providence in their home opener on Saturday Oct. 7.

The Bobcats will play the defending national champion Clarkson on the road on Nov. 17 at 6 p.m. and play and home-and-home series against Princeton on Dec. 8 at 6 p.m and Dec. 9 at 3 p.m.

Regardless of projections and expectations, the Bobcats are just excited to hit the ice once again.

“Every practice, we haven’t had a bad day yet because it’s new,” Samoskevich said. “We’re a new team. We’re in a new system it has a good feel and it’s great.”