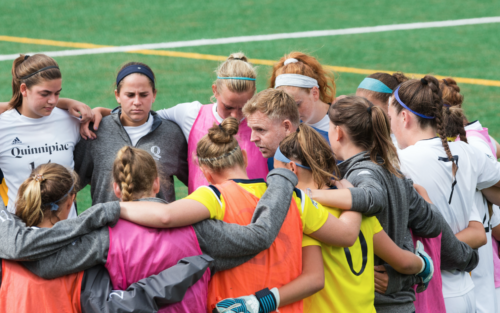 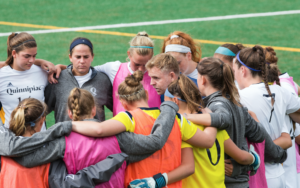 [/media-credit]Quinnipiac women’s soccer assistant coach Steve Coxon has a stature and character that belongs on your television screen in an English Premier League match with the likes of Wayne Rooney.

Coxon commands the pitch on the sidelines for Quinnipiac. He can be seen striding up and down the bench on game days making sure each of his players are ready to give their all.

Coxon hails from Newcastle, England, a city famously known for its soccer pride.

“Newcastle is a hotbed for soccer,” Coxon said. “It produces a lot of professional [soccer] players. Growing up there was interesting.”

Coxon experienced high levels of soccer at a young age, even playing for Newcastle’s junior program with one of England’s greatest soccer players, Paul “Gazza” Gascoigne.

But the life of a professional soccer player, at least in his homeland, was not the path Coxon chose. He had multiple stints as a professional player, ultimately finding his passion in the form of coaching the sport he had played since he was 3 years old.

“[Soccer has] always been a constant in my life,” Coxon said. “It brought me to America, it afforded me the chance to get a full scholarship, it afforded me to build my business. Everything I do has evolved around this sport.”

Coxon, who his players affectionately call “Stevie,” said all he has done for the game of soccer is all due to his “relentless” nature.

His efforts earned himself an induction into the Connecticut Soccer Hall of Fame, establishing a 200-team youth soccer club, known as the Connecticut Football Club, that includes two indoor field complexes, and last but not least, coaching on the sidelines for Quinnipiac since 2005.

“Relentless is a good description of how I live my life,” Coxon said. “I just grind it out, that’s how I’ve done what I’ve achieved, just showing up every day.”

As a coach, Coxon constantly tries to personify positivity to his players. Senior forward Nadya Gill says that his approach is to bring positivity to the locker room.

“[Stevie’s] always looking to get us going. Before every game, he gives us a presentation telling [the team] to envision the game and use positive self-talk.” Gill said. “His whole philosophy with us is to stay positive, set goals and eventually achieve them and be successful.” 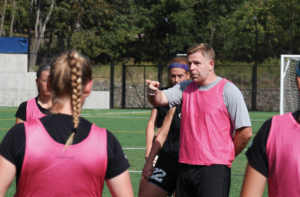 [/media-credit]Furthermore, Gill shared her biggest takeaway of the many lessons Coxon has shed upon her and her teammates, which he calls the “White Rice Experiment.”

The experiment involves a procedure of setting two bowls of rice next to each other, and labeling the first bowl with the word “love” and the second with the word “hate”.

The next step requires speaking to each respective bowl with positive and loving words to the first bowl, and negative and hateful words to the second bowl. The result of the experiment ends after a few weeks of repeatedly speaking to the bowls of rice.

Scientific integrity aside, the intended meaning from the experiment is a lesson of the resiliency of positivity. For Coxon, this is not only a lesson for the soccer field, but also a moral compass for life.

“It’s all about the girls being positive for each other, especially when bad things happen”, Coxon said. “We can all be positive when we are winning 11-0, — (which Quinnipiac was able to accomplish last week) — but when [you’re] down 2-1 and there’s five minutes to go, and things aren’t quite gelling, can you stay positive? Can you keep encouraging? Bad things are going to happen to you on the field, and in life, how do you react to that? That’s the true test of your character. Are you relentless?”

The word, “relentless” keeps coming up, that is no coincidence.

In fact, relentlessness truly characterizes the impact Stevie has been able to make upon the players and those around him. Coxon has now been with the Bobcats for 12 years, and in a way, he is a living embodiment of Quinnipiac.

Just as Quinnipiac students and professors are constantly striving forward, so is Coxon.

He described himself as “somebody who can’t sit still” and relates that to how he has seen Quinnipiac grow and flourish in his years here,

[/media-credit]“I’ve always felt that [Quinnipiac] has been on the up-swing, all the time since I’ve been here…it’s never been stagnant,” Coxon said.

It is no surprise then that Coxon’s own journey from Newcastle to Connecticut is a story of that relentless drive to never giving up.

In 1987, an 18-year-old Coxon received a full scholarship offer from Central Connecticut State University (CCSU) to play soccer. He took the offer and made his way to across the Atlantic Ocean to Connecticut.

Little did he know he would come to call this place home. At CCSU, Coxon played three years, graduating with a degree in sociology and coincidentally met his future coaching partner and lifelong friend, Quinnipiac women’s soccer head coach Dave Clarke.

Even back then, the two found they had complementary personalities on and off the pitch.

Clarke played left back and Coxon was spread on the same side at left mid and often times up front at attacker for CSCU.

“My role at the time was to stop goals and give him the ball, and let him do all the running in front of me.” Clarke said.

Now their roles are reversed, as Coxon supports Clarke on the sidelines.

Clarke acknowledges how the differences between he and Coxon have made them even closer friends.

By Coxon’s senior year and Clarke’s junior year, the two roomed together off campus.

“It was almost like ‘The Odd Couple,’” Clarke laughed. “We have totally different personality traits, but then we also have shared soccer views, world views, [and on] the way the game is [played].”

Although soon after Coxon finished his final season at CSCU, he went off on his own to pursue a professional career. He returned to England to have a chance at a professional career in the English Premier League. After that did not pan out, Coxon came back to Connecticut, and played in a pre-cursor league to the MLS, professionally for the Connecticut Wolves, until 1997.

After that hiatus, Coxon reunited with Clarke at the University of New Haven on the women’s soccer team’s coaching staff. Stevie said he gave up his professional career because he became a father.

“I had my first child, and I realized I couldn’t continue playing up and down the east coast,” Coxon said. “So, I had to settle down and that’s when I started coaching with Dave [Clarke].”

Today, by attending a Quinnipiac women’s soccer game, you can see this duo is still thriving 29 years later.

Coxon can be seen pacing along the sideline, emphatically cheering his players on, while Clarke remains arms-crossed, observing and calculating.

Coxon and Clarke find a sort of equilibrium with each other that is rare to find in coaching.

“The first thing with Steve is the loyalty. You need that in an assistant coach,” Clarke said. “It’s like a Yin and Yang type of thing [for us]…we trust each other impeccably.” 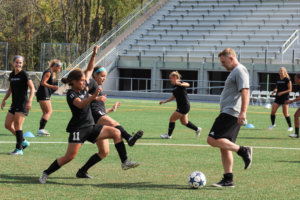 [/media-credit]As the 2017 season continues on for the Bobcats, Clarke and Coxon look to keep the team striding up in the ranks.

The team recently matched up against the Quinnipiac’s first ever ACC opponent in the Miami Hurricanes on Sept. 3.

Even though the Bobcats fell to Miami 3-1, Coxon had no doubts in the team’s capabilities.

“The team’s goal has been the same since we walked off the field in the final last year against Monmouth,” Coxon said. “To go back and win the MAAC Championship.”

Going forward, Coxon will continue to pursue all his Connecticut Football Club duties as co-founder whilst focusing his energies on Quinnipiac. Coxon’s CFC organization is currently building a new indoor complex in Bethany, Connecticut which will span 60,000 square feet.

As for the future, Coxon said his goal is to own a successful professional team.

“I’ve always had the goal of owning a professional soccer franchise,” Coxon said. “I think in the back of my mind in 10 or 15 years…The one part of my soccer resume, until I fulfil that, I feel like a little portion of it is missing. I think what drives all this, not getting too deep, is that when I was playing as a youngster, I thought I should’ve been a professional player, and not having fulfilled that still makes me want to fulfill that in some other way.”

This year marks the 30th year Coxon has been involved in various aspects in the Connecticut soccer community.

Perhaps one day he will be inducted into the Quinnipiac Hall of Fame as well.

“My favorite part [about being at Quinnipiac] is being around good people,” Coxon said with a smile. “I love it here. They have provided us with every opportunity to succeed.”