My experience going to a sex-ed boot camp 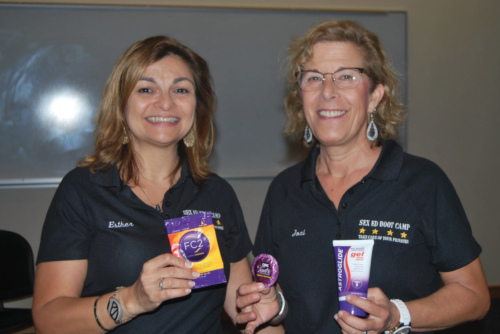 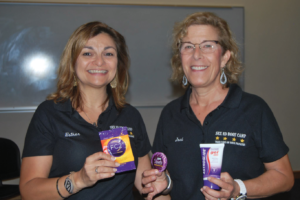 [/media-credit]Guest speakers Dr. Joni Frater and Esther Lastique stopped by for a sex-y informative chat with roughly 25 Quinnipiac students Monday night in the Mount Carmel Auditorium. Their program, Sex-Ed Boot Camp, spewed a load of knowledge all over us. They spent an hour and a half going over different methods of protection, healthy relationships and tips on how to have great safe sex.

Walking towards the Mount Carmel Auditorium Monday night, I didn’t know what to expect. Going to a Sex-Ed Boot Camp seemed like it could be either funny or extremely uncomfortable, but I didn’t think I would learn anything I didn’t already know. You know, use a condom, get tested, don’t send nudes, blah blah blah.

Immediately upon entering, there was a table full of female condoms, flavored condoms, regular condoms and dental dams. I grabbed a program and about a handful of condoms (for research, I swear) and sat front row and pulled out my notebook. Now I probably looked way too overeager sitting in the front row, with a notebook, a pile of condoms and no friends. But I figured if I wrote ‘The Chronicle’ in big letters on the top of my notebook, I would be safe.

It was very important to them to create a safe space.

“We understand that for those of you that have never had this kind of an open and honest conversation around sex and sexuality, you might have some voices in your head,” Lastique said. “If that’s what you’ve heard so far especially if they involve anything that resembles shame or guilt we’d like to invite you to leave those at the door.”

“These people are hired for their anatomical properties,” said Frater.

Talking about relationships, they brought up the four pillars of healthy relationships: honesty, respect, equality and responsibility.

“All four pillars need to be there,” said Frater. “Or it’s like having a table and cutting off a leg, the whole things going to fall over.”

Eventually we got to the fun part. SEX (ed)!

Let me just give you guys a quick run-down of what I learned.

It takes women 15-20 minutes to orgasm

In the state of Connecticut, if you are under the influence of any kind, you have negated consent- which means you cannot legally give consent.

Reverse Cowgirl? NO. The penis does not naturally bend that way and you can tear a vein. The pain has been compared to childbirth and kidney stones.

You can pass STDs through your hands. So wrap your hand too. Basically anything that’s going to come into contact with fluids should probably be wrapped

Overall, the experience was great and I left knowing so much more than when I entered.

The ladies were so friendly and welcoming. After the talk, they willingly answered questions and gave mock demonstrations on how to insert a female condom. The atmosphere of the room was fun and light, there was never an awkward moment. Although I don’t think my friends will ever look at me the same after I explained the concept of a dental dam with a full demonstration in their common room.