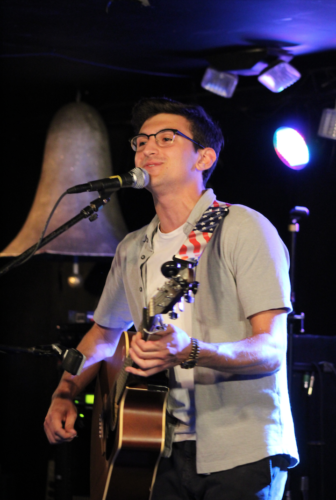 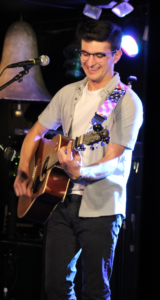 [/media-credit]Each member of the audience had an alien tattooed on the back of their right hand and an appreciation for live music on Saturday night, Sept. 23.

The multi-colored light bulbs hung low from the ceiling at The Outer Space in Hamden. The collaged walls provided a sense of history. There were about 25 people at the intimate concert featuring junior journalism major John Franklin.

The atmosphere at the venue that night was one of comradery.

A little over half of the audience members were brothers of Franklin’s fraternity, Pi Kappa Phi. His parents, Carol and John Franklin, were both sitting at the high top tables, along with his younger sister, Victoria Franklin.

“Music is important to me because in general, it gives people a really good outlet,” Franklin said. “It’s hard to find the right way to express yourself, so if someone can express those feelings for you,  it means a little bit more.”

He sauntered onto the stage like he was meeting an old friend for coffee—comfortably. The stage lights centered on him and his guitar.

Franklin looked out into the crowd, said that he knew every person in that room and that people should fill in the middle because he felt like he was at an eighth grade dance and he was the girl no one wanted to approach.

The aspiring artist grew up in Caldwell, New Jersey. His mother said he started showing an interest in performing and musical instruments when he was in middle school. The hobby has grown into a passion ever since.

“Within months (of John starting the guitar), everything changed,” Carol Franklin said. “He started to take off.”

Throughout the entire show that night, Franklin’s father stood on the side of the venue leaning against a post looking up at his son. A smile never left his face.

Franklin started his musical career with the trumpet, but his father convinced him to try out the guitar. He started lessons in fifth grade and continued through his senior year of high school.

His father said that Franklin gets the musical talent from Carol’s side of the family but the vocals from his side.

“My mother and daughter both have beautiful voices, so that’s where he got that talent from,” Franklin’s father said.

Franklin said that his parents surprised him by coming to his show.

“My parents are awesome,” he said. “The fact that they even came from New Jersey for the show was a surprise. I didn’t know that they were coming. I played for an hour and 45 minutes that night. Yeah, that’s a long time to play, but that’s shorter than the drive it took to get here.”

Franklin’s background in musical theater helped him become comfortable in front of a crowd and helped him determine his major of journalism coming into college.

“It’s not easy to make it big in either journalism or music, but when you have parents like mine who are willing to support that dream, it makes it a lot easier,” Franklin said. 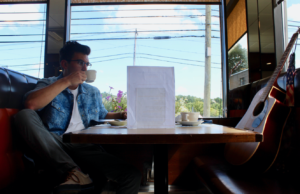 [/media-credit]Franklin said that he views journalism as another type of performance and that is why he loves his major so much.

At the beginning of his sophomore year, Franklin was in a band called ‘Brookline’ with two of his fraternity brothers. That is when he stepped outside of the Quinnipiac bubble and began playing at venues in Hamden.

The band played at The Outer Space and performed a lot of early 2000s music. When the two brothers graduated, Franklin reached out to the venue as a solo performer.

“It ended up being the best decision I ever made to start getting out there,” Franklin said. “It is hard to get a big crowd on campus.”

On Saturday night, before each song, Franklin had a story to tell. He addressed the crowd before playing one of his originals and said that although the song may sound depressing, he doesn’t necessarily get his inspiration from within- he just writes.

He played some of his original songs during his set at The Outer Space. Those songs included ‘My Heart Won’t Break Over You’ and ‘Mascara.’

“An upbeat song that I played that actually a lot of people came up to me after and said they really liked was ‘Mascara,’” Franklin said.

The knocking of his knuckles on the hollow wood of the guitar between chords kept the beat alive.

We wake up with our head pounding from all the Jack / A night full of regrets but we never look back / I don’t remember much I thought this was a dream / But when I look in the mirror, there’s one thing I see / Your mascara all over me.

“A lot of the songs I play are slower, they have a certain vibe to them,” Franklin said. “I am a really big Ed Sheeran fan and a lot of his stuff is very slow.”

He said that one time he heard someone say to someone else, ‘my mascara is all over you,’ and that’s where the song’s chorus came from.

“A lot of times, I’ll come up with a really cool chord progression and that will determine what I am thinking, and those thoughts will determine the song,” Franklin said.

At one point during his set after he finished covering “Can’t Take My Eyes Off of You,” by Frankie Valli and the Four Seasons, you could feel the energy in the room.

“That’s some baby making music right there,” Franklin said to the crowd.

Franklin would occasionally look out into the audience, find his best friend Pat Pitts, a junior journalism major, point to him and smile.

Franklin described Pitts as the brother he never had. Franklin and Pitts met three months into their freshman year, but did not become best friends until Pitts moved onto Franklin’s futon in Ledges due to roommate problems.

Sophomore year, the boys were direct roommates, and this year, they are living in an off campus house together.

“Wherever I go, Pat Pitts will always be there and wherever Pat Pitts goes, I’ll be right there by his side,” Franklin said. “There is no Pitts without Franklin and no Franklin without Pitts at this point.” 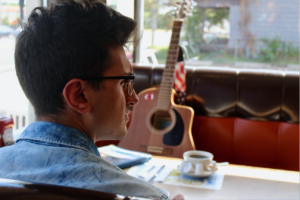 [/media-credit]Franklin characterized Pitts as supportive and loyal. He said that if he was playing a show in Alaska next week, Pitts would try to buy a plane ticket to go see the show.

“When he is out in the crowd and I am performing, it makes life easy because he will sing and get into it and have fun doing it,” Franklin said. “He uplifts the crowd as much as I want to without being in the show.”

Pitts said he and Franklin have a connection unlike any other on campus.

“Being in the audience is so fun,” Pitts said. “I know what he is going to do on stage before he even does it because I’ve heard him rehearse a thousand times at our house. He feeds off of my energy, he looks to me to get the crowd going.”

Franklin has a big presence on stage and it is evident that he feels at home standing in front of a microphone with a guitar in his hand, but it wasn’t always second nature to Franklin.

Franklin’s first live performance was his junior year of high school. He was sitting on stage just playing songs without talking to the audience. He remembers messing up playing ‘Banana Pancakes’ by Jack Johnson, looking out into the crowd and getting flustered. He said that he told a joke in that moment, the crowd laughed and that comforted him.

He now knows how to gauge a crowd and how they will react to certain songs. He loves to stand on stage and tell stories about his connection to the songs.

Aside from performing in every sense of the term, Franklin loves being a journalism major, a brother of Pi Kappa Phi and a student at Quinnipiac University.

“Being a student of this community has been the most rewarding thing to me,” Franklin said. “This school allowed me to find my niche and do it right away.”

As far as what the future looks like for Franklin, he is looking to have fun with his music and grow his credibility as a musician for the next two years. 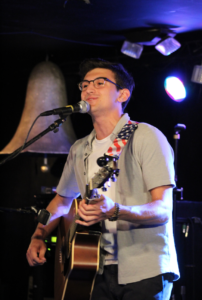 [/media-credit]“Obviously it’s my dream to keep playing music, but it’s not necessarily realistic,” he said.

This past Saturday was the first time Franklin has ever gotten paid for performing.

“This was the first gig I was paid to play in,” he said. “I didn’t think I was getting paid. I only made 40 dollars but it was so cool because at that point I’m billed as a professional musician because I made money doing it. This is the first time I get to be called a professional musician. Now I have credibility as a performer. I only have two more years to grow that credibility. I will take music as far as music takes me.”

According to his father, Franklin can do whatever he wants.

“If John wants to take music as the strongest part of his life and move it forward, that’s up to him,” his father said. “John will accomplish anything John wants to accomplish.”