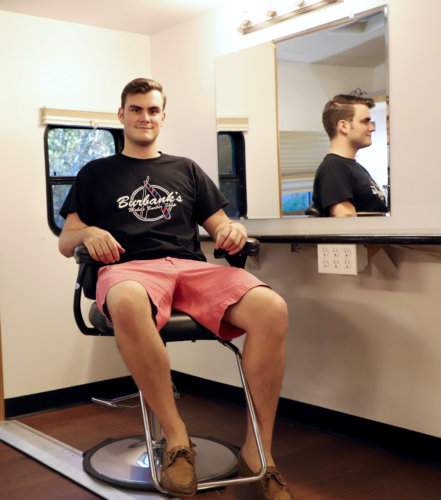 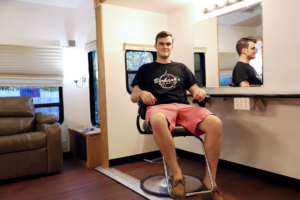 [/media-credit]For many students at Quinnipiac, entrepreneurship is simply a field of study or a required class, but for junior Cameron Burbank, it’s a way of life. At the age of 20, Burbank is undoubtedly an entrepreneur, launching his unique business model right here in Hamden.

“All throughout high school, I was very interested in engineering,” Burbank said. “I was doing a lot of that, I did a lot of design work and creating things and that led me to figure out that I really like business and I wanted to start my own business. (I want to) recognize a problem that a market has and then build something or design something to solve that problem.”

Finding this flawed market was an easy task once Burbank arrived at Quinnipiac two years ago.

“When I got here, as a guy who does take care of his hair, I realized that there is nowhere to get his hair cut,” he said. “That’s when the annoyance started.”

Burbank claimed that the most effective method to establishing a good business plan is to write down your own list of annoyances, and for him, the issue of finding a quality haircut in Hamden continually rose to the top of his list.

After consideration and stipulation of how to solve this issue, Burbank ruled out an on-campus barber and landed on what he calls the obvious answer: a mobile barber shop.

“I pitched it to one of my entrepreneurship professors (last year)… and when I told him this he said, ‘You know, you should enter into the Connecticut State Business Plan Competition,’ so that’s exactly what I did,” Burbank recalled. 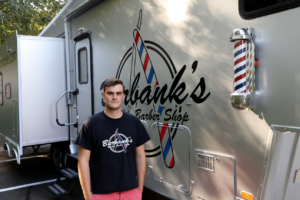 [/media-credit]Burbank went on to apply, attend and win this competition, an accomplishment that made him realize that even professionals unaffiliated with universities saw potential in his idea.

Now realizing that this dream could become reality, Burbank began interviewing barbers, researching trailers and contacting owners of existing mobile businesses to determine what problems he would ultimately face and could potentially avoid if he followed through with this unique idea.

“My professors have all been very supportive. They see the market, butthey are still very challenging of it because that’s what they’re trying to get me to do, think deeper into it,” Burbank said.

Burbank credits associate professor of entrepreneurship and strategy Dale Jasinski in particular with helping to develop his idea. Jasinski was one of the first people Burbank told about this idea and he believes Burbank has the proper work ethic to lead a successful business.

“My expectations for Burbank’s Mobile Barber Shop are that he takes it to whatever level of success he desires,” Jasinski said. “The great thing about entrepreneurship is that it gives you choices and the path ahead for (Burbank) presents many great opportunities.”

Burbank’s motivation did not only come from the Quinnipiac community.

“My family has been extremely supportive and I’m very thankful for that,” Burbank said. “I wouldn’t be able to do it without them.”

Burbank said that his mother has been his biggest supporter and main inspiration throughout this process. Illa Burbank recently became the president of her company after beginning as a part-time employee. 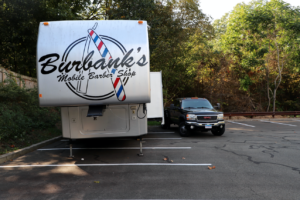 [/media-credit]“I’m very proud of her,” Burbank said. “As I’m sure you can imagine on June 29, the night before I wrote the biggest check of my life (for the trailer,) I was rather nervous but she was like, ‘You know you’ve been wanting to do this for a while, you’ve just got to do it,’ so I did it.”

Burbank’s pride in his mother is certainly mutual. Illa Burbank recalled her son’s interest in the business world from a young age.

“Cameron has always had an entrepreneurial mindset,” she said in an email interview. “For years he has a kept an ‘idea book’ in which he writes down potential products and/or services that might fill an unmet need. This spirit continues and shows that he is willing to try something and has confidence that he can do.”

With this background in business and finance herself, Illa Burbank initially reacted to her son’s idea with hesitance and concern, however, she has faith in her son’s ability to plan and drive to succeed.

“This experience for me has shown that sometimes you just have to take the leap,” she said. “Although I would not have done that at his age due to my more cautious nature, I fully support his endeavor. I’ve seen what great things can happen when you pursue your dream.”

With the motivation, research and support he needed, it seems only one thing was stopping Burbank from starting his business: a trailer.

“I ended up on June 30 purchasing a used trailer… There was a lot of hunting to find the exact right one because I had to find one with the overall floor layout that I wanted,” he said.

Despite this perfect floor plan, Burbank says the first thing he did was gut the trailer before installing new walls and countertops himself. 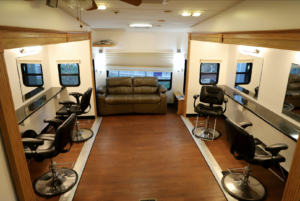 With running water, four barbering stations, heat, air conditioning, a refrigerator, electricity and a working bathroom, it is safe to say this is no ordinary trailer, and Burbank beams with pride as he recalls conquering this project with his own two hands.

With the physical labor done, the real planning began. After narrowing down lengthy lists of names and having contenders shot down by others, Burbank finally settled on the official name “Burbank’s Mobile Barber Shop, LLC.” His main marketing strategy has been word-of-mouth, but he plans on pushing his marketing leading up to his opening day, including tabling on campus.

Contrary to his expectations, the most challenging experience Burbank has faced has been finding and hiring exceptional employees. Having never cut hair himself, Burbank has a particular interview process, having the applicant cut his own hair or that of his friend. Unfortunately, of the 25 applicants, only three will make the cut.

“I hate to say it, but we come from a very entitled generation where sometimes people don’t always understand that you need to show up to work on time and don’t always understand that you’ve got to put work in to get things back,” Burbank said. “It’s taken an emotional toll on me in just that it’s not the thing I want to be doing. The thing I want to be doing is making a lot of forward progress and meeting people and talking to people and being in the barber shop and really working with people, not so much doing interview after interview.”

Burbank has finally set a date for his opening day at Quinnipiac. On Oct. 2, Bobcats can finally experience the unique service of Burbank’s Mobile Barber Shop. He plans on opening it in Hilltop parking lot.

Despite any pitfalls he may have encountered, Burbank anxiously awaits the day that his business will officially get off the ground and on campus, and the Quinnipiac population feels the same way.

“I already have people coming up to me saying, ‘Hey, I heard about this, when can I get my hair cut?’” Burbank said.