Quinnipiac rugby comes from behind to defeat Penn State 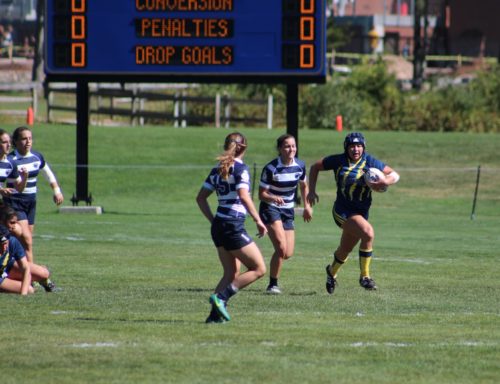 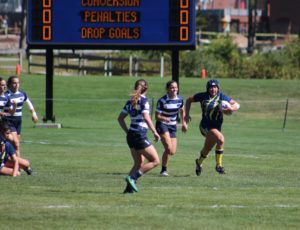 Despite the personal effort, Haight was just as pleased with her team’s impressive performance on Saturday.

“We can really play against teams like [Penn State], that are leaders on the club scene,” Haight said. “It’s good to prove to ourselves and to the rest of the rugby community that we are really are the best team in rugby right now.”

Quinnipiac and Penn State last met almost a year ago, on Nov. 5, 2016, in which the Bobcats finished its final regular season game as victors, beating the Nittany Lions 41-22. The game propelled the team into the playoffs, as it eventually went on to win the NIRA Championship against Central Washington University.

This time the Nittany Lions came out strong, as forward Azniv Nalbandian put the first points on the board within the first four minutes of play. Quinnipiac promptly answered back five minutes afterwards as Haight sprinted past the right side of the try line to tie the score at 5-5.

It marked the first time of three different occasions throughout the game where the teams were even on the scoreboard.

The rest of the first half did not go in Quinnipiac’s favor as Penn State stringed together three consecutive tries. The 10th point for the Lions came at the 23rd minute after a second push out of a scrum.

The next try for Penn State occurred with 10 minutes to play in the first half as forward Alexis Weisser rushed past the try line. Penn State went up 15-5 off of Weisser’s score. Nearing just five minutes to go in the half, Penn State broke through the Bobcat defense again for a 20-5 lead.

The Lions came into the game previously outscoring their opponents in their last two matches 167-10, but Quinnipiac had no such intentions of becoming a similar statistic.

As the Bobcats and the first half were fading, senior Ilona Maher brought some energy back to the Bobcats by scoring a drought ending try. Maher’s score made it 20-10 going into halftime.

For the Bobcats, it was a second half surge which separated them from Penn State and Haight was proud of her teammate’s commitment to winning.

“Towards the end [of the second half], that’s when we knew it was go-time,” Haight said. “We decided right then and there that that was the last time in the game that [Penn State] was going to be up.”

Two minutes into the second half, a display of teamwork and passing, brought the ball all the way from the Bobcats’ own goal line to Penn State’s try line for a resounding tally by Rebecca Haight.

Haight had her second try of the match to help the Bobcats claw back, as they only trailed 20-15.

Quinnipiac broke through again in the 10th minute of the second half. Graduate student Taylor Schussler drove in the try and ultimately tied up the game again at 20.  However, a successful conversion by Quinnipiac gave the Bobcats a 22-20 lead and their first lead of the game.

But the Lions would not give up easily. Soon after Quinnipiac took the lead 22-20, Penn State back Kayla Canett slid through the try line and then consequently hit a conversion to go up 27-22 with about 20 minutes left in regulation time.

It was the last time Penn State scored in the hard-fought game.

As the clock wore down, Quinnipiac began to show some edge and find its stride. The Bobcats tied the game up at 27 with seven minutes remaining. This time Maher ran the ball cross the try line for the score.

Another conversion from senior Margaret Wesolowski gave the Bobcats a slight lead at 29-22.

The moment of the match came with just five minutes to go when Quinnipiac’s junior Emily Roskopf ran full speed, broke away from the pack and scored the clutch try. This score brought the lead to 34-27 and a third conversion in a row brought the game to its final form, 36-27. 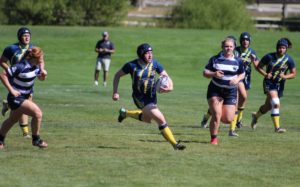 “We’ve been working on [conversion kicking] in practice and you know what is interesting, is that when we practiced this week, [Wesolowski] was hitting them non-stop,” Carlson said. “I said to her, ‘I want you to know that it’s possible that there could be times in the game where it comes down to a few points and you feel your heart rate escalate. When that has to happen, you need to be able to deliver.’ And she did it. If we hadn’t been able to score those tries we would have been at a two-point game basically.”

The Bobcats look to use this game as motivation as they continue their season.

“We’re a threat. A lot of people have been doubting us because we lost early on in the season to Dartmouth and [the team] has made it a commitment that they are going to answer back to that [loss],” Carlson said. “I think that statement [from this win] is we’re still a threat and we’re still on top.”

The Bobcats next matchup comes on Saturday, when they take on American International College, which they defeated 44-0 last season.