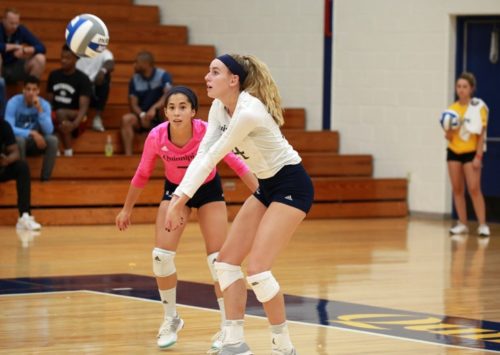 In its first game playing back at home, the Quinnipiac women’s volleyball team defeated the winless Saint Peter’s Peacocks on Saturday afternoon, improving to 2-1 in MAAC play and 3-13 overall.

“Any win we get right now is going to be huge for us,” Quinnipiac head coach Kris Czaplinski said. “We had a tough schedule in the beginning, but it was for the benefit of going into MAAC play. We knew that we were never going to face team in the MAAC like we did in our preseason schedule, so anything we can do in the MAAC as far as a win is always good.” 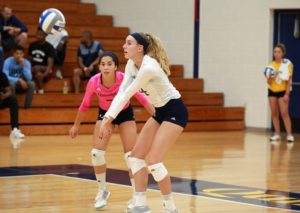 [/media-credit]It was a close matchup from the start as both teams traded points through much of the first set. After tying the set up at 15, the Bobcats found some much-needed momentum and scored 10 straight points to take the first set 25-15.

Junior outside hitter Jen Coffey led the team with six kills and two blocks as the Bobcats headed into the second second looking as confident as ever.

The Bobcats took the second set by the score of 25-12, taking a commanding two-set lead.

“We had been in the situation before where we were up two games and the team came back and won in five,” Czaplinski said. “We had to make sure we reminded them and that no team will ever surrender playing Division I volleyball.”

Quinnipiac continued to dominate as the team went on an 8-2 run to open the third set. Although the Peacocks put up a fight, the Bobcats wrapped things up in Hamden, as the team took the third set 25-14.

The win gives the Bobcats some much-needed momentum as they will stay in Hamden to host Rider (6-7) tomorrow at 1 p.m.