In a rematch of last year’s MAAC Semifinals, the Quinnipiac women’s soccer team (5-4 overall, 2-0 conference) beat the Siena Saints (4-5 overall, 0-2 conference) by a score of 2-1 in overtime. 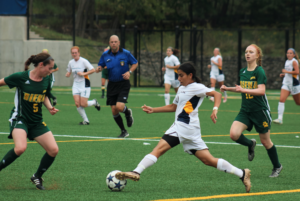 [/media-credit]With the win, the Bobcats improve their home record to 3-1. Quinnipiac head coach Dave Clarke commended his team for the extended effort through the game’s extra frame.

“This is our fourth overtime game this season and we lost one of them on not doing what we needed to do,” Clarke said. “In the second half, we stayed relaxed, we were able to push the ball up more and it lead us to the victory.”

Siena scored at 22:43 at the first half, but at 46:05 (in the first half), Quinnipiac redshirt senior Laura Nicholas scored her first goal of the season for the Bobcats.

Nicholas, who was not able to play last year, described her feelings on how much this means to her.

“It’s great to get your first your goal,” Nicholas said. “It adds more confidence to my game and when it gets the team behind you and leads to a win, then it’s even greater.”

Nicholas’ play has also opened the eyes of her coach.

“Laura had a good game today,” Clarke said. “when we are able to keep her fresh and she can give us those extras 10 minutes, that’s when she’s at her best.” 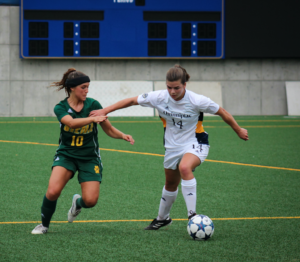 [/media-credit]In the second half, the two teams had their opportunities, but were both able to keep each other off the board until the end of the half.

About two minutes into overtime junior Nadya Gill found herself with the ball, made a quick move and found the back of the net.

Gill now leads the MAAC in goals (9), assists (7), shots on goal (23) and points (25) this season. She is on a five-game point streak (19) and has scored a combined four goals in Quinnipiac’s last two games.

“I got the ball, took it a touch past the defender and got a shot off,” Gill said. “It can definitely be a lot of pressure when your teammates are expecting you to score, but when you do score it all goes away.”

A big part of the Bobcats’ defensive game was the play from sophomore goalkeeper Olivia Myszewski, as she faced five shots on goal stopped four of them.

“Even though the better chances of the game came in the first half, she did what she needed to do to keep us in the game,” Clarke said.

On Saturday, the Bobcats will play at Marist in an important conference game. Both teams are 2-0 in MAAC play and have five wins and four losses on the season.