Pep band steps up its game 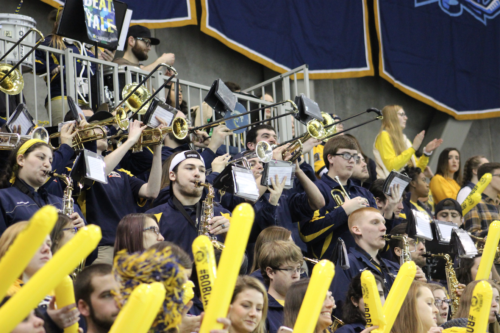 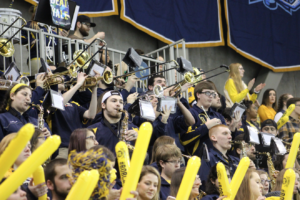 [/media-credit]This year, the Quinnipiac Pep Band established major changes to the program, geared toward improving the experience for members and the audience.

Co-captain Kimberly Addon explained that the new audition process is becoming more serious and is changing the Pep Band at a compositional level.

The audition process last year was a casual seating audition run by section leaders, according to Addon.

However, she explained that this year Quinnipiac Athletics is limiting the number of seats Pep Band has at the men’s ice hockey games to make more room for more student tickets.

“We had to hold auditions and figure out what our strongest band would be, and we said that we’re calling that band the Bobcat Band,” Addon said.

She explained that the Bobcat Band will be made up of 30 musicians, and they will play at all the men’s hockey games.

However, the Bobcat Band and Pep Band are not very separate, Addon said.

“Pep Bands ideology has always been that we accept everyone,” Addon said. “There’s no one that we’re saying ‘You’re not in Pep Band.’ Everyone is getting into the pep band. We just have to limit the number of seats at the men’s hockey games.”

Joining the Bobcat Band is a big commitment, Addon explained.

Junior Scott DeBell has been a part of Pep Band for three years and explained that the Bobcat Band is similar to an honor band.

“It takes the best players and puts them together in order to play at a higher level,” DeBell said.

According to Miranda Davis, the director of the Pep Band for seven years, the new audition process requires the musicians to come prepared with a piece of music of their choice and be able to sight read a piece of music that is provided at the audition. 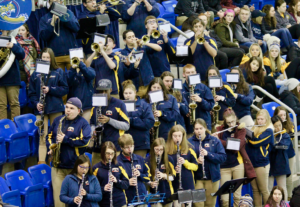 [/media-credit]Davis explained that the new audition process is similar to collegiate-style auditions, and musicians are judged on a one-five point system based on how well they perform the song as well as their tone, pitch and scale.

Also new this year, auditions will be held each semester instead of once a year, to give students another chance to audition for the Bobcat Band or join Pep Band, Addon explained.

As the Pep Band continues to grow, there is a lot of pressure to improve each year, according to Addon.

“Athletics is expecting a lot more from us, because they’ve seen how much we’ve grown,” Addon said. “Which is really exciting from an organizational standpoint. Three years ago the band was only made up of 20 kids and we now have 60 kids on the roster, so we’ve actually tripled in size.”

Nicholas Sczerbinski, the assistant director of marketing and fan engagement for Quinnipiac Athletics, said the growth and direction of the Pep Band has been incredible over the last few years.

“The Bobcat Band is an initiative of the QU Pep Band that we believe will create a healthy competition within the group and ultimately help to continue to elevate the band and their presence at games,” Sczerbinski said in an email.

The Pep Band is also working on incorporating newer songs that people would recognize into their repertoire and a marching routine for basketball games.

Another big change happening this year is that the band is going paperless, Addon said.

“We went with the Quinnipiac tradition of going green,” Davis said. 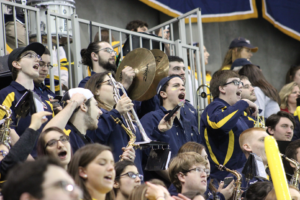 [/media-credit]Davis explained that instead of printing out sheet music on paper and making binders, everyone in Pep Band is going to have a tablet that contains all of their music.

“It’s going to be a lot easier to transition between songs because we won’t have to fumble through pages, which will help us play better,” DeBell said.

“Band was always a really big part of me,” Addon said. “This Pep Band is where I found my place on campus. Being able to find those other who have shared the same experiences has been really awesome.”