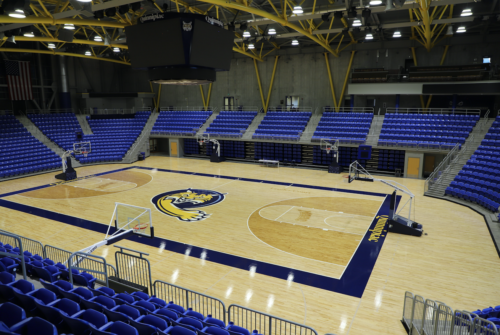 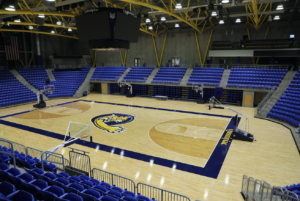 [/media-credit]The TD Bank Sports Center has been an essential part of Quinnipiac Athletics for the past 10 years. Since its opening in 2007, the arena has hosted countless games for the men’s and women’s teams it houses, along with events such as the Wake the Giant concert in the spring.

The 10-year contract that TD Bank signed with Quinnipiac when the center opened ended as of June 30, 2017 and was not chosen to be renewed, according to Vice President for Development and Alumni Affairs Donald Weinbach.

This puts the school in a state of limbo as the sports center that previously adorned TD Bank logos that adorned the court and ice rink, leaving only the gold “TD Bank Sports Center” signage branding the front of the stadium.

“For the past 14 months, we’ve been aggressively looking for either TD Bank to renew for another 10 years or for another corporate entity to put their name on the arenas,” Weinbach said. “We’re not quite there yet. We’re contemplating what we would do during the interim period.”

Along with the loss of sponsorship for the entire stadium, High Point Solutions, which previously held naming rights to the hockey rink, no longer retains those rights. The company maintained a five-year contract with Quinnipiac that was renewed for one year, and ended simultaneously with the TD Bank contract.

Sophomore finance major Jake Gouveia has attended many events at the TD Bank Sports Center throughout his past year at Quinnipiac. An avid college hockey fan, he believes the change in naming of the various arenas will affect the association people have with the different teams.

“It’s interesting because of the fact that each team with their stadium name is kind of their signature,” Gouveia said. “ Most of the time, if they change the name or sponsor of the stadium, it’s because of a new stadium. But it is also pretty cool because for the time being, it opens up the opportunity for anyone to take it and could be a great investment.”

The basketball and hockey arenas both sustain separate names from the overall center which Quinnipiac plans to continue for the next sponsorships to come, whether they be corporations or individuals.

“The hockey arena is going to be named on Nov. 4. We’re having a dedication – it will be named in honor of Frank Perrotti, who was a neighbor, friend and benefactor of Quinnipiac University, who was probably the loyalest hockey fan that we’ve had,” Weinbach said. “That will be a very moving dedication in November during alumni weekend.”

Although the hockey arena will be named after Frank Perrotti, the basketball arena is still in search of a sponsor, along with the two new turf stadiums on the Mount Carmel campus. These will be dedicated on Sept. 25.

Michelle Damelio, junior cheerleader for the men and women’s basketball team, has been cheering at the basketball center, Lender Court, for the past two years. As the entire stadium plans to take on new names, Damelio expressed that she didn’t believe the loss of sponsorship would be that significant for students or athletes alike.

“I’ve always cheered with the center being called TD, so it’s going to be weird possibly calling it something else,” Damelio said. “It doesn’t affect me personally, but it would be an odd change for everyone.”

Weinbach said the university is already pursuing some companies and individuals to put their names on the field hockey and soccer/lacrosse venues. 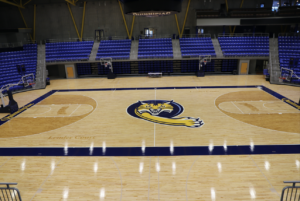 [/media-credit]He acknowledged that the school would not be opposed to a singular entity coming in and naming the stadium on York Hill along with the two new turf fields on the Mount Carmel campus.

Laynie Barrentine, a Quinnipiac alum, was very upset by the news of TD Bank’s failure to renew its sponsorship with the school. Having attended many ice hockey games, along with all four Yale games during her time as a student, the stadium, along with its title, still evoke memories tied to her college experience.

“My entire collegiate career was spent at TD Bank for hockey games, and personally, I could never imagine another sponsor than TD,” Barrentine said. “It’s definitely sad, especially from an alumni prospective, when major things change at your university. Change isn’t always a bad thing though, so I’m curious to see how this will impact the university as a whole.”

Although Quinnipiac is in search of various sponsors for their many sporting arenas, Weinbach ensured that the prospect period in which the arena does not have a sponsor will not affect the school financially. If and when the university should decide on the proper sponsor, Quinnipiac intends to put the money towards academics.

“Unlike most… probably every university in the country, we will be taking the money for the sponsorship of the center and funding the academic programs with it,” Weinbach said. “We work with (sponsors) and try to match what their priorities are. Most any company will have a philanthropic mission to support various programs.”

A new sponsorship does not mean any plan for renovation, according to Weinbach.

“It’s only 10 years old and it’s a real credit to our facilities people… it looks brand new every time you walk into it,” Weinbach said. “There are possible enhancements in the future that Athletic Director Greg Amodio may have in mind depending on who comes in and when they come in with a big dollar amount, then we’ll take a look at the priorities.”

The TD Bank ATMs located in the student center and in Perlroth residence hall will remain a part of the campus despite the removal of the company’s name from the sports center. The concerns of actual banking on campus addresses a separate business transaction.

“I’d imagine that if a bank comes in and wants to put their name on the sports center for 10 years and has a banking relationship with the university that we may see a change,” Weinbach said. “For now, again, we’re kind of in flux just kind of taking it slow and making sure we’re doing things right.”