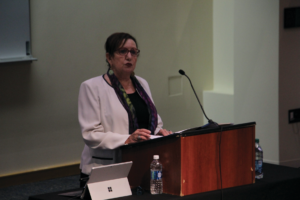 Benhabib devoted her time towards ardently discussing her reflections on Hannah Arendt’s “The Right to have Rights,” with a particular interest on migrants and refugees in political thought.

The lecture began with quick introductions by Professor Robert A. Smart, the Dean of the College of Arts and Sciences, and Professor Scott L. McLean, a political science professor and department chair.

In his introductory remarks, McLean described Benhabib’s as “a world-class scholar.” McLean said that having Benhabib at Quinnipiac is vital to challenging perspectives and increasing understanding of issues currently going on in the world.

Benhabib began her lecture defining a refugee. A refugee is considered an alien body and enemy by multiple countries, according to Benhabib. In addition, one in 113 people in the world are currently displaced.

She also touched upon the issue of ‘crimmigration,’ where criminal law and immigration intersect and tear families apart through deportations.

After discussing the main focus within her introduction, Benhabib transitioned into her lectures key figure: Hannah Arendt.

A political philosopher and theorist, Arendt was born in Hanover, Germany in 1906. As her life progressed, she studied with several philosophers, including Martin Heidegger and Karl Jaspers. Benhabib used several works of Arendt’s in order to fully discuss Migrants and Refugees.

Emily Szamocki, a political science major and Middle Eastern studies minor, was particularly intrigued with the layout of the lecture.

“It was really interesting how she tackled that topic by using different documents to justify her points,” Szamocki said.

Benhabib used a PowerPoint presentation to show photos of Arendt, while she relied on her own notes and a piece of paper, which was given out to the entire audience, containing several key quotes which she interpreted throughout the lecture.

It may be true that human history shows us how rights have evolved, but Benhabib was skeptical of that idea. She claimed that history has shown us Communism and the ideology of Karl Marx, where humans are turned into instruments. Humans become equal once again by establishing new institutions. However, Benhabib completed this claim by saying that there is always some degree of exclusion. There will always be a we-versus-they situation.

People are being deprived of the freedom to act, according to Benhabib. As states deny rights to refugees and migrants, these people become worldless and stateless. Benhabib then went on to argue that while this issue is a double-edged sword, the individual person matters and there is a humanitarian reason involved.

President Lahey was in attendance and enjoyed the discussion.

“The timeliness of this event could not have been better with DACA being in the news,” Lahey said. “I enjoyed her ability to bring in different thought as well. Even though I came in a bit late, it seemed like the lecture had the best attendance so I am pleased.”

Benhabib urged the audience to think of the women and children who are in most dire need of housing in refugee camps. Women in these camps are subject to assault, prostitution and abuse from male refugees.

Benhabib made clear throughout this lecture that rights have different aspects when it comes to society and humanity as a whole. Benhabib claimed that it was ridiculous that President Donald Trump would support lowering taking in refugees from the Middle East when they are carefully and rigorously vetted.

Benhabib concluded her lecture by posing the rhetorical question, “What do we owe?” Her response was that we all embrace a shared humanity with one another. It is, ultimately, time to ensure the safety and protection of others.

“Some of the topics we talked about – like people who may become stateless in the future as an impact of DACA – that’s something I have talked about a lot with my residents,” Chase said. “I really thought it was a great choice of a speaker.”