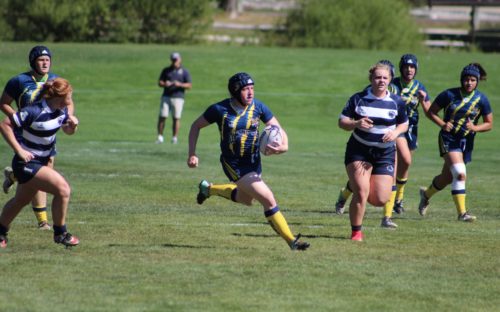 The Quinnipiac women’s rugby team defeated Norwich University 52-7 in its second home game in two years, on Saturday. Senior Margaret Wesolowski and freshman Layla Scott led the way for the Bobcats, as they were able to improve their record to 2-1 on the season.

Scott scored three tries while Wesolowski and senior Ilona Maher both recorded two tries of their own. Senior Flora Poole but led the team with three assist and notched one try as well.

The team knew just how crucial this win was, coming off its first loss since Oct. 15, 2016, against Dartmouth last week.

“It showed how we can come back from a loss and how we can improve from one,” Scott said.

The game started off well for the Bobcats, as they converted three of the game’s first four tries and took a commanding 20-7 into the half. However, in the second half, the Bobcats came out even stronger.

Quinnipiac converted on three tries in the first 10 minutes of the half, extending its lead by 17 points. Afterwards, the Bobcats converted on three more tries and remained strong defensively, as they held Norwich scoreless for the rest of the game.

“Well, everything that we’ve been working on in practice finally came together.” said Quinnipiac head coach Becky Carlson. “We trust the system and it shows that we have weapons all over the field.”

Most Quinnipiac players on the team ended the day with points on the stat sheet, while four players had more than one point during this game. There were six different Bobcats that recorded a try in the match.

The Bobcats have the entire week to get ready for their next match. On Saturday Sept. 23, they welcome the Penn State Nittany Lions to Hamden for their next showdown.