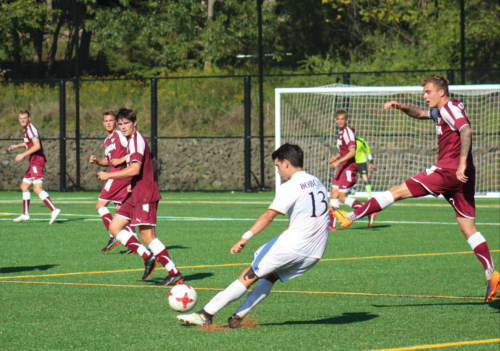 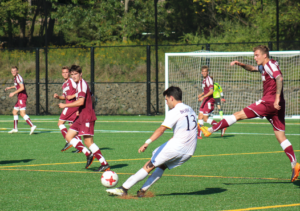 [/media-credit]The Quinnipiac men’s soccer team was unable to capture its second win of the year on Saturday, as it lost to Fordham 1-0.  The lone goal was scored by Fordham’s Janos Loebe in the 67th minute of play.

The loss drops the Bobcats to 1-4-1 on the season, while Fordham improves to 4-2-1.  The Bobcats have been shut out in all four of their losses this season, and have amassed just two goals over their first six games.

Loebe’s goal came off an assist from freshman midfielder Ross Willox after the Bobcats gave the ball away at midfield.

“It was a mental lapse,” junior midfielder Colton Grob said. “It was a quick counter and they took advantage of it, that was the difference between them and us.”

The Bobcats were outshot three to one in the first half, but turned it around in the second half, controlling time of possession and getting five shots off to Fordham’s four.

“It’s extremely frustrating to train and put in a performance like that in the second half and not get the result,” graduate midfielder James Doig said. “But once again, that’s football.”

Quinnipiac’s best chance to score came with just under 38 minutes to play in the second half. Junior forward Rashawn Dally slipped free for a shot, but Fordham’s Rashid Nuhu made the save.

However, the Bobcats’ offense, or lack thereof remains the biggest concern.

Da Costa referenced Dally’s struggles holding the ball as a reason for the lack of offense.

“It’s like throwing a ball into a center and he can’t catch,” Da Costa said. “You might as well keep throwing up threes and hope they go in.”

As for the early season struggles, Doig feels the focus shouldn’t all be on one side of the ball.

“I think we should focus more on stopping the other team from scoring,” he said. “I think that’s our main objective and then we can go on from there.”

“[Pustari] and [Whelan] give us what we need and we certainly miss them,” Da Costa said.

Da Costa added that he believes the long layoff between games will be good for their chances to play next Saturday against New Hampshire.

As for the 1-0 loss today, Doig is already looking forward to the next time out.

“We have a week off, and then we play New Hampshire at home, then there’s conference play,” Doig said. “We don’t have time to be upset and pity ourselves.”