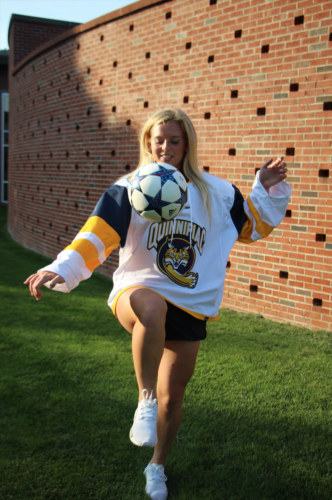 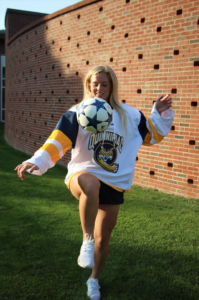 [/media-credit]Most athletes will tell you that the feel of turf is noticeably warmer than that of a grass field. It is a minor adjustment that the women’s soccer team had to make heading into the 2017 season, its first in the brand new Quinnipiac Turf Complex.

For graduate student defenseman Emma Greco, the climate change was much more drastic as she shifted from the cool sheet of ice at High Point Solutions Arena to the warmth of the fresh turf.

Some would see it as a climate shock. For Greco, it is more like seeing an old friend.

Before her four years of college hockey, in which she played in 144 career games for the Bobcats (good for 10th most in program history), Greco was as prolific with a soccer ball as she was with a hockey stick. Sure, she represented Ontario in the National U18 Hockey Championships in 2012 en route to a bronze medal, but she also led the Burlington Heat to the U17 soccer finals a year earlier while playing in an age group above her own.

It would be her last time putting on a soccer uniform, at least until a fellow Bobcat helped pave the way for Greco to make a triumphant return to the pitch.

“My former teammate Kelly Babstock played four years of hockey and then played lacrosse,” Greco recalls. “I kind of joked around with my family about doing what she did and playing soccer, but it ended up being a reality once I talked to (Quinnipiac women’s soccer head coach Dave) Clarke and tried out.”

It may not have been a serious consideration two years ago, but it is no laughing matter anymore.

Following Babstock’s lead, Greco is writing a unique epilogue for her final season at Quinnipiac by shaking off the dust on her soccer cleats. With little time to readjust to the intricacies of her once-forgotten sport, Greco managed to earn her way into the starting lineup in just the third game of the year, anchoring the defense and leading the Bobcats to their first win on their new turf in a 2-0 shutout against Army. She has already logged over 200 minutes through the team’s first three games of the young season.

Greco may have made it look like an easy transition, but nothing came handed to her.

“She’s had to earn it,” Clarke said. “It took her awhile to get going, but the way she’s trained, played and carried herself, she’s won everybody over.”

Clarke welcomed Greco to spring workouts earlier this year and saw a phenomenal athlete who was struggling to rediscover her groove in a sport she had abandoned long ago. Turns out, she just needed to dial up the competition.

Whatever Clarke wasn’t seeing in practice, it smacked him in the face when he put Greco up against one of the best teams in the nation in a preseason scrimmage.

“The time where the staff and I shifted is when we saw her against Georgetown,” Clarke said. “She handled their starting forwards, and we had to take a step back and say ‘If she can play against a top-four team in the country, then she can play.’ You could see the soccer savvy coming back. You could see there was a player there.”

Of course, her successful transition comes as no surprise to those who watched her compete for four years on the ice.

“Emma doesn’t want to ever lose a battle,” Quinnipiac women’s ice hockey head coach Cass Turner said. “She takes it personally and has a ton of pride in being able to have possession. I see that in soccer when I see her play. It’s fun to watch her (on the soccer field) because it all makes so much sense. She has a similar skillset in soccer as she does in hockey.” 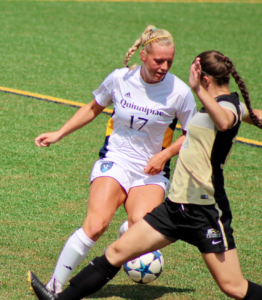 [/media-credit]Turner has had some company in the stands, as Greco’s former teammates have shown up to support their friend and teammate. Like their coach, nobody has been surprised with Greco’s ability to get back in the swing of things after a four-year hiatus.

“When I went to her soccer game, she played the whole game with a lot of energy,” women’s ice hockey junior captain Melissa Samoskevich said. “It was cool to see her transfer that from hockey to soccer in just a year. She’s definitely a natural athlete.”

Greco’s current defensive partner on the soccer field echoes the sentiment of her former teammate on the ice.

“She’s really good,” sophomore defender Kylie Lance said about her new teammate. “So tough, so fast, so competitive. You would have no idea that she hadn’t played in four years.”

Her hockey teammates were also dumbfounded by Greco’s skills when the ice skates were off and began helping her practice for her next chapter as soon as the hockey season came to a close.

“Honestly, I didn’t know that she played soccer,” Samoskevich said. “When she said she was trying out for soccer, I said ‘What are you doing?’ The fact that I didn’t know she played and she’s that good shows a lot about her. She’s very humble.”

Greco fidgets about and avoids eye contact when being forced to talk about her own success. Every past and present triumph is presented with a tone of humble awkwardness.

Her eyes consistently wander across campus towards the turf complex, where she prefers to let her play speak for itself. Put her on the playing field where her game can do the talking instead of her words, and things suddenly look overwhelmingly natural. She refuses to take any credit as her own, instead paying homage to the sport she called home for four years.

“Hockey has really prepared me to play a Division-I sport,” Greco says. “I never came into soccer expecting anything or expecting to play right away, but it’s great. I never would have thought this if you told me last year. I just kept working hard, and hoped my time would come.”

“She protects her goalkeeper,” Clarke raved. “In hockey, that’s the first thing…any time the goalkeeper goes down, the defender protects them. It goes unnoticed by some players, but the coaching staff notices that.” 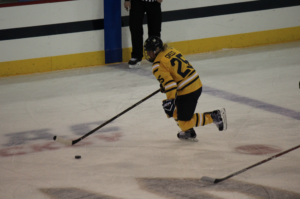 [/media-credit]Clarke reminds Greco that she is in the one percent of athletes who have been able to experience Division-I competition through multiple sports lenses. For Greco, being in the one percent means giving 100 percent and letting her natural abilities take over.

Natural athlete is just one of many ways to describe Greco. She has now played soccer and hockey at the collegiate level after joining the club team for softball, volleyball, basketball and even badminton during her high school days in Ontario, Canada.

Greco has the resume of an athlete filled with as much wonder as she has skill, anxiously trying anything she can to find a new style of competition.

“She loves being active,” Turner said. “She has a lot of interests. Wherever she goes, she has an influence on the culture to help the team succeed.”

While Greco is influencing the culture in the locker room, she is absorbing the culture around her that comes with being a part of a team, no matter what the sport.

“I just love the competitiveness,” Greco says of her love for any and all sports. “You’re guaranteed 25 best friends. I met so many great people on the hockey team that will be at my wedding and will be my best friends for life. Now I have even more best friends. I love being part of a team. I love working with each other and for each other.”

For Greco, she enjoys competing nowadays with her 25 new best friends while her old best friends chant her name from the stands. No matter where she goes, people want to cheer her on. Probably because they know they’re cheering for a proven winner who seems to succeed at anything she tries.

Who knows, maybe Bobcat nation will see her on the softball diamond this spring.