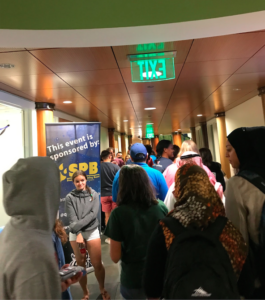 [/media-credit]On Friday, Sept. 8, Quinnipiac University’s Student Programming Board (SPB) ran the annual Psychic Fair Event. This year, the traditional event consisted of readings given by seven psychics, a Do it Yourself air freshener station, a snack table full of donuts, cookies, drinks and cupcakes, music and a balloonist.

According to SPB’s President Miranda Zygmunt, “This event is one of the biggest that SPB runs and gets a lot of turnout from the Quinnipiac community.”

This is the reason why SPB’s Traditions and Community chair, Bella Zaccardi, decided to run the event again this year and was busy throughout the night making sure the event was run smoothly.

The event started at 8 p.m. and just 15 minutes later, SPB gave out over 140 tickets to students who wanted to see the psychics. This made the wait over an hour right at the start of the event and students were standing in a line that wrapped around the Piazza. SPB board members were on the microphone calling out the ticket numbers to those who were up next to see the psychics.

Students who were waiting for a reading made themselves busy with the other activities SPB offered and got more excited to see what the psychics had in store for them. Each psychic reading was about five minutes long and SPB encouraged students to go in groups so everyone who wanted to get a reading had the opportunity to meet the psychics.

According to Zygmunt, last year SPB did not use the ticket system and only had six psychics giving readings.

“Utilizing the ticket system this year, it made the event go a lot smoother and a lot less crazy,” Zygmunt said.

SPB also upped the number of psychics from six to seven because of how popular the event is here at Quinnipiac to ensure even more students were able to experience this event.

Freshmen Josie Buckley and Allison Zilberfarb waited in the long line for the psychics.

“We’re excited and anxious to see what the psychics have to say,” Zilberfarb said.

After getting readings, students had a mixture of emotions. They were either blown away by the psychics, freaked out or excited. Nicole Gibson is a freshman who had her very first reading at this event and enjoyed the  eventual outcome.

She then stated that the psychic predicted that she was going to lose a lot of money and that she, as a person, is determined to get whatever she wants. It seemed as if the psychics went into depth, despite the fact that they had to give lots of different Quinnipiac students readings throughout the night.

Freshman Samantha Sheehy was also excited about her psychic reading.

“I decided to go in [to the reading] with two other friends,” Sheehy said. “The psychic had us each pick three cards, each representing something about ourselves. For me, she said she could see me dancing or cheerleading, two past hobbies of mine. She also said that she could feel me struggling with taking on too much work and that sophomore year would be easy for me. She also had some funny things to say to me and my friends! Overall it was a fun night and I’m looking forward to more events from the SPB.”

This event is extremely popular because even at 9 p.m., students were still coming to the Piazza to check out the psychics. Both aspects of this event were a hit and students are excited to see what else SPB has in store for Quinnipiac University in the days and weeks to come.