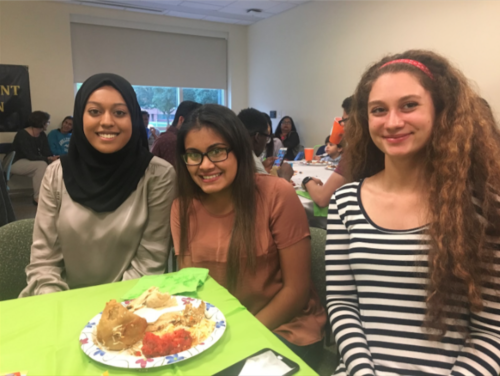 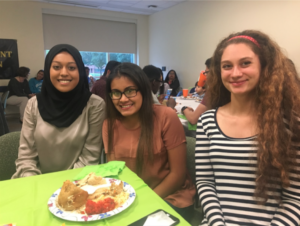 By Alexis Guerra and Hannah Tebo

“Human Rights in Islam.” “Saudi Women.” “Who is Jesus?” “Saudi Arts and Crafts.”

These are just a few of the pamphlets that lay on the lime green table cloth. Laying around the pamphlets are jolly ranchers and decorative glitter stars.

To an outsider passing by SC120 on Friday Sept. 9, it would just look like a room full of friends hanging out. While this is true, because most of the members have known each other from years of Sunday school, a deeper and more meaningful celebration is occurring. Every year, the Muslim Student Association celebrates Eid al-Adha and encourages people of all faiths to attend the celebration.

Eid al-Adha, meaning the “Feast of Sacrifice” is the religious celebration of Ibrahim’s willingness to sacrifice his beloved son, Isaac, to fulfill Allah’s wishes. Traditionally celebrated, members of the Islam community sacrifice goats and cows in remembrance of Ibrahim’s devotion to Allah.

“Eid Mubarak!” President of the Muslim Student Association Ali Munshi said as he welcomed everyone to the annual Eid dinner.

“All of us being in a room together is a testament of the people that have come before us and after us.”

The celebration continues with a local preacher directing the attention of the members on the importance of the holiday.

When asked what it meant to gather as a community to celebrate Eid, freshman Irsa Awan, a new member of the Muslim Student Association, reflected deeply upon the question.

“Since it was my first year of attending this event it really made me feel welcomed and it was great to see people from different religions come celebrate with us and get to learn about this holiday,” Awan said. “I’m glad that there are events like this to bring everyone together to enjoy free food, meet new people and learn something new.”

This club has continued to gain recognition in the past few years. According to Munshi, the Muslim Student Association has grown over the past three years and the turnout for this event reflected the devotion the members have to the community. This enthusiasm and effort earned the Muslim Student Association the student organization of the year in 2016.

After a local preacher said a few words commemorating the holiday, Munshi added his own take.

“We are celebrating the mercy and blessing God bestows on to us everyday,” Munshi said before encouraging the members to dig into the delicious food.

Traditional foods of the holiday include biryani, (rice and chicken mixed with Middle Eastern spices), samosa (a fried dough with potato filling), tandoori, (chicken with spices), naan, falafels and hummus. Each food is geographically diverse with origins in Pakistan, India and China.

This time of celebration put into perspective the importance of community. The cultural traditions that were celebrated promoted an atmosphere of unity and love. Ali Munshi displayed his love for the Muslim Student Association and the people attending by making each person feel welcomed and accepted. The members devotion to club was emphasized in the fun and flawless celebration of Eid al-Adha.

This celebration honored the customs annually practiced by the members of the Islamic faith and created an awareness of Islam in the Quinnipiac community.