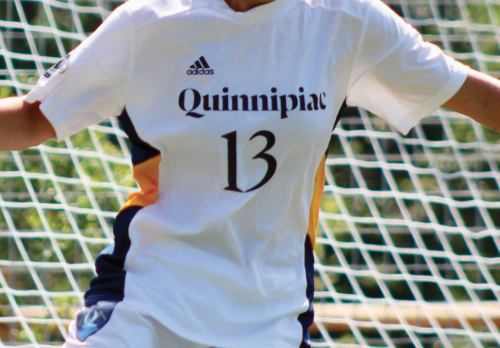 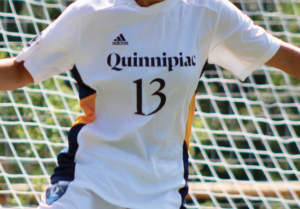 [/media-credit]Quinnipiac and its athletics have taken back-to-school clothing to another level, using their new apparel to turn students and student-athletes into walking billboards.

After announcing a seven-year partnership with adidas on March 31, the university has overhauled its clothing with the new company. The adidas logo is evident on sweatshirts and jerseys, but it’s not the most prominent logo across campus. Instead, Quinnipiac is using its new apparel and other departments as a space to flaunt its new “Q” and build that as its brand.

After last year’s lowercase “u” debacle, the university landed on its current logo. The “Q” and adidas logo are featured on clothing for residential life, admissions and other university entities, including athletics uniforms.

While the combination works for some academic and administrative purposes, it seems misplaced on the field. Most of the uniforms look like something a “Silicon Valley” rival would wear against the Pied Piper guys in a corporate kickball match. The soccer teams’ new crest helps put them in the company of club and international soccer squads, but it still contains the off-putting “Q” that isn’t normally associated with uniforms. Quinnipiac has transformed student-athletes into glorified NASCARs, parading the new brand around like one of the school’s shiny new shuttles.

It all makes sense, though. Quinnipiac Athletics doesn’t represent a team; they represent a university, and the university is prioritizing its overall image over the chance at expanding its athletic look.

To this point, I have yet to mention the Quinnipiac Bobcats. While the university harps on the “#BobcatNation” mentality, it is hardly recognized across the 21 varsity teams’ uniforms. Some of the teams flaunt a Bobcat face on their warmups. Others, like the men’s soccer team, have “Bobcats” written across the back of their kits. Come game time, though, the “Q” is what’s front and center.

While the school’s ice hockey and basketball programs have not debuted their uniforms for the upcoming season yet, their images incorporate more of the Bobcats. This is done with marketing in mind, too.

Boomer has a presence at TD Bank Sports Center between hockey and basketball introductions and both sports draw local kids into the arena. Since a mascot presence benefits Quinnipiac as a branding tool on York Hill, the university will keep it up there.

TD Bank Sports Center is the one place where adidas will play a specific branding role. adidas was the official apparel partner of the National Basketball Association through last season and it will make its National Hockey League debut this season. By aligning with the pros, Quinnipiac is hoping that it could draw in a greater pool of recruits, which will lead to more winning and, inherently, a larger audience and income.

The university will not fully surrender the opportunity to flaunt its own brand at the York Hill arena, though. High Point Solutions Arena has the new Quinnipiac font plastered on the boards and Lender Court redesigned its baselines with the new typeface. The men’s basketball team has even repped the new “Quinnipiac” and “Q” on its practice jerseys over the summer, opting for the new image over conventional college basketball aesthetics.

Jerseys are an in-your-face indicator of the school’s agenda. In the grand scheme, though, the new uniforms are merely a microcosm of Quinnipiac’s greater exploitation of athletics as a branding platform.

Quinnipiac has used its facilities to build its programs, but has also erected these athletic hallmarks to draw attention beyond the Bobcats. The university spent $52 million to construct TD Bank Sports Center, which has been the home for the school’s basketball and ice hockey programs since 2007. The state-of-the-art facility has since hosted a Women’s Frozen Four and is set for another in 2019. The arena also held a high school basketball game last winter when Hillhouse and Notre Dame battled for the SCC championship on March 1. By comparison, Quinnipiac’s men’s basketball team only exceeded an audience of 2,000 twice all of last season and the women’s team reached a season-high crowd of 1,293.

The venue has helped the school’s teams make strides over the years, but TD Bank Sports Center has proven itself as an arena designed to bring people to Quinnipiac University, not Bobcats games.

The field hockey team made the move to the Big East in 2016, Quinnipiac’s first membership to such a well-recognized conference, and also has a brand new field to show off. The soccer and lacrosse teams have a new stadium of their own, too, which can open recruiting, realignment and expansion possibilities. Between the venues and recent successes across Quinnipiac Athletics, more teams could see positive conference realignment.

Even with recent success, the university is conceding that sports will not become Quinnipiac’s brand and has instead chose to use Athletics’ achievements as a platform to shine light on “Quinnipiac” and its image.

As improbable as the women’s basketball team’s NCAA tournament upsets were last March, its play on the court was a neglected element when it came to the biggest stories along the run. The Bobcats shocked Marquette and Miami, but the top news hits came in the form of an instructional ESPN video about “Quinnipiac’s” pronunciation and a podium appearance from UConn head coach Geno Auriemma, where he sported a Quinnipiac t-shirt and praised Tricia Fabbri’s squad. Both instances were ones where “Quinnipiac” was the story over the team and showed how the university’s name triumphs over athletic achievement.

The Bobcats’ play was mostly out of the picture, but the Cinderella run paid dividends in Quinnipiac publicity. The term “Quinnipiac” reached its highest Google popularity of the last five years between March 19-25, 2017, the day after beating Marquette up until the day of the team’s loss to eventual-champion South Carolina.

Quinnipiac is not alone in this practice of using athletics as marketing space. The NCAA remains a system that stands on the labor of student-athletes that don’t sniff a dime of the millions the NCAA brings in annually. Companies like AT&T and Coca-Cola have become as intertwined with March Madness as buzzer-beaters and poor clock management. In April of 2016, CBS and Turner agreed to an eight-year, $8.8 billion deal with the NCAA for TV, digital and marketing rights to the NCAA Division I Men’s Basketball Championship because of how enormous the commercial platform it is.

Quinnipiac isn’t relying on a national tournament appearance anytime soon, but it is preparing itself for when it gets television attention. The men’s hockey and basketball teams play a handful of games on SportsNet New York throughout the season to reach the tri-state area. When teams make their respective national tournaments, they even have a chance at appearing on ESPN. Instead of chasing after an overall athletic image on the national stage, Quinnipiac is opting with the “Q” to make an impression with their next chances.

Regardless of the Bobcats’ success, the school’s branding design will be right there for all eyes to see. By placing the “Q” across its athletic uniforms and venues, Quinnipiac is showing its determination to grow as a university and name more than an NCAA contender. The change comes as the institution’s largest incoming class makes its way to campus. With around 2,000 students reigning in the new design across campus and teams repping the logo on the field, the university is hoping that “Quinnipiac ice hockey,” “Quinnipiac Admissions” and “Quinnipiac University” can mold together and simply become “Quinnipiac.”

When push comes to shove, Quinnipiac is going for “Q” over W’s.