A conversation on Charlottesville 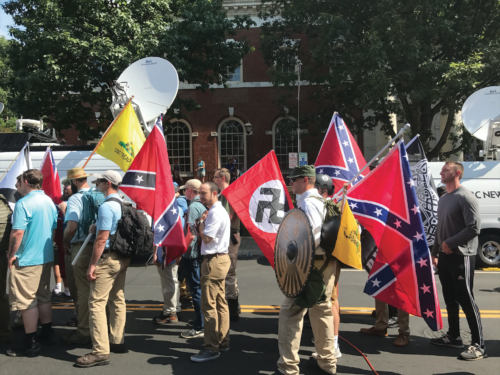 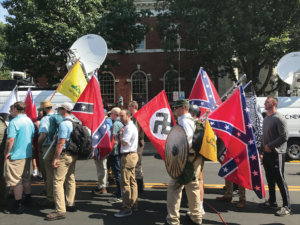 [/media-credit]On Tuesday, Sept. 5, Father Jordan Lenaghan, the executive director of university religious life at Quinnipiac, held a conversation about the Unite the Right rally and related events that occurred in Charlottesville, Virginia. The forum was hosted in the newly built Center for Religion, in the College of Arts and Sciences.

Lenaghan began the conversation by asking the audience of students, faculty and staff what their reactions were to the images they saw from Charlottesville during the protest.

“I have a job that involves words, and I didn’t have words for what I saw,” Lenaghan recounted. “Places and spaces that were meaningful to me, places of engagement for students… to see them desecrated the way that I did, it was like a gut punch.”

During the Charlottesville demonstration, protesters used signs, flags and torches to emphasize their position.

“I was struck by the fact that it was torches (used during the rally), which I think in terms of mentalities, we think of that as something that is destructive,” Lenaghan said during the conversation.

The acts displayed during the Unite the Right rally on Saturday, Aug. 12 were met with a candlelit vigil of peace on Wednesday, Aug. 16.

“(Counter-protesters) responded with candles,” Lenaghan said. “Which in our culture has this sort of symbol of hope, and of light, and of the fact that, against a lot of darkness, you stand together.”

After the events in Charlottesville, President Donald Trump addressed the nation about the events and public outcry that ensued.

“Many of those people were there to protest the taking down of the statue of Robert E. Lee,” Trump said. “So this week, it is Robert E. Lee. I noticed that Stonewall Jackson is coming down. I wonder, is it George Washington next week? And is it Thomas Jefferson the week after? You know, you really do have to ask yourself, where does it stop?”

During the protest, signs and hats read “Make America Great Again,” Trump’s election campaign slogan, which raised the question of what sort of greatness America is striving for.

Events like Charlottesville still takes place because people aren’t honest to the fact that racism and white supremacists still exist, according to sophomore advertising and integrated communications major, Sina Sidibe.

“The fact that Trump is even president speaks volumes that racism still exist,” Sidibe said. “As an African-American and a person who has Muslim friends, I feel hopeless.”

Bigotry in America seems to have surged under Trump, according to associate professor of English, Timothy Dansdill, who was a participant in the conversation.

“If I were a Jew, I would be offended. If I were a Christian, I would be offended,” Dansdill said. “As a thoughtful citizen seeking a greater diversity in our communities and understanding that bigotry shown out of no foothold (is not acceptable), although under Trump it seems that it has gotten worse and worse, that disturbed me profoundly.”

The question was posed during the conversation as to what possible solution there could be to prevent demonstrations like Charlottesville from occurring in the future.

As a unit, the audience and Father Jordan came to the conclusion that love should be used as a main force against the hate and bigotry shown in Charlottesville.

The conversation in the Center for Religion was a step in the right direction towards becoming more united as a nation, according to Sidibe.

“I think the conversation tonight was definitely a starting point,” Sidibe said. “It got intense. It got really intense, which I expected, but I think it’s starting to go somewhere. We’re always going to have those ignorant people on the side, but it’s definitely going somewhere and if we keep this up it will definitely go somewhere.”