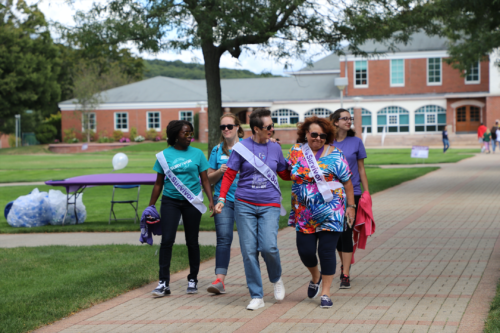 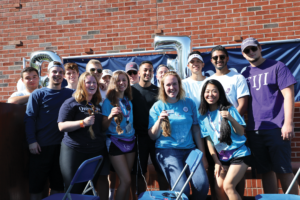 [/media-credit]This past  Saturday, Quinnipiac’s Mount Carmel campus bustled with activity while students and families gathered on the quad to participate in this year’s Relay for Life event.

Relay for Life is an eight-hour-long walk-a-thon sponsored by, and supporting, the American Cancer Society. Teams registered ahead of time and walked throughout the afternoon to show their support and dedication to finding a cure for cancer. Each member paid a $10 registration fee as an initial donation. Team members were encouraged to ask for additional contributions from friends and family in support of the team itself, and the American Cancer Society.

Saturday’s event raised over $27,000 in total and had over 400 participants. While this is by no means a small accomplishment, it does fall short of the 2009 Relay, when the QU community was able to raise a massive $115,000.

For many Quinnipiac students, 2017’s Relay for Life was an opportunity to support a worthy cause, and spend time outside with friends.

“I’m part of the team representing the Quinnipiac softball team,” senior health science major Miranda Magana said. “We always try to help out around campus with community service events, and as a team we wanted to contribute to Relay.”

For others, the day represented something much more personal.

Graziella Floriano, a 2001 alumnus of Quinnipiac, is the team leader of a group called “Mariana’s Love.” The group was named eponymously for Floriano’s cousin, a 1999 Quinnipiac College alumnus, who succumbed to Stage 4 bio-blastoma this past June at the age of 40. Mariana bravely fought this type of brain cancer for a year before leaving behind her husband and four children.

Now, Floriano is taking a tragic story and using it as fuel to power a mission to help others.

“We went to Quinnipiac together, and I thought, how great would it be to do our first Relay for Life at Quinnipiac,” Floriano said. “It was through community that we were able to do this. I thought this was just going to be a family thing, but more and more people started asking me ‘how can we help?’” 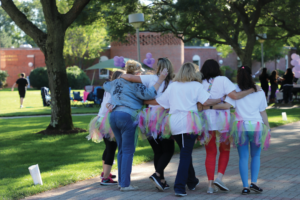 [/media-credit]“Mariana’s Love” went on to raise over $13,000 for cancer research on Saturday, and isn’t stopping anytime soon. Graziella has more plans in the works to raise money in memory of her cousin.

“Teams like that are the reason why we are here today,” co-head chair of Relay for Life at Quinnipiac Elizabeth Monroe remarked. “That is why we do what we do.”

Meanwhile, Monroe was busy having her long black hair cut by some of the university’s fraternity brothers. Her locks are going to be used to create wigs for women battling cancer and experiencing hair loss due to chemotherapy.

Monroe has been an E-board member for Relay for Life for two years now, and is an active part of the program’s continued expansion.

“We’re hoping that this year exceeds last year numbers wise, obviously,” Monroe said. “But, in the end, it’s not about the numbers, it’s about the cause.”

While Quinnipiac has accomplished huge feats through this program, this is only a small part of the huge impact that the Relay for Life organization has had. It began in 1985 in Tacoma, Washington, with a single runner raising $27,000 for cancer research. 32 years later, Relay for Life holds 3,500 events annually, and has 3.5 million volunteers to help the cause, according to Relay for Life’s website. 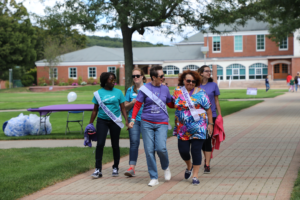 [/media-credit]Quinnipiac’s Relay for Life was the final one in the New Haven area in 2017. Relays will begin again in the spring of 2018; the first taking place on April 20 at Sacred Heart University. Registration is already available on the Relay for Life website. The date for Quinnipiac’s 2018 Relay for Life is still to be determined.

With any luck, next year’s event will top the impressive numbers of this year, and maybe even rival 2009’s record fundraiser. Anything is possible, after all, with a little bit of determination, and a lot of love, and Floriano can attest to that.

“Marianna will always be a part of me, and this is my way of giving back,” Floriano said. “We’ll keep going until we find a cure.”