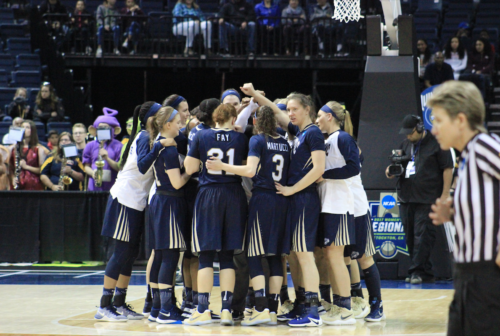 The conference schedule for the Quinnipiac women’s basketball team was released on Friday.

[/media-credit]The Bobcats’ road to defend their MAAC Regular Season Championship begins on Dec. 28 when they host the Siena Saints. The Saints finished in fourth place in the MAAC last season with a 13-7 record. Senior guard Kollyns Scarbrough returns for the Saints after making the All-MAAC Second Team last season.

Another key date on the schedule is Jan. 6 when the Bobcats travel to Iona to face the Gaels. The Bobcats have faced the Gaels in the conference tournament in three of the last four seasons, including the MAAC Championship Game in 2016. The Gaels bring back junior guard Alexis Lewis, who made the All-MAAC First Team last season. The Bobcats will host Iona on Feb. 4.

— Quinnipiac Athletics (@QUAthletics) September 11, 2017
A rematch of the 2017 MAAC Championship Game will occur twice in the upcoming season.

The first game will be on Jan. 15 when Rider comes to Hamden to face the Bobcats. The two teams will meet again on Feb. 23 in Lawrenceville, New Jersey.

With Friday’s announcement, the schedule for the Bobcats is complete as their out of conference opponents were previously announced in July.

The Bobcats start the season in Iowa to face the Iowa Hawkeyes in the Iowa Tip Off Classic on Nov. 10. The Hawkeyes made the NIT last season. The Bobcats will either play Missouri or Western Kentucky the next day.

Dayton, Providence College and Princeton will come to Hamden this season. The Bobcats defeated the Flyers in Dayton last season. The Flyers also made the NCAA Tournament last season, but were knocked out in the first round.

A second Big 10 opponent is on the slate when the Bobcats travel to Lansing, Michigan to face the Michigan State Spartans on Dec. 18. The Bobcats lost to the Spartans 71-54 at home last season. The Spartans were also bounced in the first round of the NCAA Tournament last season.

The MAAC Tournament will take place from March 1-5 in Albany New York, where the Bobcats will look to defend their championship and secure a second straight NCAA Tournament bid.