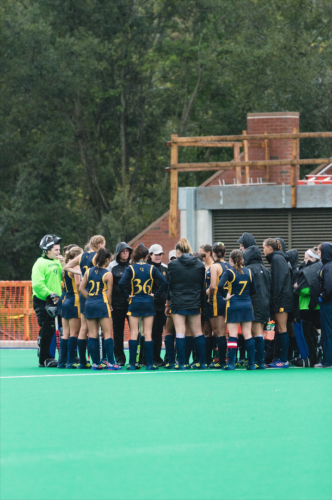 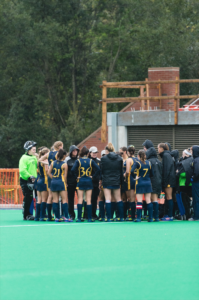 [/media-credit]Since the turn of the decade, the Quinnipiac field hockey team has seen a great deal of success in conference play, going 30-9 against conference opponents from 2010-15.

But 2016 was a different story. The Bobcats went 3-4 in conference play and didn’t make it to the conference tournament.

The 2016 season was Quinnipiac’s first in the Big East, seen as one of the top conferences in the nation and is considered as the line between mid-major conferences and power conferences.

In head coach Becca Main’s 23 seasons at the Bobcats’ helm, she’s seen the program move up from both Division-II to Division-I and then through the Northeast Conference to the Metro Atlantic Athletic Conference.

The Big East is her toughest challenge yet, and 2017 will be the year that the Bobcats will have to prove that they belong in the Big East.

“We are absolutely more aware of what is needed in the Big East,” Main said. “Last year was a totally-blind showing for us in each game. Now we know who the top teams are and we know what it takes to be in the championships.”

The Bobcats also had the disadvantage of having to play their home games on Yale’s campus in New Haven last season.

“Adding that extra 20-30 minutes on the bus ride is stressful (on freshmen),” senior defensewoman Lauren Belskie said. “And you’re not playing on your own home field so it is very different going to Yale having their name on the stadium and not yours.”

Not only do the Bobcats come home in 2017, but a new field awaits them. Main says the university has given the field hockey team more than just a new playing surface with the Quinnipiac Field Hockey Turf Complex.

“There is a huge responsibility to show the university that putting this field was a good idea and that it’s going to help elevate our program along with the other programs at Quinnipiac,” Main said.

Belskie is looking forward to prove that the team deserves to have the new field.

“We just want to show we deserve this field.,” Belsie said. “That we can prove ourselves on this field and I think it allows us to go very far in the Big East this year.”

The 2017 campaign hasn’t gotten off to a great start so far, as the Bobcats are 0-4 in nonconference play,  only scoring three goals in four games. 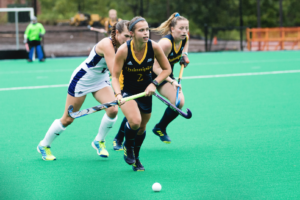 [/media-credit]Main has a tendency to schedule tough out of conference opponents in order to prepare her team for conference play, playing the likes of nationally-ranked No. 12 Boston College and No. 24 Maine.

“We are absolutely more aware of what is needed in the Big East,” Main said. “Last year was a totally-blind showing for us in each game. Now we know who the top teams are and we know what it takes to be in the championships…In the end, out-of-conference games are the time to try new players and new systems to prepare for the conference games, so those games are vital to get the bugs out.”

“Our goals are to finish in the top four teams and be in the championships at Providence College in November,” Main said.

Even though the majority of the team was recruited to succeed in the MAAC, Main believes those players are able to be successful in the Big East with a year of Big East-play under their belt.

“This year is different, and our expectations are much higher so this is a much tougher season because we don’t have the excuse of being the new kid on the block anymore,” Main said. “We still have a team of mostly MAAC Players but they have elevated themselves in such positive ways that we are looking to be playing in November.”

The Bobcats kick-off conference play on Sept. 15 when they travel to the nation’s capital to face the Georgetown Hoyas. Their first conference home game will be on Sept. 22 when they play the Liberty Lady Flames in the QU Bobcat Tournament. They’ll also play schools like Villanova, Providence, Old Dominion, Temple and UConn in conference play.

The Big East Tournament will be played in the first weekend of November at Providence, R.I. between the top four teams in conference play.