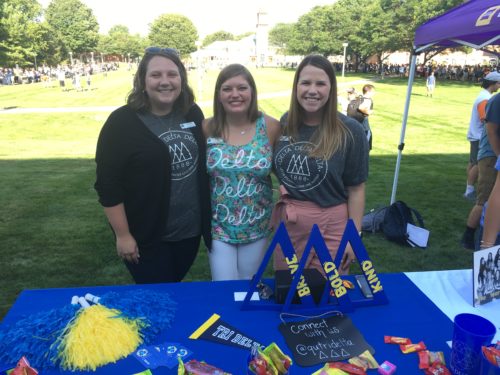 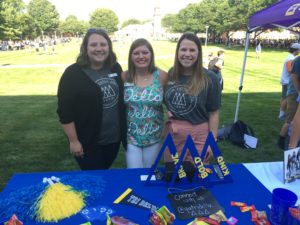 [/media-credit]The values of truth, self-sacrifice and friendship are the foundation behind sorority Delta Delta Delta – also known as Tri Delta. The sorority will establish a chapter within Quinnipiac university during the Fall 2017 semester.

Founded in 1888, Tri Delta has persevered as one of the largest National Panhellenic Conference sororities in America, and sisters of the group wish to invite more women to join them on their fun and fulfilling journey.

Tri Delta strives to empower women to hold themselves to the highest standard, while also encouraging them to be their authentic selves and embrace what makes them unique, according to several representatives of Tri Delta in a statement.

Graduate Assistant for Campus Life for the Office of Fraternity & Sorority Life Bianca Waffenschmidt was one of the members of a committee who was in charge of doing an extension to increase the amount of female sororities on campus.

“The point of doing extension for us was to try and fill the need of Quinnipiac University students that wanted to join sorority life,” Waffenschmidt said. “Our chapters were getting larger because more people were interested, so in order to keep chapter sizes smaller we needed to add more chapters to the campus.”

Tri Delta stood out to the committee for both their alumnae association and their willingness to co Tri Delta also caught the committee’s attention for its dedication to its philanthropy, St. Jude’s Children’s Research Hospital. The sorority is currently working to fulfill a $60 million fundraising commitment to the hospital, which would be the largest financial commitment ever made by a St. Jude partner.

Sophomore physical therapy major Trinity Brandt said that although she is not interested in joining a sorority, she finds Tri Delta’s ideas unique.

“From what it sounds like, the body image thing, that sounds like a really cool idea and something that I know a lot of college-aged girls would like,” Brandt said.

“I think that’s really important, especially nowadays with the way that women are portrayed in certain types of media and just in everyday life,” Wasylak said.

Director of Campus Life for Fraternity & Sorority Life Katherine Pezzella said that Tri Delta will be looking for students from all different parts of campus, especially students who haven’t pictured themselves in a Greek organization before.

“They’re really going to be talking to women at Quinnipiac who haven’t had prior or previously come out for sorority recruitment and really giving them the opportunity to start something new,” Pezzella said. “[Tri Delta is] looking for women who are initiative takers and who have leadership qualities and who are willing to put in the work to build up a sorority from scratch.”

Additionally, the sorority requires women to have a GPA of 2.75 or higher, are able to meet the financial requirements of membership, as well as women who mirror Tri Delta’s ideals of being brave, bold and kind and follow their slogan to simply just, “Bring you!”

“Tri Delta is thrilled to be joining such an outstanding university and campus community,” representatives of Tri Delta said in a statement. “We are looking forward to supporting our members in thriving as campus leaders during their time at Quinnipiac, while also providing them with the invaluable benefits of lifelong Tri Delta membership after they graduate.”