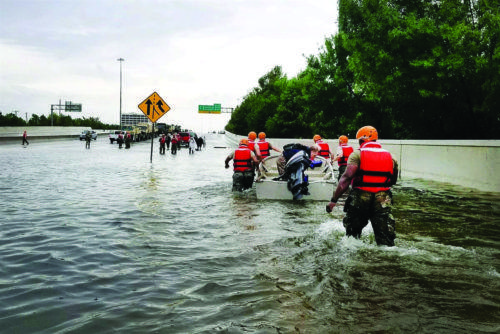 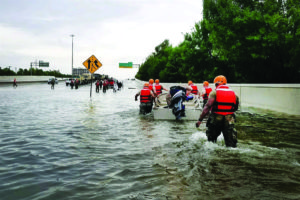 [/media-credit]As Hurricane Harvey crossed over the coastline of Texas on Friday, Aug. 25, Quinnipiac students were settling into their dorms, chatting with new roommates and looking forward to the academic year ahead.

For most of the student body, Hurricane Harvey was the last thing on their minds.

However, this was not the case for student Jacqueline Schmedel or sociology Professor Keith Kerr. Their heads were back home in Texas.

Schmedel is a junior political science major from Fort Worth, Texas. She was playing bingo in the dining hall with her orientation freshmen at 10 p.m. on Friday night, when the storm landed and began its path of destruction.

Although she is four hours north of the coast and the heavily-affected areas, Schmedel’s mind was racing with concern for her friends and family in the area.

“I know many of (my friends) evacuated, but also many of them stayed to help those who are in worse areas,” Schmedel said. “I think the most shocking text I got was from a friend in Beaumont who said that not only did they run out of fresh water, but there are about 300 crocodiles loose around the city.”

On Monday morning, Professor Keith Kerr walked into his sociological theories class, but he had other things on his mind.

Before he began rollcall, he held his cell phone up and explained that his parents, sister and aunt live in the Greater Houston area and he was receiving text updates about the storm and his family’s safety.

He would be checking his phone throughout the class.

Kerr grew up in Brazoport, an area right on the coast and about 20 miles south of Galveston, a 45-minute drive southeast of Houston.

“It is actually a relief to be at work,” Kerr said. “While people in that area are adept at dealing with these situations, the media has made it clear that this is on a scale that I cannot comprehend. This is nothing like we have seen before. Coming to work gives me a break from the images that have been looping non-stop on TV.”

Kerr has been busy trying to keep up with where people have evacuated to, checking river and creek levels, getting updates from friends on specific neighborhoods, and trying to plan ahead to find out when and how to get into the area once the waters recede.

“My parents are now elderly. I said if the creek next to their home were to flood, I would need to help with the clean-up efforts,” Kerr said.“I remember my grandfather once telling me that the hand you give today, may be the hand you are stretching out for help tomorrow. Though I have no doubt that help will come, and is coming from this region of the country. Many here have lived through natural and manmade disasters and so know firsthand, how much help is needed, and will be needed in Texas.”

Vincent Contrucci, director of the  Office of Community Service at Quinnipiac University, offered some legitimate organizations that students can donate to in support of fellow students and professors, like Schmedel, Kerr and many others who are devastated by the storm.

He said that students should text ‘Harvey’ to 90999 to donate 10$ to the American Red Cross, Houston Food Bank, Houston Humane Society, Catholic charities, and Austin Pets Alive, just to name a few.

“The people in Texas are our neighbors, our fellow citizens and what impacts them, ultimately impacts us. It is our responsibility to respond to the needs of those in our country and in our community,” Contrucci said.

Contrucci warns students to make sure an organization is legitimate before donating money or supplies in order to avoid a scam situation.

“In disaster scenarios, we always want to believe that everybody has the best intentions at heart, that is not always true,” Contrucci said. “People have said that they were collecting money for this cause, or that individual or their own needs and it turned out that they were just scamming folks.”

Although Schmedel is hoping that Quinnipiac will support her home state, she knows that fundraising money is not always realistic or feasible for college students.

“There aren’t many places accepting necessities to send down,” Schmedel said. “So more than anything, I would just hope they stay aware of what is happening and not brush it off as a little bit of rain.”

More than anything, she said that she wants students to be aware of what is happening and what the people in southeast Texas are going through.

“Imagine an area the size of Delaware with the population of Manhattan being completely cut off from their homes and everything they own,” Schmedel said. “The drinking water is contaminated, many can’t drive down the street, much less walk out of fear of what could be in the water. People need basic necessities that you rarely think about and every dollar helps.”

As people start to move on with their lives and forget about Hurricane Harvey, another storm is brewing as Hurricane Irma takes aim at the East Coast.

According to CBS News, residents of the Caribbean are preparing for the category 3 hurricane. American Red Cross officials are concerned that the storm will hit the East Coast as well.

Barry Porter, Red Cross regional Executive Director said they are putting a hold on sending volunteers to Houston from the Mid-Atlantic states, according to CBS News. In case of emergency due to Irma in the Carolinas and Florida, Red Cross wants volunteers from those states to stay put.

“The real help is going to be needed in the months and years to come, as people try to clean-up and rebuild their lives and cities,” Kerr said. “I just hope that people do not forget about this event as soon as the next news cycle starts.”