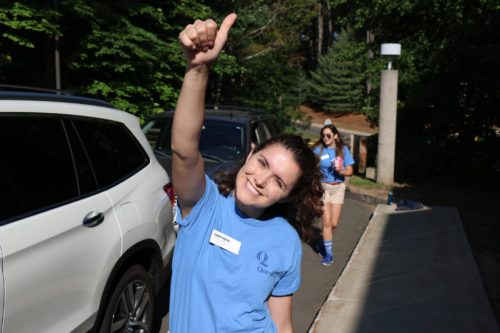 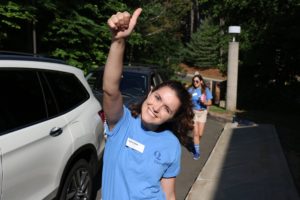 The whistle screams into my ear and I attempt to bust out old dance moves in new khakis that weren’t quite made for body rolls and dropping it like it’s hot. It’s already sweltering hot at eight in the morning and my voice grows hoarse by the hour from screaming and talking non-stop to incoming Quinnipiac freshmen. Yet, I am at my happiest because of these freshmen.

Yes, being an orientation leader is a lot of yelling and dancing and being happy all the time, but that’s not why I tried out for the job in the first place, a little over a year ago, I myself was a bob-kitten in this huge den of college not having a clue what to expect. June orientation was my chance to make my first college friends, live in a dorm for a night and eat Chartwells food. To me there was nothing special about orientation other than getting a first glimpse at my home for the next four years. However, that was before OL’s ripped me and my belongings out of my car and reassured me that everything was going to be okay.

Who were these overly-excited people in blue polos and khaki shorts? Although their outward appearance of energized bunnies initially drew me in, it was their undertones of genuinity that made me want to be like them.

However, I was nowhere near ready for the life altering experience that being an OL would have on my life one day.

Now fast forward one year later and it’s my turn. I was fortunate enough to receive one of the 71 spots to be an orientation leader, knowing that there were hundreds of other qualified individuals who could have easily taken my spot. I felt privileged, like I didn’t have a right to be there. Sure I had been at QU for a year and tried to get as involved as possible, but did that really mean I knew the school or was ready to welcome over 2,000 freshmen?

A lot of people talk about how much of an impact the OL’s have on the freshmen, but what if it’s actually more like the other way around?

Going into the June sessions, I had all my expectations sitting like ducks in a row and boy was I scared. There’s this cliche vision of an OL who is super extroverted 24/7 and is extremely sociable all the time.  I was worried that I wasn’t going to be able to live up to these standards. Granted, I love talking to people more than anything, but if college has taught me one thing so far, it’s that I value my alone time like a rare jewel. Being an OL doesn’t mean that you have a lot of free time.

However, let me debunk one myth right from the get go. There is no ideal OL. This image of a super loud and talkative orientation leader only fits a fraction of the actual staff. It would be counterintuitive if the entirety of the OL’s were that way, and quite frankly orientation wouldn’t be the same.

Of course, energy must be kept up at all times because we want the freshmen to be as excited for college as possible, yet not every freshmen who walks through our gates is going to respond well to that.

Just like any real world situation, the human race is a conglomerate of personalities and ways of expression, so why shouldn’t Quinnipiac be the same way? Diversity should be an integral part of our student body, and having a staff that doesn’t show that diversity would just be a disservice to all. Yet, I have never seen a more dynamic and diverse group of people than this year’s orientation staff.

Of course there were the loud and crazy ones that everyone loves, but there were also the quieter ones who always have the best things to say and then the ones that have that in-between sweet spot that I consider myself to be. Each variable is so crucial to the orientation experience, and ultimately to each individual freshman. Everyone needs at least one thing to connect with in order to have a positive experience, and if there’s nothing you have in common with what is around you, why would you want to stay?

Quinnipiac’s retention rate is around 71 percent according to US News, statistically higher than other private universities. While I’m not trying to say that orientation has any effect on this, in my opinion, it’s a strong factor.

While talking with friends from other universities, I noticed that everyone else’s orientation experience had no comparison to what QU provides. Orientation stresses the importance of what exactly it means to be a Bobcat, spending crucial time on our Legend of the Bobcat and The Creed all which bring a sense of pride and community to the student body. Furthermore, there is one particular aspect that stands out against the rest from the orientation experience that I think really is the catalyst to changing people’s lives. 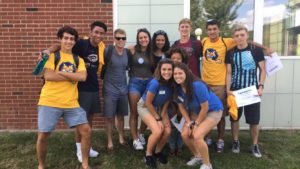 [/media-credit]“Celebrating You at QU” is the section of orientation where diversity plays a leading role. No longer are you in the high school setting of judgement and seclusion, but instead it is encouraged and praised to be different, to simply be you. One of the interns gets up in front of hundreds of strangers and tells their diversity story, a story that makes them uniquely them and can resonate with so many in the crowd, if not everyone.

After each OL group breaks off and takes the following time to truly discuss what it means to be diverse and how QU is a place where you can be yourself, for maybe the first time in your life, no questions asked. It is a time that brings people together and lets them know that the Quinnipiac community will support them no matter what.

It is here where the freshmen made more of an impact on my life than I could ever on theirs. Seeing a raw sense of self awareness within each of them was beyond beautiful and they inspired me to be braver, to be comfortable in my own skin and that despite whatever tragedy I face, you can turn out stronger in the end.

Never before had I felt such love in a group of people that I didn’t know too well, and it reminded myself of why I chose Quinnipiac to begin with and why this place is truly a home like no other. Even as an orientation leader, the purpose of our service can get swamped up in things that take too much of our time away from the thing that matters. The blue and gold are only a portion of who we are, but it’s more about making the freshmen experience a positive one, in body, mind and spirit.

Yes, the four years of college are what we are trying to prepare them for, but shouldn’t we also be preparing them for life itself? In my experience, Orientation at QU does that and while it’s not perfect by any means, it’s a start, and a pretty great one at that.