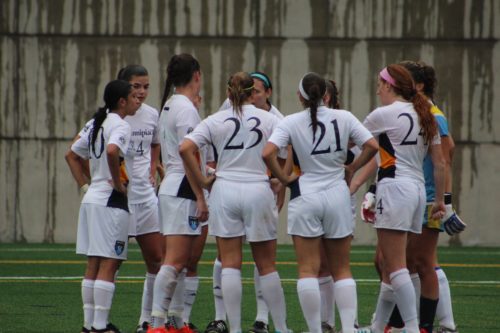 The Quinnipiac women’s soccer team fell to the Miami Hurricanes, 3-1 on an overcast Sunday matinee on the Quinnipiac Soccer and Lacrosse Turf Complex. The matchup marks a step up in conference play for the MAAC competitors, as the bout was Quinnipiac’s first against an ACC opponent in the program history. 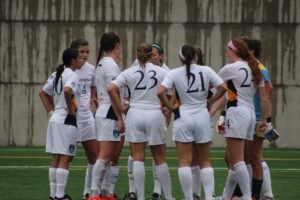 [/media-credit]The Bobcats came into the match on a two-game winning streak, while the Hurricanes had dropped two losses in a row. Field conditions were a factor as well, as it rained steadily all match. Nevertheless, both teams came out and played through the adversity, particularly both goalies, who remained poised in the slippery conditions.

The first half of the game was in favor of the visiting Hurricanes as they kept possession in Quinnipiac’s side for most of the half. In the first half alone, Miami unleashed seven shots on net, yet only scored its first goal with three minutes left in the half on a multiple-shot effort by Lauren Markwith.

The first half was a steady onslaught from the Miami offense and up until the first goal, Quinnipiac sophomore goalkeeper Olivia Myszewski had been on a tear, making diving efforts to save the Hurricanes’ shots on net.

Quinnipiac handled the first half well enough and even came out of halftime with energy.

The second half began with an even heavier downfall of rain, but players on both sides had nothing but cheerful expositions as they warmed up. Thus, the first half began with optimism for the Bobcats as they battled back from being down 1-0 at halftime.

The Bobcats began the second half with a brilliant goal from junior Nadya Gill, who slipped through multiple Miami defenders down the middle of the pitch and ripped a shot across from the top right of the 18-yard box, into the left side of the net.

However, Miami went back on the offensive side of play after Gill’s goal, stringing consecutive goals together against the Bobcat defense and eventually bringing the score to a close with 3-1 victory.

The second goal for the Hurricanes came at the 74th minute by Michelle Giamportone, followed by the third and final goal of the game at the 78th minute. Freshman Jamie Brunworth’s hard strike from well outside the goalie box was the final goal.

After that point, the Bobcats looked to be fatigued, but still put in the effort until the last whistle.

“You learn the difference in terms of the ability of the players, the athleticism, size and strength and just the speed of play,” Clarke said. “Our players need to see that, you can’t assume that you’ve got them.”

Myszewski, who stopped 11 shots says the challenging game against an ACC team proved to be a great stepping stone for the Bobcats to continue to improve.

“I think we matched them pretty well in the first half, it’s just unfortunate in the second half with the two goals [scored against us]. But I think next year if they come back it might be closer, and we might even win.” Myszewski continued. “If we treat each MAAC game like how we [treated] this game, our team is going to be unbeatable.”

On Sep. 10, the Bobcats seek to improve to 4-2 in their next game on the road against Dartmouth.