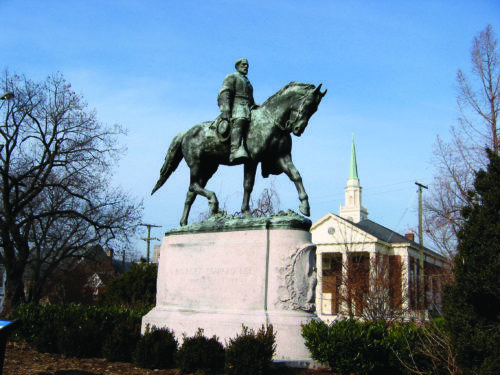 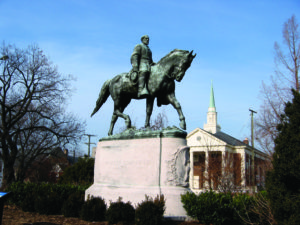 [/media-credit]In the wake of a protest in Charlottesville stemming from a confederate statute that led to the death of a woman and the injuring of several others, there are questions circling about what it all means especially in respect to Connecticut.

The protest began late Friday night, Aug. 11, when about 250 torch-bearing White Nationalists, Neo-Nazis and other supporters held a protest on the University of Virginia Campus in Charlottesville, Virginia. They marched together in protest of the city’s planning to remove a statue of a Confederate General and the nixing of his name from the city park where the statue resides.

The following day, a “Unite the Right” rally was held and that is when various news sources reported a faceoff between White Nationalists, Neo-Nazis and counter-protesters. Fights among the different factions erupted and resulted in the death of 32-year-old Heather Heyer when an alleged white nationalist drove his car into a group of counter-protesters. James Alex Fields, 20, was arrested and charged with her death.

It’s now been argued for weeks over the back and forth of whose fault it was and who should be to blame, or even share the blame for that matter. Whether you side with the left, right or reside somewhere in the middle, one thing remains clear: protesters and counter protesters were drawn to Charlottesville that day because of the statue of a confederate general.

General Robert E. Lee’s statue, to date, lives in a Virginia state park and resided there with its lingering controversy until a year and a half ag o when a high school student in Virginia started a petition to have the statue removed. The city’s mayor took up the petition and furthered the movement. Public hearing occurred and alternate options were recommended, but ultimately the council ruled to have the statute sold and renamed the park “Emancipation Park,” according to CBS.

As a result, a torch lit march ensued headed by a University of Virginia alum, Richard Spencer, who hosted a Nazi rally in Washington D.C. in November after the election of Donald Trump, according to The New York Times. Then in July police arrested more than 50 people at a Klu Klux Klan rally in Virginia protesting the statue’s removal. After the torchlit march led by Spencer the night prior, the “Unite the Right” rally marked the third march by white nationalist groups in Charlottesville since the City Council voted to remove the statue.

Philip Goduti, an American History Adjunct Professor at Quinnipiac University, explained that Robert E. Lee came into prominence after the Battle of the Seven Days in 1862 and became a symbol of the Confederacy come the end of the Civil War.

“Confederate statues were put up at the end of the nineteenth century and the start of the twentieth century,” Goduti said. “ It was largely a way for the Civil War generation to memorialize their actions in the war, as many of them were dying. It contributed to the ‘Lost Cause’ movement where former Confederates depicted the efforts of the Confederacy as heroic in the face of insurmountable odds, a form of revisionist history of the Civil War.”

However, as times shifted forward the views on the statues shifted as well, Charlottesville a clear indication of such. Though some people believe the removal of the statutes is an attempt to erase history, Goduti disagrees.

“There is a difference between history and memory,” Goduti said. “ These statues are memorials and a testament to a memory of the war. The history surrounding them is a different issue altogether. Taking them down is just as significant as putting them up… We are not erasing the past by taking them down. The act of removing them signifies the current thinking of the times and contributes the on-going historical narrative.”

While Connecticut doesn’t house any confederate statues to date, it does have a history with the Klu Klux Klan (KKK), according to Matthew W. Hughey, a professor at the University of Connecticut’s Africana Studies Institute.

In an interview with the Hartford Courant, Hughey explained that places like Connecticut act as a “home for a variant of ‘suit and tie’ white nationalism [whose members] labor very hard to present themselves as legitimate and mainstream.”

Hughey later said, “While the form of the demonstrations here might vary, their underlying logic has been and would be similar.’’

In September 2016, there were complaints in Wallingford after several people spotted a mannequin dressed in KKK garb and put on display visible from Route 5, according to a local Fox affiliate.

The following month, police opened an investigation into a 45 second video that was taken at a party in East Windsor. According to the Hartford Courant, a party-goer can be seen dressed in KKK robe while waving a Donald Trump campaign flag.

While white nationalism may take a different form in Connecticut, events the likes of Charlottesville aren’t just contained to the South. In July, white nationalist group “Proud Boys” rallied on the New Haven Green and were met by counter protesters including Black Lives Matters and resulted in two arrests, according to a local Fox affiliate.

Connecticut has four active hate-groups, according to the Southern Poverty Law Center, a U.S. non-profit organization that monitors the activities of domestic hate groups. Act for America, National Socialist Movement, White Lives Matter and New Black Panther Party for Self-Defense are all present in the state.

The state is also the site of more than 50 universities and colleges, which have become a focal point of groups capitalizing on the first amendment. For example, the Charlottesville protest targeted the University of Virginia. Meanwhile, a White Lives Matter group had a rally planned at Texas A&M University on Sept. 11, according to The Washington Post . The university has since canceled the event, and in its wake other universities have responded in other ways.

At Quinnipiac University, in an email to the university community, Executive Vice President and Provost Mark Thompson issued a statement addressing the events in Charlottesville pinpointing the university’s values.

“The violence, hatred, bigotry and intolerance demonstrated by white supremacist and neo-Nazi groups in Charlottesville have no place in our world and certainly have no place within our university community,” said Thompson, “Acts of violence and hatred run counter to our values as a community, and each one of us has a responsibility to ensure that these despicable types of behavior do not occur here.”