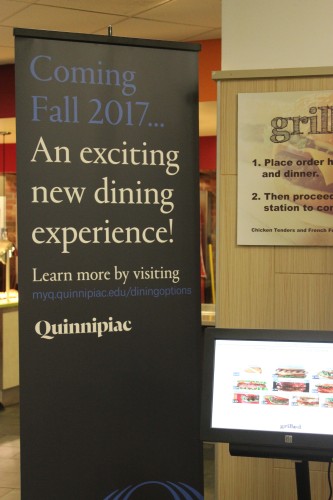 Quinnipiac students see her everyday while checking out at the caf, but some may not know the internal struggles that Chartwells employee Leyanda DaSilva is facing.

In 2014, DaSilva was diagnosed with breast cancer. After many rounds of chemotherapy and radiation, she became cancer free in 2016.

A few weeks ago, DaSilva went in for a check-up and was told the cancer had spread to her lymph nodes. She was diagnosed with stage 4 breast cancer.

Junior nursing student Becca Denning has befriended DaSilva during her years at Quinnipiac. Denning said she always goes to DaSilva line to check out at the caf and would spend hours talking to her sometimes.

“Leyanda and I are friends on Facebook and she posts statuses to update everyone on how she’s doing. The other day she posted about being diagnosed with stage 4 breast cancer, so I reached out to her,” Denning said. “I was asking about her plan of treatment and she’s still trying to figure it out but because it’s so expensive she’s still unsure. So I thought about how Quinnipiac as a community could help.”

Denning posted a GoFundMe campaign link in the Quinnipiac class Facebook groups to help spread the word on Friday, Aug. 4. Her fundraising goal is $2,000. As of Saturday afternoon, it has reached $242.

Denning said DaSilva did not expect her support system to grow as much as it has.

“She is so humble and would never ask people for money but I know how much medical bills can be,” Denning said. “She has changed my life just by talking to me everyday so I’m trying to change hers… She has three kids, one she’s sending to college and two little boys that need their mom, so I’m helping them with that.”

Donations to the fundraiser can be made here.