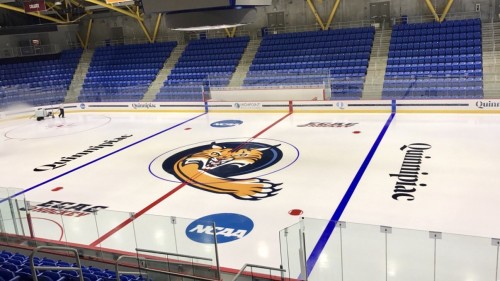 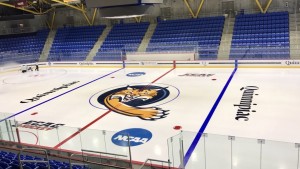 October is starting to feel a little closer these days.

On Friday, both Quinnipiac men’s and women’s ice hockey released their regular season schedules for the upcoming 2017-18 season.

Coming off of a 23-win season, highlighted with an ECAC Hockey Semifinal appearance, the Bobcats look to improve in 2017-18.

After an exhibition game against St. Mary’s University (Halifax, Nova Scotia, Canada) on Oct. 1, Quinnipiac men’s ice hockey opens the regular season on the road at Boston College on Oct. 6.

The Bobcats return to Hamden for their home opener on Oct. 8 against Boston University. 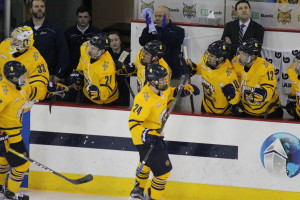 With all of October being non-conference games, the Bobcats start ECAC Hockey play on Nov. 3 against Cornell at home.

Over the last four seasons the Quinnipiac-dubbed ‘Yale game’ has been in the final weekend of the regular season. But for the first time since 2013, Quinnipiac and Yale play for the Heroes Hat in November. The Bulldogs will take the drive up Whitney Ave. to Hamden on Nov. 18, the weekend before Thanksgiving.

In November alone, Quinnipiac plays in seven conference games, while a home-and-home series against UMass Amherst on Nov. 24-25 is the only non-conference competition of the month.

Moving forward, December means an entire month at home, while January marks a month of travel.

In December, the Bobcats play all four games at home as they welcome Harvard, Dartmouth and Maine.

Then, — aside from a home game against Princeton on Jan. 30 — each of Quinnipiac’s games in the first month of 2018 are away from High Point Solutions Arena.

The Bobcats begin the new year at the XL Center in Hartford against UConn on Jan. 2, before traveling to Colgate, Cornell, Harvard and Dartmouth in the ensuing weeks. Finally, on Jan. 19-20, the Bobcats make their inaugural trip to Arizona, where they look for revenge against Arizona State on the road.

After the busy month of January, the remainder of Quinnipiac’s regular season schedule concludes with eight straight ECAC Hockey games.

While half of the games are in Hamden, the other four are on the road. Most notably, the Bobcats close out the regular season in North Country, where they face both Clarkson and St. Lawrence on Feb. 23-24 in hostile environments.

The 2016-17 was an atypical one for Quinnipiac women’s ice hockey as it made an early exit in the first round of the ECAC Hockey Tournament.

Despite the playoff struggles, the Bobcats carried a 21-10-6 overall record last season, but look to gain their momentum back, starting with an exhibition game at home on Sept. 24 against Concordia University (Montreal, Quebec, Canada). 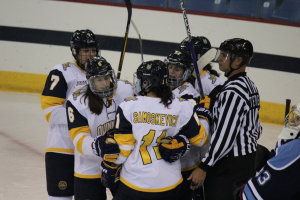 The regular season begins on the road as Quinnipiac opens play at Maine on Sept. 29-30.

Spanning from Oct. 27 through Jan. 13, 18 of Quinnipiac’s next 20 games are all conference matchups. One of the non-conference games amidst the flurry of home appearances comes during the 2017 Nutmeg Classic at High Point Solutions Arena, in which the Bobcats face one of either Penn State or UConn.

Quinnipiac welcomes New Hampshire to Hamden through a back-to-back series on Jan. 26-27. Last season, the Bobcats defeated the Wildcats by a score of 3-0 at the Whittemore Center in New Hampshire.

Finally, Quinnipiac closes out its regular season with a pair of ECAC Hockey games. The first is at Brown on Feb. 16, while the regular season finale is the next day at Ingalls Arena in New Haven against Yale.