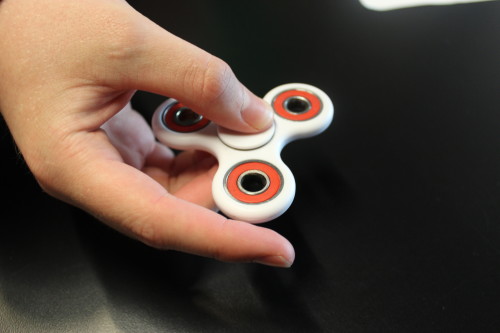 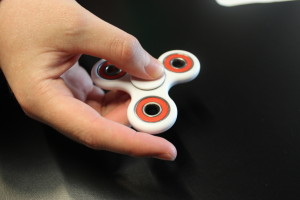 Pocket-sized, handheld fidget toys are flying off the shelves. These items are aimed at those suffering from ADD, ADHD, anxiety and Autism, according to a Quinnipiac University press release sent on Monday afternoon. Fidget spinners are popular amongst children, tweens and teenagers alike.

Companies like Amazon market a spinner that is able to eliminate boredom and stop bad habits such as nail biting, pen clicking and knuckle cracking, according to the press release.

Judy Falaro, assistant teaching professor of education at Quinnipiac University, commented on the pros and cons of the fidget spinners in the university press release.

“We know that for people with ADHD, using a ‘fidget’ of some sort can be very positive. There are any number of choices from chewing gum to squeeze balls or elastic bands on the bottom of a desk chair to kick,” Falaro said in the press release. “There has also been great success with movement breaks. Standing desks have also provided great results for people. These new spinners seem to provide more of a distraction.”

“It’s made concentration seem less tedious and tiresome,” Geffner said. “I can pay attention in class with a stronger focus because I have an escape for all my energy.”

Falaro also added that the fidget spinners have become popular and are being used as toys by many students, according to the press release.

“They diminish in value as an accommodation for those who may need one,” Falaro said. “Overall, there are many other proven strategies for aiding those with ADHD. One of the most basic is to design engaging lessons. As for those people with Autism, spinners would likely increase self-stimming behaviors, which is the opposite of what we try to accomplish.”

Fidget cubes have also been circulating around recently. Sophomore computer information science major Vincent Deriu uses his fidget cube when he is tempted to open his laptop during class.

He purchased the fidget cube a few weeks ago with hopes it would alleviate some of his habits, like clicking his pen and tapping his foot.

“The fidget cube is something to fool around with while taking notes or watching a video presentation in class,” Deriu said. “You can click it, press it, spin it, and it always helps me concentrate.”

Deriu prefers the fidget cube over the spinner because he said the spinner requires two hands.

“I recommend the cubes over the spinners due to the size and the variety of buttons and switches included.”

While there are positive benefits, schools across the country are banning toys from classrooms because they pose as a distraction for kids.

Mark Rapport, a clinical psychologist from the University of South Florida, told Live Science that a spinner-like gadget is more likely to serve as a distraction than a benefit for individuals with ADHD.

Rapport also said the spinners are visually distracting for children who do not have them and guide students’ attention away from the lesson.

According to NBC Boston, Nissitissit Middle School in Pepperell, Massachusetts banned the toy, and school administrators said the spinning has gotten out of control.

These spinners are available for roughly $8 at local stores such as Five-Below, 7-Eleven and Tedeschi Food Shops, according to NBC Boston.