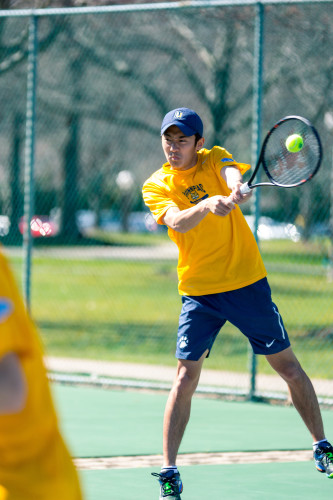 With the Quinnipiac spring athletic seasons coming to an end, it’s time to recognize some of the most outstanding coaches and players this season had to offer. Justin Cait, Logan Reardon and Conor Roche give you their thoughts.

There is no other way to put it: Quinnipiac golf head coach John O’Connor did a spectacular job this season. He was responsible for recruiting freshman Alexandra Sazhin, who won MAAC Rookie of the Year and MAAC Player of the Year honors. On top of that, O’Connor won 2017 MAAC Women’s Golf Coach of the Year for the second consecutive season. – JC

Miller led her team to its fourth straight MAAC Championship, and it has yet to lose a MAAC match (36-0) since entering the league four years ago. Not only were the Bobcats 7-0 in the conference this year, they won every single match by a score of 7-0 or 6-1. These girls were simply dominant in the MAAC, credit to Miller. – LR

Miller’s squad continues its domination with a senior class that did not lose a MAAC match in its collegiate career. Women’s tennis continues to be among one of the more overlooked teams on campus, and is now one of five Quinnipiac programs that made it to an NCAA Tournament this year. – CR

Junior Jessica Lee carried her tremendous indoor track and field momentum right to the outdoor track and field season. Lee became the first Bobcat hurdler in program history to qualify for the finals of a Penn Relay event, then placed third in the 100-meter hurdles on Saturday. She also holds the conference’s top time (13.56) out of all 100-meter hurdles this season. – JC

Ezaka, a senior, broke the Quinnipiac all-time wins record this year on April 5 when he picked up his 138th career victory. He has been the anchor for the Bobcats at first singles for all but two matches this season, and helped lead the team to the MAAC Tournament as the No. 3 seed. Ezaka has led by example and paved the way for the future of Quinnipiac tennis. – LR

Drake has been one of the MAAC’s best hitters this season as she is second in batting average and hits. Drake is also among the league’s best in slugging percentage and doubles. The sophomore is one of the key factors as to why the team is looking to make a late-season push for consecutive MAAC playoff appearances. – CR

Another year, another freshman sensation for Quinnipiac golf. Her play pushed Quinnipiac to a second consecutive MAAC Championship and NCAA Tournament berth. Sazhin won MAAC Rookie of the Year for her breakout efforts. On top of that she took the 2017 McLeod Trophy, awarded to MAAC Women’s Golf Player of the Year.  – JC

Sazhin burst onto the scene as the best freshman of the spring. She won the McLeod Trophy given to the MAAC Player of the Year, and also won MAAC Rookie of the Year after posting the top score among freshman. She was an instrumental piece for the Bobcats this season, which is still in progress, after their MAAC Championship and NCAA Tournament berth. – LR